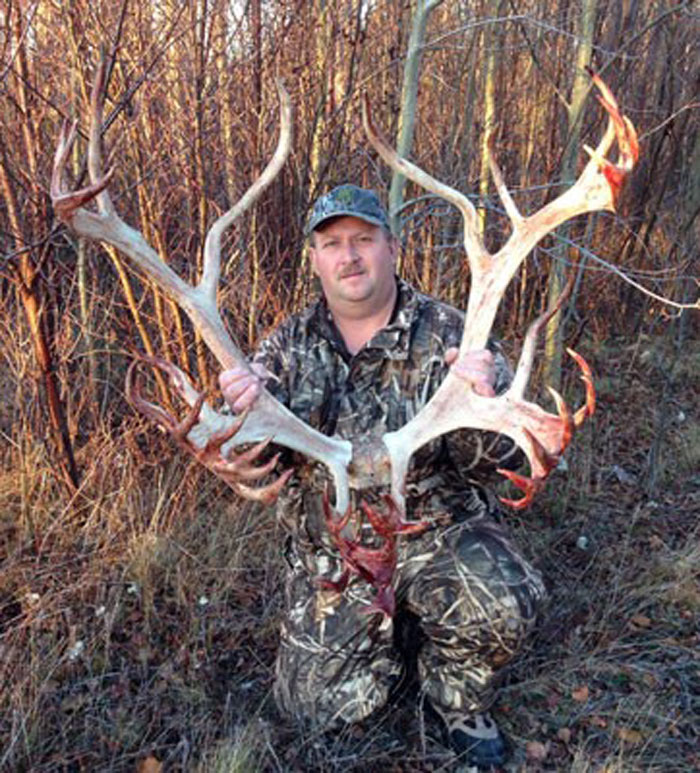 JEFF SAMSON POSES with the antlers of his World Record Woodland Caribou tagged in 2013. The giant Newfoundland stag bested the 1966 record by nearly 30 inches and won the Pope and Young Club’s Ishi Award for a truly outstanding big game animal.

JEFF SAMSON HAD BEEN THINKING more about tasty blueberries than record-class caribou antlers in early September of 2013. But as Jeff and his wife searched for patches of ripe berries in the Middle Ridge area near Gander, Newfoundland, the sudden sight of a giant woodland stag feeding nearby snagged their attention. One look was enough. Jeff hustled home to grab his bowhunting gear.

Several frustrating stalks later, everything finally fell into place when Jeff managed to slip within 15 yards of the browsing bull. A single well-placed arrow dropped the caribou and in due time rewrote the Pope and Young Club record book.

“I knew it was big when I killed it,” Jeff was quoted by a Gander Beacon reporter,” but I didn’t think it was world record material.”

More of a meat hunter than a collector of oversized antlers, Jeff was honestly surprised when his rough measurements easily exceeded the official score of Dempsey Cape’s existing world record stag. That impressive mount, incidentally, is on display at the Pope and Young Club/St. Charles Museum of Bowhunting in Chatfield, Minnesota.

Way back in 1966, Cape and Newfoundland guide John Newhook had ventured deep into Victoria River wilderness for another September caribou adventure. Early in their hunt, Cape had spent four hours easing close to a large stag … only to miss the 30-yard-shot in a sudden downpour.

Disappointed, Cape didn’t have long to wait for a chance at redemption. The very next morning, Newhook spotted an even larger stag. But the caribou was at least a mile and a half away crossing a flat valley floor en route to wide-open terrain where stalking would be next to impossible.

In preparation for this caribou adventure, Cape had run or hiked at least five miles daily to build up his lungs and leg strength. “I was in good shape,” Cape recalled, “and it paid off.”

Bowhunter and guide hurried to close the distance and set up ahead of the nomadic stag. “I made my way onto a rocky terrace 40 yards from the moving bull,” Cape said. “My arrow flew true and he was down in short order.

“I didn’t realize how big the rack was until I got back to the airport and compared it with the smaller racks brought in by gun hunters. As I stood there, an indescribable feeling welled up inside me and I knew the full meaning of a bowhunter’s pride.”

The Dempsey Cape stag was officially scored at 345-2/8 inches and held the top spot in the P&Y Woodland Caribou category for almost five decades. Jeff Samson’s 2013 stag was panel measured at a whopping 375-0/8 inches, bettering the old World Record mark by not quite 30 inches. The Samson caribou also earned the prestigious Ishi Award, which is the Club’s highest award and is bestowed occasionally to any truly outstanding big game animal deemed deserving of special recognition.

ON A PERSONAL NOTE, I have a special interest in big Woodland Caribou, having taken a giant Newfie stag of my own during a 1999 bowhunt in the same Middle Ridge hunting area where Jeff Samson scored on his giant ‘bou.

Arriving from a Quebec/Labrador caribou camp in late August of 1999, I’d planned to spend a few days afield along the Gander River with outfitter Gerard Beaulieu. Dennis Dunn, a longtime Pope and Young Club member from Washington State was also in camp. He’d arrived a day earlier and already had located and photographed a giant stag. This news made me anxious to begin my own hunt.

As luck would have it, despite steering clear of the area Dennis and his guide were hunting, Gerard and I encountered the huge stag as we returned to camp after a long day of glassing, walking, and spotting distant caribou. And in spite of having a young stag bust me as I was drawing on the giant ‘bou, I eventually got a second chance and put a sharp broadhead through the stag’s heart at just over 15 yards. He dropped less than 30 yards away.

My Woodland Caribou officially scored 320-4/8 inches, nearly 25 inches smaller than Dempsey Cape’s stag. Yet as I recall, it ranked fourth or fifth in the world at the time and still ranks in the Top 10 overall. Undoubtedly, it’s the largest Newfoundland stag I’ll ever tag.

In part that’s why I was truly pleased to meet Jeff Samson at the 2015 P&Y mid-April Convention in Phoenix , shake his hand, and congratulate him on arrowing a once-in-a-lifetime big game animal. While I’ll never take a World Record myself, I’m immensely proud to walk in the footsteps of Dempsey Cape and Jeff. I clearly understand what an accomplishment it is to take the very best of any big game species!