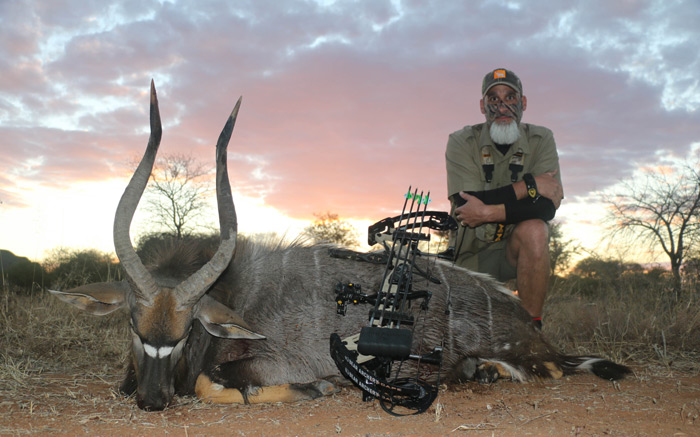 His Spiral Slam completed the author will make a full body mount of this life-time trophy Nyala.

Over the past 6 years of traveling to Africa one of my primary goals was to complete the Spiral Slam with the bow.  This particular slam is made up of the Kudu, the Eland, the Bushbuck and the Nyala.  It took this period of time, not necessarily because of opportunity but more because of being able to financially deal with and with my priorities on my overall list of African Species.

This year I was blessed to be hunting at Doornrand Hunting Safaris with Danie and Louise Krige.  I have known Danie since my very first trip to South Africa and this year we switched our Limpopo hunt offering to the operation he runs due to unforeseen integrity issues with our former safari.  Change is never a comfortable thing but in this case it ended up being as great of a move as we have made at Journey Hunts.  The care and service we received and the hunting itself ended up being beyond our expectations and we now have found ourselves in the ideal African scenario.

I had hunted three of the 4 species over the past few years and had been able to harvest excellent trophies.  My Kudu was the first African species I ever harvested and was 57”.  I may never see a Kudu bigger yet alone have a chance to harvest one.  My Eland was an old warrior that was 34” and was all worn down with age.  My bushbuck is a whole different story.  I harvested a great bushbuck, actually while hunting with Danie as my PH.  I shot it right before dark and because it is such a dangerous animal we left it for the morning.  It was a lung hit but it had gone into a very thick section of bush so we backed out and decided to play it safe.  When we got back in the morning the hair was all over the place and the bushbuck was gone.  It had been drug to the Limpopo River by huge croc that came about 90 yards to dead bushbuck to claim it for its own.  I have the kill for sure but no pictures to verify it.

That left only the Nyala to complete the Spiral Slam.  This year I decided that would be my number one animal to hunt at Doornrand with Danie.  We were going to arrive there three days before any clients would arrive so we could check everything out and also get a bit of hunting in.  It was quickly evident that they had great Nyala all over the property.  I saw a ton of good bulls on the property right away.  We were looking for a good bull that would be perfect for me to stalk into with the bow.

On the first night we found a bull that I really liked, sparring with another bull by a water hole.  We stalked straight in on him since he was so preoccupied with the other bull.  I got to 27 yards and he was slowly walking parallel to me.  I drew back and decided to take a shot while he was slowly walking.  I underestimated the speed he was moving and hit him a bit back.  He ran out a bit and stopped as I quickly grabbed another Black Eagle arrow from my quiver and put my 40 yard pin on him.  He was quartered away and this shot was picture perfect.  He went another 30 yards and was down. The Grim Reaper again, did its job.

My Spiral Slam was now complete.  This bull measured at over 25” and was just beautiful.  This is one of if not the most beautiful plains game animal there is. Due to that fact it will have to become a full mount from Troy Hawkins of Hawkins Taxidermy for sure.

The pursuit of the Spiral Slam is one of many package hunts we offer from Journey Hunts.  If you are interested in this or any other African packages you can check them all out at www.journeyhunts.com.