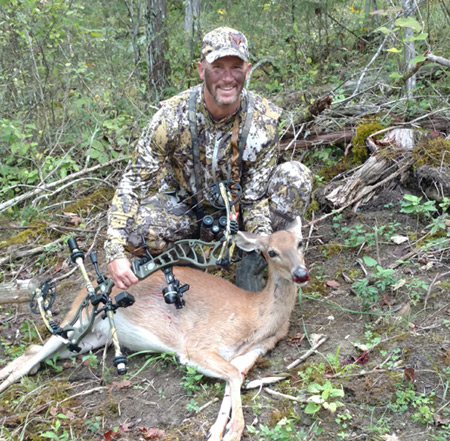 Hurricane Harvey and a Full Moon

A week before my trip to River Valley Whitetail Outfitters, in Lewis County Kentucky, the Texas Coast was being hammered by Hurricane Harvey. As I do every Monday, I went to coach my son’s soccer practice. Not two minutes into practice I stooped to get a rolling ball and I put my back out! I scrambled to make an appointment at my chiropractor and physical therapist and hoped my back would be well enough by Friday to make the drive to Kentucky.

I spent the next few days slowly packing my gear, hoping I would get the chance to use it. I saw the chiropractor on Wednesday and he helped me feel a little better. That evening I went to my basement and grabbed my bow, hoping I would be able to draw it back without any pain. As I slowly drew the bow I felt just a tiny bit of pain in my lower back. Maybe my back wouldn’t be an issue for my trip.

On Friday morning, September 1st, I was scheduled to see my physical therapist. I took my kids to school, dropped them off and headed to my appointment. On my way there the office called me and said my appointment had to be switched to September 11th. I thanked them, turned my truck around and headed home to finish packing for my trip. My PT visit would have to wait.

After arriving home, it took me a few minutes to make sure I had everything packed in my truck. The further I drove south the darker the sky grew. By the time I hit Columbus, Ohio I could see the weather was getting bad. The last three hours of my trip were in a driving rain storm. Looking ahead for the morning the weather did not look promising.

I arrived at River Valley Whitetail Outfitters and was greeted by Shannon Cooper, the owner and the two guides, Lee Salsgiver and Danny Connelly. We talked about the weather as we waited for two other hunters to arrive at camp. The hunters arrived and we all had a great dinner and conversation.

The 4:15 am alarm went off and I jumped out of bed and listened for rain. I couldn’t hear any hitting the roof so I jumped into the shower and went through my ritual to become scent free. I ate a light breakfast of fruit and listened as Danny, my guide, explain we would be going to a shooting house, on a ridge that overlooked a food plot with a new bean field behind it. Sounded like a great spot for my morning hunt. I checked my gear, grabbed my backpack, picked up my bow and we were out the door.

Danny led the way as we headed to the elevated shooting house. The rain started to fall lightly as we approached our spot. Once we were situated in the shooting house the heavens opened up and it poured! We waited in the dark as the sun was slowly peaking over the hills. We quietly talked about bucks that they had seen on the farm and the food plots they had planted in late summer. 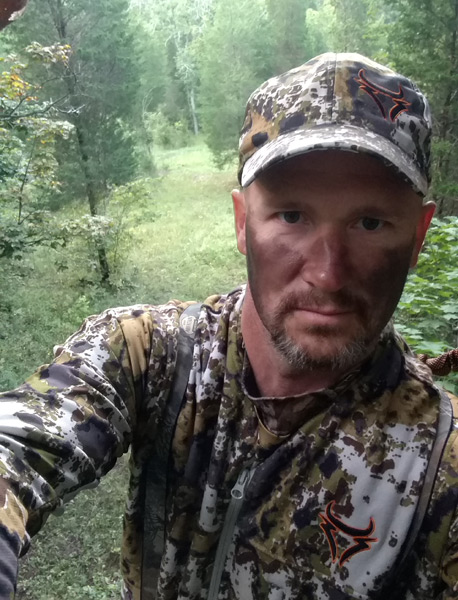 Slowly the sun climbed into the sky and the rain began to slow. Danny commented on how the wind and rain from the hurricane would probably slow the deer movement a bit. None the less we watched the food plot and beans for any movement of a mossy horned giant buck. By 10:30 the rain had stopped and we decided to head back to the lodge for lunch. We had stayed dry and the spot was very promising.

The evening weather was very odd! It was eerily calm with no wind so I could hear almost everything around me. The food plot was full of luscious, green, browse and it was sure to attract some deer. With about a ½ hour of light left I could hear turkeys flapping and heading toward their evening roost. From my right I could hear the familiar sound of deer walking. Two yearlings emerged into the food plot, their mother more cautiously entered the plot. I had three doe tags in my pocket and it would be nice to have some fresh backstraps for dinner. I watched the deer eat in the plot and I decided I would just pass on these does. It was only the first night of my hunt and I would have a few more sits to try and harvest a doe.

The evening light faded and the orange sun ducked quietly behind the hills in the west. I let the dark embrace me as I packed my gear and headed back to the lodge. Once back at the lodge, we all talked about our evening hunts. The conversation switched to the Saturday morning weather and the nearly full moon that would be coming up in the early evening. We all hoped the morning hunt would be successful. We each wanted to be the first person to harvest a buck.

Saturday morning came quickly and again I was up early and in the shower. Danny met me and we were out the door. He had picked a double stand for the morning hunt so he would be able to video me hunting. Our set was overlooking a food plot and a mineral lick. In Kentucky, you are able to hunt over mineral licks during the season. Together we made the walk into the woods to our stand. I made my way carefully up the ladder stand and was quickly set up ready to go. Danny climbed in next to me in a Loc-On stand and we listened as the woods came to life.

A symphony of song birds sung to us as the sun rose slowly. An owl called for a mate and landed in a tree 15 yards away. Turkeys called to each other as they wanted to meet for their morning parade.  There was not one stitch of wind and the temperature was in the low 50’s. I was pumped about my chances for the morning sit. My Revelation 6 fixed with a Black Eagle Zombie Slayer, and a Grim Reaper broadhead, hung to my left. I sprayed down with some Essence of Fall just to be sure my scent was contained and we waited quietly and patiently for any movement.

Danny saw the deer first as they moved behind a blowdown. He whispered for me to grab my bow and get ready. He was not sure what was coming as he had only seen the legs of the deer. I grabbed my bow and hooked up my release. A doe came around the corner into the open. Two other mature does followed. None had any fawns with them so Danny told me to shoot the big one for dinner. The big doe closed the distance to 37 yards and then turned broadside. I drew my bow, found my anchor, leveled my pin and released my BEA arrow. Danny had the camera focused on the doe as my arrow left my bow. The arrow was streaking for its mark when, at the last second, the doe ducked,  the arrow skimming her back. I was speechless as she and the two other does ran down the hill.

Danny said, I think you just hit her high! I didn’t know what to say. I asked if he had gotten the shot on film. He replied, “Yes” so I asked to see the footage. At first I did not see it but once I slowed it down I saw what had happened. That doe dropped and nearly put her chest to the ground. My BEA had glanced off her back. I gave Danny the camera and I went to check my arrow.

I found my arrow easily and looked it over. As the footage showed and I suspected, no blood or hair.  I had always heard about deer ducking arrows but in all my years it had never happened to me. Now it had.

I returned to the stand, discussed leaving but decided we would stay till 10:30 just to make sure we did not miss an opportunity.  I can honestly say I was pretty disgusted in myself. I shoot 40 yards in my yard almost daily and have no issues. That doe had ruined my dinner plans.

Time was ticking by slowly and I was getting restless as I looked down the hill and saw a lone doe walking our way. She was a good size and I wanted redemption. I grabbed my bow and waited for her to give me a shot. She milled around for about 5 minutes before she settled at 37 yards, broadside. I repeated my shot sequence again and slowly let the pin float. This time the results were different. The arrow was true and the Grim Reaper did its job. The doe kicked and went about 20 yards before crashing. We heard her get up and it was over. Danny said, “I got that one on film and it was a good shot.” 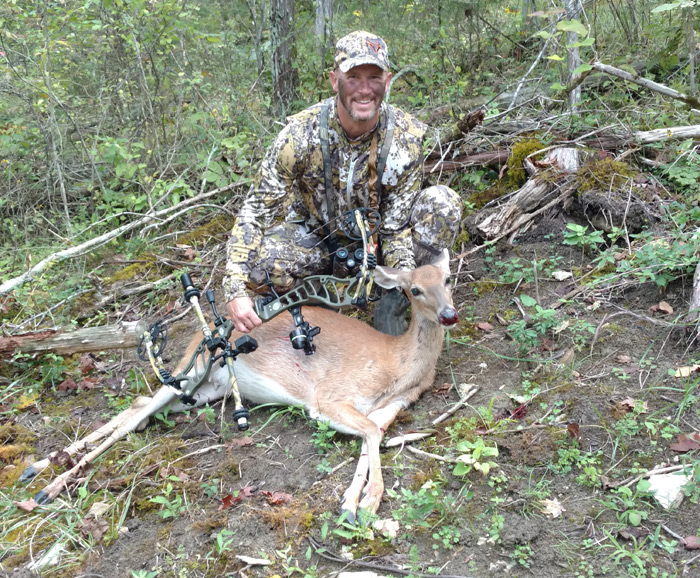 Together we packed up and headed out to find the old girl. It did not take long. She was a good size doe and the meat would be excellent. Danny took some pictures and then we pulled her to the trail. Danny went back to the lodge and got the side by side so we could get her back to the lodge. Back at the lodge we hung her up to be dressed and quartered. It was decided that we would have backstraps for dinner.

In Search of Kentucky Velvet: Part 3-B