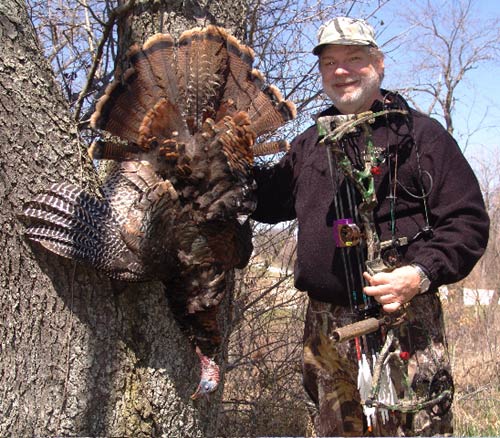 I left Billy Don’s hunt in Texas Friday morning and landed at O’Hare Field in Chicago late in the evening.

Saturday I washed my hunting clothes, packed my truck and left Sunday for west-central Illinois. I book and run turkey hunts with Bob and Rob McNeff, owners of Wells Creek Outfitters in Clayton, IL. Bob and Rob run one of Illinois’ premier whitetail deer hunts. They are one of Illinois’ original deer outfitters and have been running their camp since 1989. Their vast acreage of deer habitat is also prime turkey habitat.

I couldn’t wait for the 2008 Illinois turkey hunt this year. I drew a Brown county 5 day tag for the first of Illinois’ five spring turkey seasons. I will be joined by George Scharikow from Chicago. Bob is guiding George. That frees me up to hunt this week. I drew the same tag last year and here’s what happened.

The evening before the 2007 season I went to the farm I hunt and heard gobbles coming from the farms’ southernmost field. The next morning at 9:30 am I had a full struttin’ long beard walking around my hen decoy showing her his best mating dance. That is every turkey hunters dream. In reality it wasn’t a dream. He was there but I was asleep. Twenty-seven days on the road turkey hunting in 4 states had taken it’s toll.

I sat inside my blind on my folding seat. I don’t know how long my eyes were closed. I must have caused quite a commotion when I opened them and saw the full strutting tom 10 yards away. I grabbed at my bow. I reached for the camera on the tripod next to me. I was too sleepy-eyed to find the on-off switch. Where was my arrow? I didn’t get a shot at that bird. He darted to the field edge and disappeared in the woods faster than I could wipe the sleep from my eyes. The next few hours, wide eyed I watched more turkey activity. All of it was on the far east end of the field. 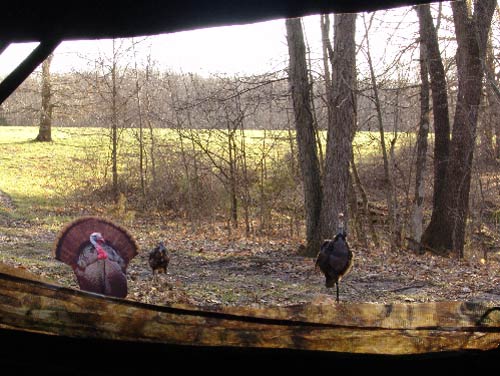 I hunted the same field three days straight. Each day I moved my blind and decoys farther east to the area of turkey activity of the previous day. I had lots of action but could not draw the gobblers close enough for a bow shot as they stuck to their hens.

I had to guide a hunter in another county the next two days. I wanted so bad to return to that Brown county field. I just knew in two more days of hunting I could bag one of those long beards.

Here it is 2008, first season. Tag in hand I headed for the south field’s far east edge. I sat opening day and listened to gobbles coming from the pasture area to the north. I stuck to my guns. I new I was in the right spot. Three days straight I watched birds here during the 2007 season. All year I waited for this day. I wanted to resume the hunt I cut short last year. But I saw no birds this morning.

Reality set in. As much as I wanted to kill a bird in that exact spot, things were different this year. I went to the pasture area that evening and listened as two gobblers sounded off minutes before dark. They were on the side of a hardwood ridge just above the creek separating an upper and lower pasture in the middle of the farm. I have deer hunted here and knew there was a logging road running just inside the woods between the pasture and the creek. I was there the next morning.

I put my blind up in the dark at the outside edge of a 90 degree bend in the logging road. I placed my decoys in the middle of the road. There they are visible for 100 yards in both directions to any turkey crossing the road.

As the eastern sky brightened I heard one of the two gobblers from the previous evening welcome the coming day. I made a few soft hen calls but the gobbler flew out of the roost and headed straight down to the lower pasture beyond the creek.

I sat until 9:30 am without hearing or seeing another bird. I decided to move at 10:00 to another area. Before moving, I tried a long, loud series of calls. I had nothing to loose. I was half way through my calling sequence, looking past the woods to the pasture, I saw a fan open. I got out my binoculars and focused on a full struttin’ long beard. There was not one but two long beards — heading my way. They ducked into the woods in front of me and I lost sight of them. I kept watching through the woods to the pasture edge. I saw red heads chasing each other, still in the pasture but closer to me. I called again. They hit the woods and came straight towards me. They were close, 50 yards when they came out of the woods and stood in the middle of the logging road. It wasn’t the long beards I saw earlier. It was three jakes. I called. They looked at my decoys. I called again and the farthest bird came straight down the road to my decoys. I drew when he was at 10 yards. He must have detected my movement. He did a one-eighty and was heading back to his two buddies. He stopped at 15 yards as his two buddies approached him. I shot and he dropped in his tracks.

I was shooting out of Double Bull’s new Dark Horse blind. I had the front open and the side open enough to shoot but the netting was pulled down. I didn’t have time to open the blades on the Grim Reaper broadhead I was shooting. I got a slight deflection and hit the bird high. Sometimes the hunting Gods are on our side. I broke the birds neck. He was dead where he dropped.
One of his buddies hung around and let me take his picture. I even got the video camera out and took some footage of him. I was so excited about the kill my hands were shaking. Isn’t that great! 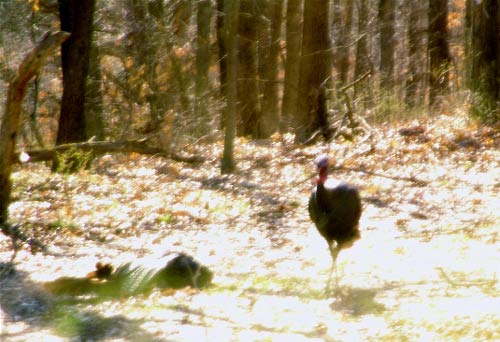 EQUIPMENT COMMENTS
On this leg of the hunt I got to try the new BowTech Octane two-piece bow quiver. It came with a lengthy instruction manual. I read it before I installed the quiver. It seemed like a complicated matter with diagrams and 11 steps. In reality it was 2 knobs that mounted to the riser of my new BowTech General. Two minutes later, full of arrows, I was shooting at the practice target. This quiver holds the arrows close to the bow and I immediately felt an improved balance. This well built quiver has magnets in the hood that hold the tips in place. What a nice feature. Arrow removal is flawless.
I moved my 20 yard pin slightly. I don’t know if my sight had been jarred from the truck/plane/bus/car/truck ride or if the change of balance from the new quiver caused a slight shooting difference. I am glad I shot before going to the field.

Straight Talk: Ted, Toby and the movie ‘Beer For My Horses’