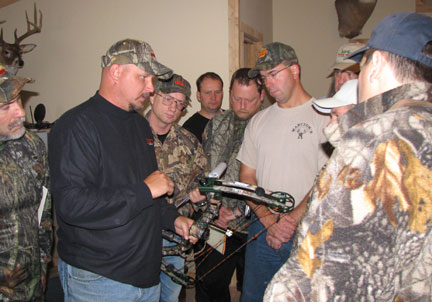 Quality is always deeper than meets the eye. People are that way too. Once in a while I meet someone who strikes me as deep. Most of these people are both personable and authentic. As a side trait most of these quality people make you part of their story. Often they leave a legacy behind. Think about someone who you look up to. They likely have some of these personality traits.

For some reason many of the special people in my life are hunters. One guy who invested in me and who exhibited these traits was an Athabascan Indian from Kenai Alaska by the name of Fred Mamaloff. We hunted Alaska Range moose and dodged Brown Bears while hunting Kodiak Sitka Blacktails together. We brushed against death on both the Yukon and the Kantishna. We shared a ton of campfires and more than one adventure that were both miserable and memorable sometimes life threatening. These are interesting people and they are the fodder for great campfire stories. Not everyone gets the privilege of having one of these unique people in their lives.  I was lucky to have spent time with a number of these folks along the trail I’ve followed.

Nearly 20 years ago I traveled from my home in Alaska’s Chugach Mountains to Tulsa Oklahoma to attend a convention. It was the Pope and Young convention and I was there with some notable bowhunting friends from Alaska to hear another Fred tell his stories. We were in a giant ball room with fancy chairs and linen. I had met the keynote speaker before, but tonight I was privileged to sit around his ‘final campfire’ and hear the stories of his life of adventure. Fred Bear was one of these quality people.

Fred was given the floor that night to share his message for 60 minutes. At least that is what the program at my place setting said. Fred got up behind the podium  and the ball room turned into a campfire that we all sat close around. Three hours later as the embers died, he closed with one final story. Fred’s eyes often stared past the crowd and into the spruce forest beyond the bowhunters sharing this evening with him. We heard Fred Bears best stories that evening. His eyes were alive with excitement as he took us with him on stalks along distant mountainsides and along great rivers. The best part of his stories was that he never made you feel like he was somebody special. The stories were about the adventures and miss-adventures, about bowhunting  and not about him.

He joked about tiger hunting in India from elephants and stalking brown bears on the beach at Wide Bay  he shared the details of hunts that had occurred 30 years before. Fred talked about both good and bad hunts where the weather and not the grizzlies were the real danger. He often spoke with more excitement about the misses and follies than his significant accomplishments. It was a real privilege to be part of his last campfire. Fred Bear passed away shortly after that last evening with friends.

I took my first whitetail with a hand-me-down Fred Bear Kodiak II recurve. I paid $15 for that bow. I bought it from my buddy’s brother who went by the name of “Chuck Roast”. I also purchased 3 cedar arrows with Bear Razorhead broadheads. That bow started me down the trail I’m still on  40 years later. The old Kodiak recurve now hangs along with two of those arrows in my office.

Today I shoot a Bear CODE bow. It’s a great shooter. The bow is a statement of quality. I’m told that some of today’s bows have over $100 worth of marketing mixed into their price tag added on to each bow price and some have close to a hundred dollars of patent royalties that they pay out on each bow. That just adds $200 to the price tag we pay! Correct me if I’m wrong but many popular bows are a “keep up with the Jones’s” mixed bag of every patent in the bowhunting industry. Fred Bear wasn’t a follower and nether is his company today.

My CODE is packed with engineering and design patents that are the exclusive property of Bear. You probably did not know that Bear Archery owns the patent to the popular single-cam system.  This ownership allows Bear to be more aggressive in design and use of this proven shooting system.  Only Mathews and Bear use single-cam technology without paying a royalty to some inventor.

While some bows are known for exploding limbs. Bear is known for their patented compression molded limb process technology.  Unlike other bow companies that have to buy their limbs from an out source, Bear designs, tests, and produces their limbs in house.

Bear limbs, be they quad, or solid are each compression molded to exacting tolerances to ensure top performance.  Unlike traditional “split” limbs, Bear Archery’s compression molded quad limbs are actually 4 compression molded limbs designed and tested to perform together in a quad limb configuration. Unlike all the other bow companies in the industry who outsource limbs from a few manufacturers, Bear limbs are made in-house.  Understand this, a normal split limb in the industry is really a solid limb that is sawed in half and ground to be “almost 2 similar halves”. Bear limbs, be they split or solid are each compression molded and designed to perform a certain function. Think of it this way, each is an identical clone of the specific limb design needed for top performance. There are top left and right limbs and bottom left and right. They are each designed to meet criteria that maximize the efficiency of that component.

Scott Alread, Bear product manager, commented that, “Today’s strategy at Bear Archery is to be the performance to value leader in each category we choose to compete.  Our sales increases and feed back from bowhunters this year tell us that this strategy is working, and that more and more bowhunters are finding out we provide the top performance to value statement in our entire line of bows.”

Value is a measurement of what you get for your money. And quality is a companion trait that is the result hard work by real people who believe in the products they make. Fred Bear first instilled these traits in his staff and today they are apparent in the team who crafts today’s Bear bows. The Bear name still carries those old fashioned traits. Bear has always led and they still do. Here, you get what you pay for. At Bear quality runs deep it always has.

Good people and good bows are both that way.

Sitka Gear in the Fall