Sitka Gear in the Fall

by Jason Balazs
in Bowhunting Gear
0 0
A A
0 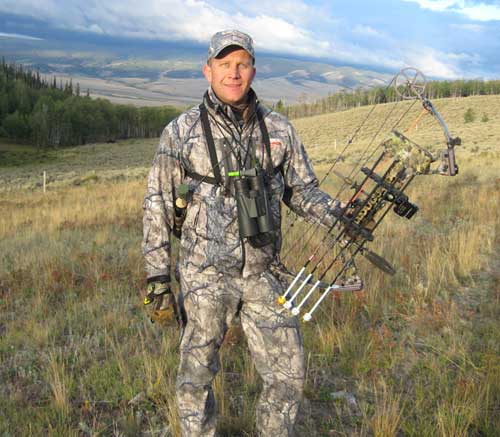 Folks, I have worn a lot of camo over the years. I am not talking about just a specific camouflage pattern, but gear in general.  As you know I have tested the stuff from ASAT as well as some Under Armor gear.. Jodi and I were getting ready for our annual elk hunt and I received an email from Rich Walton. He said I would be receiving some Sitka gear for evaluation for our upcoming elk hunt. I responded with something like, “Great, I can’t wait to try it!” Two days later the Fed-ex guy showed up and a box was delivered as promised.

In this box was a full outfit for hunting. Here is a list of equipment for me to put to the test. Core Crew shirt, Sitka Cap, Ascent pants, 90% Jacket, Celsius Vest, and shooters Gloves. I immediately took the gear out and put them in the washer to ensure that I washed them in scent free detergent that I had bought at the local Wally World.

However, as I was taking this stuff out, I noticed a huge difference between this gear and other gear that I have worn before. The make-up of it was different and all the pieces of outerwear were decked out with as many pockets as anyone would need. Since there were so many different things in the box, I will cover each one separately on what it is made up of and construction.

Everything in the Sitka line starts with a base layer. For those of you who have never hunted where it gets really cold, need to understand the importance of layering. Just think of a duck and how their feathers are layered. On the outer side you have hard water resistant feathers and the inner side has down that traps air to keep you warm. That is how Sitka’s concept is. The Core Crew shirt is the first thing that is against your skin. It is made from Ploertec Powerdry with Micro encapsulated pure silver for odor control. As we all know, the latest craze on the market is how silver reduces the human odor by killing it where it starts. That is why Sitka has ensured their products include silver in them. The Polertec Powerdry wicks moisture away from your skin and ensures you stay dry, which interns keeps you warm. There is a laminated Bicep pocket on this base layer shirt that allows you to put anything in it. On those real cold days, you can slip a hand warmer in there and keep your muscles warm.

This ball cap is made from Polyester stretch weave material and has a water repellent finish that is highly breathable. The hat is adjustable to fit almost anyone.

These pants are made from the same material as the ball cap is. The Polyester stretch weave material is water repellent that is brushed for a silent finish. They have numerous pockets to fit just about anything that you would need. The articulated knees allow the pants to move with you and not bunch up, plus the adjustable cuff-shock cord enables you to close the ends around your boots. Top this off with removable suspenders, and you have a great all around pair of pants.

Keeping with the layering system that Sitka has, the Celsius vest works as tremendous insulation or a stand-alone outerwear. It incorporated a high-loft, wind resistant fleece and four-way stretch panels that extend into the shoulder. The high collar keeps the wind and cold off of your neck and keeps your binoculars or range finder strap from irritating your skin. There is also an internal cinch system that keeps the garment snug against your waist and prevents the vest from riding up.

This Wind resistant Highly Breathable jacket is considered an outer layer to complete the overall layering system. The high neck has a draw cord that allows it to close and keep the heat in, as well as waist draw cords and cuff closures as well. There are numerous pockets, such as the breast pockets that are made high on the chest to allow you to store stuff even if you have a pack on or treestand. The armpits have something called “PitZips” that open up and let fresh air into your armpit area. This is great for not sweating to much on the long hikes to where you might set up stand or sit for a while. Once you cool down and stop sweating, all you have to do is zip them back up to keep the body heat in. There are two pockets for your hands to stay in, which hold the zip cords for tightening the waist. No more dangling cords to get caught on anything, plus they are right at the tip of your fingers. During my elk hunt, I kept my range finder in one of these pockets and had no trouble with it falling out or anything. The pockets really conform to your body.

The shooter glove is really cool. It is just enough material to cover your skin, yet allow you to feel the slightest pressure on your release.  It has a mesh backing that allows doe quick drying yet the areas where you need protection and re-enforcement are built up correctly.

The first morning I was out hunting, I had to get used to all the pockets that the Sitka camo had to offer. We all know how it is the first morning anyway. We are always missing something or just getting used to being out in the great outdoors again when the season first starts.  There was no forgetting anything our first day though. The 90% jacket has two pockets on each breast that enabled me to keep my range finders handy as well as all my elk calls right at my fingertips as needed. During our elk this year we experience all kinds of weather. From days in the 80’s to mornings in the teens and sunshine to downpours, we experienced it all. The Sitka gear proved itself as being water repellent for sure. I wore everything the first morning since the temperature was around 25 degree’s. Since I was not sent the base layer for my legs, I used some Polly-pro long underwear that I have had from the Military. I did get a little chilled when I was just sitting there with the shirt, Celsius vest, and 90% jacket just on, but I fixed that with a Polly-pro top the next morning underneath everything. During the day, the layering system worked wonderful. I was able to strip layers when I was to hot or increase layers when the temperature dipped down with the sun.

I also hunted Antelope during the two weeks that we were up hunting elk. I spent a lot of time crawling and sneaking up on antelope to get a shot. If you have never bow hunted antelope, let me tell you it is very hard. I spent more time walking and crawling to get close than I have on anything in my life. Believe me, the Sitka gear was right with me the whole way as well. From bushes to cactus, these clothes were tested very hard. The only problem that I had was one of the knee’s started to wear thin and began getting a little hole from sneaking up on antelope so many times. That is one thing I would recommend is they re-enforce the knees on the next batch of pants that they make.

I also washed my Sitka gear in the filed in some large tubs that we had brought because we had a free flowing spring right next to camp. The water was ice cold, but the scent destroying soap I had bought from the store worked fine with the gear. After washing it and hanging it to dry in the sun around camp, the gear dried quickly. I was able to wear it that evening for the elk hunt as well.

Overall I am very impressed with the Sitka gear that I received. The quality that has gone into making this gear is seen first hand. I give everything a 10 on the scoring scale except for the pants. I give them a 9 just because of the knees. Once they have re-enforced knees they will have a 10 from me. It is good to see a company that has come out with some quality gear that is made for a serious hunter. Granted, it might be a little expensive, but the money that you save from not re-purchasing all that gear that is made on cotton or cheap material will be worth it. You can tell that when you look at Sitka gear, you are looking at quality. The Camouflage pattern that I was sent was Mothwing Mountain Mimicry and blended in with sage, Aspen, and dark timber. It has to be one of the best camo patterns that I have ever seen and it is no wonder why the folks at Sitka won the 2008 Field and Stream Best of the Best award!

For more go to: Sitka Gear