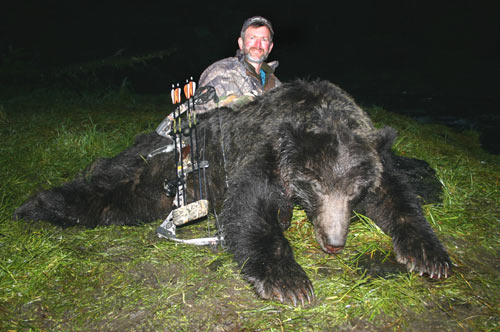 It may still be blizzarding in much of America, but before you know it spring will have sprung and it will be time to be out bowhunting black bears. And while I dearly love to turkey hunt, for me spring has always been a time to seek out bears. Mostly that means black bears, though I have done a lot of grizzly and brown bear hunting, too.

I shot my first black bear in the early 1980’s in Oregon, back when the state allowed you to pursue them with hounds. The fact that I went into the hunt thinking it would be a piece of cake (Dogs treeing bears? How tough can it be?!) and found out just how physically demanding and challenging it really is helped set the hook. When I lived and guided in Alaska I was hard after bears both spring and fall, hunting them with rifles, bows, muzzleloaders and, upon occasion, a handgun. Every bear hunt has been unique and special in its own way.

Like the wild turkey, the North American black bear population has exploded in recent years, too. The U.S. bear population more than doubled between 1989 and 2006, rising from 165,000 to over 350,000, according to The International Association of Bear Research and Management, a bear conservation nonprofit that takes a periodic census of the animals. Numbers are equally high across Canada. It might be said that the golden age of black hunting is right now.

That means that are lots of good places to bowhunt black bears. By the same token, as many of you know, black bear hunting is a game where when it is right, it’s awesome, but when it is wrong, you are hosed. When researching potential outfitters you need to factor in many things, including their track record as bow bear guides, local bear population, local hunting pressure, and so on.

I have bear hunted across the continent, and there are many options. I hunted in Quebec last spring for the first time, and liked it so much I’ll be going back this year. The hunt was set up through Armando Vendittozzi of Armando’s Outdoor Expeditions.  Armando, a Montreal native, has guided fishing in the Far North for walleye, lake trout, char, and pike, as well as waterfowl hunters in eastern Quebec and Ontario. He currently represents outfitters worldwide that offer to a wide spectrum of hunts, from the working man to top-end, exclusive adventures. But it was the “working man” aspect of this Quebec bear hunt that grabbed my attention. The lodge he brought me to, Domaine Shannon, Inc., is one he has been personally been hunting and fishing at for the past 15 years. It proved everything he said it would be – excellent cabins, great food, a friendly, competent staff, skilled guides, and outstanding hunting at a great price.

The lodge – a family owned and operated business for the past 40 years — boasts a bear hunting track record that’s hard to beat. “In 2008, we had 38 hunters and they took 32 bears,” said co-owner Serge Danis. “All but one of our hunters had a shot at a mature bear.” The man who did not get a shot? “We have a guarantee at the lodge that says if you do not have an opportunity at a mature bear during your week’s hunt, you can come back next year on us. All you pay is your transportation and the cost of the license.” All told, the lodge has almost 600 square miles of prime bear habitat to hunt. In addition, the fishing for walleye and northern pike is about as good as it gets, something I experienced first-hand while I was in camp.

All hunting is done over baits which are serviced daily by guides that are, to be blunt about it, local guys that are both highly experienced bear hunters and skilled woodsmen. You can hunt with firearm or bow, as Serge has several bow stands ready and waiting for archers when they arrive and enclosed shooting houses for the gun hunters.

One of the other big attractants for me on this hunt is the fishing. The lodge sits on a big lake that is full of walleyes and northern pike, and early spring is when the fishing heats up. They have boats available and can dial you in. Armando, co-owner Sylvain Danis – this guy can really fish, mind you – and I fished mornings and hunted evenings. We slugged the fish, I shot a dandy bear, and it was grand At $1900 plus tags for a trip that includes comfortable cabins, all the guiding, and trophy preparation, it’s a dang good deal.

You can find similar experiences across Canada and Alaska, too. And, of course, there are excellent spring black bear hunting operations in many lower 48 U.S. states, too, though because baiting is banned in many of them it makes it a bit tougher for the average bowhunter to get a shot.

Now, do not get me wrong. I will be out chasing gobblers this spring, too. But a spring without a black bear hunt? I am not sure I can let that happen. You bear hunting fanatics out there know exactly what I mean.