The Bobcat and the Gobbler – Big Gobbler Down 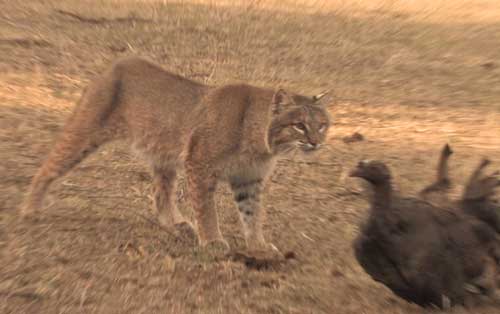 I had been looking forward to this turkey hunt for some time. It was a long winter and felt good to get out scouting for long-beards. I had some birds nailed down. I set trail cameras and put the blind out a few days ahead of the hunt. A buddy was scheduled to hunt with me and I was more interested in getting him a bird or two. Funny how we are never really in control of anything that we think we are!

Author prepares the Rack Pack, the all purpose folding, pack your stuff in, comfortable, sit a long time, chair.

As the good Lord would have it, my buddy’s plans fell through and I came down with an extreme cough and ear/sinus infection! I was physically sick enough that I told my wife I didn’t care if I ever shot another turkey if that’s what it took to get well! That’s pretty sick for me! After a day of antibiotics, and feeling a little better I couldn’t take it anymore, I knew the birds were there and the blind was already set. All I had to do was drag myself up the hill and sit there. That was one of the bright sports as I would be sitting comfortably in my Rack Pack waiting for my turkey to come in for a shot.

Upon checking the trail camera, the birds were right on schedule the day before! I had a prime opportunity going, and just needed to be patient.

A lone hen appeared out of nowhere, seeming to befriend my decoy. After watching her for a while I lost interest. Suddenly, I was startled, a bobcat lunged at the live hen, which easily jumped out of the way. The confused cat crept up to my decoy, soon realizing it was a fake.

This bobcat is no fool as he zeros in on the blind, then turns and moves off.

The cat took a look at the blind tucked its tail and slowly walked back into the cedar trees. That was the first bobcat I had seen turkey hunting and it made the trip. I didn’t care if I saw another turkey after that experience. I was turkey hunting, but didn’t really care if I shot a turkey today! I’m telling you God has a way of showing you that what you think is really important, really isn’t!

About 30-45 minutes after the bobcat incident, a large group of hens began feeding through the meadow. There was a long-beard in tow! I was hoping he would single out my decoy and lock on for a steady head shot with the Bullhead! He came so close to locking onto her, but all the other hens walking around kept him moving, the whole group worked off and I did not shoot. I wasn’t concerned, this was the spot, and somebody would be back!

Maybe another 45 minutes went by, what looked to be the same flock was making their way back up the hill through the meadow. It was a group of about 15 hens with one gobbler, but they were not in a big hurry. The gobbler wasn’t planning a stop near my decoy. It’s now or never. I estimated he was 25-30 yards out. I have not shot a gobbler past 10 yards with a Bullhead (and I have been fortunate to shoot quite a few turkeys with this head); this would be a good test. I came to full draw. The gobbler paused in half stride. I fit his head tightly between my 20 and 30-yard pin and squeezed the trigger.

Direct hit. The Bullhead is one lethal turkey killer.

The arrow floated toward him and looked good… (Insert the sound of a machete slicing a watermelon) …the tom crumbled! I was pumped! …Just made a sweet shot on a nice gobbler! It was a great hunt; the cat was out of the bag and a big gobbler down!

The Magnus Bullhead did it’s job. Gobbler down and out.

Mule Deer - They’re Not That Dumb