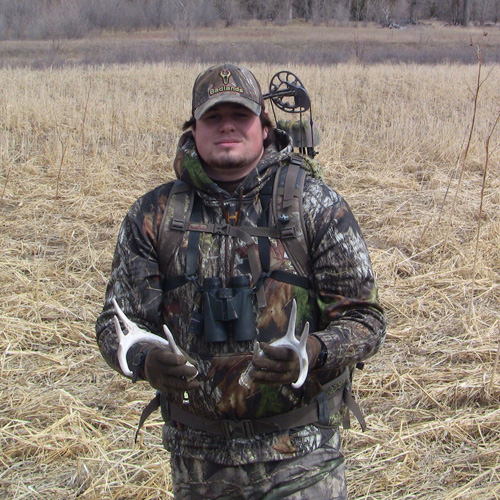 My buddy Shane Rickert and I met up after he got off work on Saturday night (4/10) and we were headed off to Central Montana near Rygate to give the turkeys a try for a few days. We made the 3 hr drive east and got to his uncles ranch pretty late. We put a quick plan of attack together for the morning and we were off to bed.

The morning came quick and we headed to the river bottom where we would setup the ground blind. I had the video camera in hand and I let Shane have the first chance at a turkey.

I gave a few yelps on my Primos mouth call and we were off to the races. We heard a gobble off in the distance but it didn’t sound too far. So we waited patiently. Five minutes later I yelped a few more times and there was more gobbles. The turkey was getting closer. Shane got ready.

We heard a hen start clucking and the gobbler immediately shut up. That was the last we would hear from him. The beautiful Merriam’s hen did come in to our Montana Decoy setup though and danced in front of the camera at 30 yards for a little bit.

We saw a coyote and a nice group of deer on the ridge that morning but otherwise nothing else. We went back to the house for breakfast.

At about 12:30 we decided to head out and do some scouting and shed hunt. We ended up walking along the river and I found a set of sheds and we also found a couple nice deer rubs. We then decided to take a quick nap and get ready for the evening sit.

That evening we didn’t hear a peep. Nothing. Didn’t even see where the turkey’s would roost. We left the blind up and figured we would give it another shot in the morning. It would be my turn.