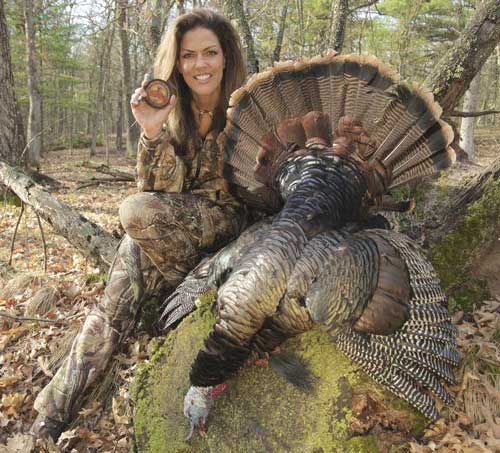 Only a seasoned turkey hunter can understand the highs and lows that can come with hunting the finicky, yet sometimes predictable,  thunder chicken.  Some seasons are over before the sun creeps above the trees on opening morning and others are spent running and gunning to no avail.  My 2009 Wisconsin spring turkey season was that of the later. Using my rubber hen and jake decoys, I sat for three solid days on the ground with my 12 gauge and calls in hand.   Shaking with excitement, I could tell the resounding gobbles were getting closer by the minute.  Finally, splashes of bright blue would appear through the brush, sometimes magically materializing out of nowhere.  On numerous occasions I watched the strutting toms cautiously hang up outside of range.  With the click of my safety going off on three separate sits, my Wisconsin season still ended with a score of Toms…. 3 and Jana… 0.

A few weeks prior, I had the pleasure of bowhunting turkeys at an outfitter’s in Nebraska.   I watched numerous hens, jakes and toms approach the outfitter’s life-like hen decoy before I was lucky enough to put an arrow through a huge 4 year old tom at ten yards.  The bird population in Nebraska was astounding and after having a taste of success, I couldn’t wait to head back to the Wisconsin Dells for another adrenaline pounding hunt.  Little did I know the challenge that lay ahead.

With the 2010 turkey season fast approaching, I was determined to even the score.  While attending the Wisconsin Deer & Turkey Expo I came across a product that I wanted for my arsenal…  The “A-Way Turkey Skinz”.  It’s a wrap that goes around your rubber or plastic decoy, made of real turkey feathers sewn into weather proof fabric.  Simply put, A-Way Turkey Skinz adds a new level of realism to your already existing decoy.  The beauty of the Turkey Skinz is not only visual… but friendly on the pocketbook.  Life-like decoy are expensive, often priced over $500 but the A-Way Turkey Skinz in 1/10th that price!  Recalling my close encounters last season, I decided my decoy needed a make over and perhaps the ‘real’ look could help seal the deal.

Placing my new and improved hen decoy out, I leaned back against the pine tree on opening morning.  Sitting in the dark, my anticipation grew as I could hear the echoing gobbles from the nearby roost.  As daylight broke, a group of hens along with two huge longbeards came parading through the brush.  Just out of range, they swaggered through on their way to another strut zone.   Most turkey hunters know, it’s almost impossible to pull a tom away from his harem no matter how enticing your decoy appears.

I would have two other encounters of this kind until the winds of luck changed on the second day of the hunt.  Sitting in a hand made blind just off their evening strut zone,  I could literally hear my heart pound as two bachelor longbeards appeared out of the woods heading in my direction.  When the closest bird stepped into range, I put the hammer down and dropped him in his tracks at 45 yards.  Thanks to heavy shot load,  my new A-Way Turkey Skinz and a little patience, my 2010 Wisconsin season ended with another fanned out tail on my wall and memories that will last a lifetime.