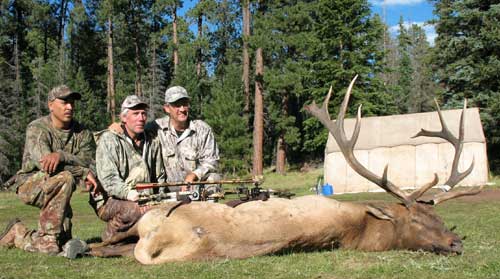 How many hunting magazine articles have you read that begin something like this: “It all started when I learned I had finally drawn that tag of a lifetime!?” The author then goes on to tell you about the giant bull elk or muley buck or bighorn ram he killed and how thankful he was to the stars above for the opportunity.

To maximize your chances of success after drawing a limited-entry Western tag you need to do lots of research and planning, then be ready to work hard, even after hiring a great outfitter.

Such articles are highly misleading. They make the average Joe think all they have to do to replicate this success is to apply in several states for a few years, and then, when they draw that coveted tag, just show up and a giant buck or bull or ram will easily be plucked from the fold, like picking blueberries in a year of good rain.

I learned this the hard way myself. In 2008 I had 10 points in Utah for archery elk, and finally drew a highly-coveted tag that cost me more than $800. I even had some semi-guided help from a local outfitter chosen through the tag application service through which I drew my tag. And yet, after 12 days of dawn-to-dark hunting, I left totally disgusted. I never saw or heard a big bull. There were hunters everywhere, too. Not all had trophy bull tags; some had cow elk tags, some had mule deer tags. All the trophy bull hunters I met – and there were plenty of them – had at least two buddies in tow, and they all tromped through the woods stinking it up, blowing calls like a high school marching band, and generally terrifying any critters. Dream hunt? It was more like a nightmare.

Such tales are far more common than those of taking a true trophy animal these days. So for advice on what you should do moving forward when trying to draw one of these limited-entry tags, I turned to a true expert, Gary “Goose” Howell of Flagstaff, Arizona (www.howellwildlifeoutfitters.com; 928-606-3021.)

Gary’s experience includes more than 20 years of everything from organizing large multi-hunter tent camps with numerous guides and cooks to just himself and one hunter in a trailer, guiding both archers and gun hunters. He is so good he has been selected by many well-healed hunters who have purchased governor’s tags in Arizona and elsewhere to be their personal guide. Goose has been at it for a long time and has seen the game change, as I have. He’s adapted what he and his clients do and remains highly successful. Here’s what he has to say.

“Because it has become increasingly difficult to draw a top-quality, high-demand hunting permit on public land it is imperative to implement a plan and conduct your due diligence if you hope to be successful,” Howell said. “You must do all of the research and do your own pre-scouting or hire a qualified, experienced guide/outfitter to do the work for you. This is critical! Failure to do either or both of these things will lead you to certain failure and disappointment.

“Even if you opt to hire an outfitter, you must make sure they both know and have successfully hunted that specific hunting unit, what class of trophies have they previously harvested for their clients in that unit, and thus what you should expect an opportunity to harvest, given your goals, weapon proficiency and physical condition,” Howell said. “It is also imperative that the outfitter and his guide(s) are available to pre-scout everything and do everything for you, so you may make the most of your hunting opportunity. The importance of this cannot be overemphasized! Ask if you can meet and/or speak with your guide, so you can get a feel for him and make sure he knows what you want and desire out of your hunt.” (And yes, a reputable outfitter will gladly supply you with his qualified guide’s name and phone numbers, if you are truly interested in their hunts.)

You should also realize that today, all the western states provide top-quality, high-demand, limited-entry permits, with more competition as well as hunts and hunt permits for the general public to participate in. “Thus, it is even more difficult to not only draw such a quality permit but to actually harvest the trophy class animal of your dreams on that hunt,” Howell said. “It is highly competitive out there”.

Here’s an example. “Arizona has some of the best quality bull elk in the West, but the state keeps offering more hunting opportunities (seasons) so that more sportsmen can participate and actually hunt elk,” Howell said. “Thus, in many areas Arizona elk are actually being continually hunted from mid-September through the first week of December. In other words you may have a great elk tag in a great elk unit, but you may be the fourth and or even fifth elk hunt in that particular unit, which makes it very difficult to expect to harvest a true trophy-quality bull elk after all of the previous continuous hunting pressure. I mean, each previous hunt has been full of hunters and their buddies out there beating the bushes, making top-end bulls very hard to come by, so if you have one of these tags you better know what you are up against and be able to adjust accordingly. Even the experienced local hunter must put his time in to even expect to have a reasonable opportunity to see and/or harvest a trophy-class animal. For the nonresident tag holder it will be doubly difficult.

“Also, never forget that public land hunts require that you be dedicated to be in the best physical condition possible, be mentally tough, and plan to stick with your goal to harvest the best trophy possible, win, lose or draw,” Howell continued. “You must be qualified and proficient with your hunting weapon, and take off the time necessary to get the most out of your top-quality, high-demand hunt! Just because you drew a great permit does not mean it will be a cake walk to harvest a big trophy. To maximize your chances requires dedication, time, and a quality hunt game plan.”

A good example of this occurred when I lived in Alaska. I applied for the Dall sheep drawing in Chugach State Park near Anchorage, where many nonresidents and their guides also apply. Instead of choosing the units where these guys like to apply, I chose a lesser-known unit with better draw odds. The third year I applied I drew. I did some heavy pre-hunt research, made lots of calls to other hunters who had drawn the same tag in previous years, spoke to the Alaska game biologist in charge of the unit, got topographic maps, and made three long weekend backpack scouting trips into the area. I developed a solid game plan, then hiked into the area the day before the season opened. On opening morning I shot a beautiful full-curl ram that scored 160 B&C points. It wasn’t one of the 170-plus rams the guide boys chased – and never got, mind you – but I had a super hunt and never saw another soul.

Limited-entry, high-demand public land hunting tags are the way of the future in the West. Serious nonresident hunters stay abreast of the changing nature of these tags and are learning to make the system work for, not against, them. The one thing you can be assured of is that the days of waltzing unprepared into National Forest or BLM lands out West and shooting a whopper buck or bull are over. If that does happen to you, immediately rush out and buy a lottery ticket. You are destined to be easy rich!

Take the Hunt to the Turkeys

“The Fan” for Big Gobblers