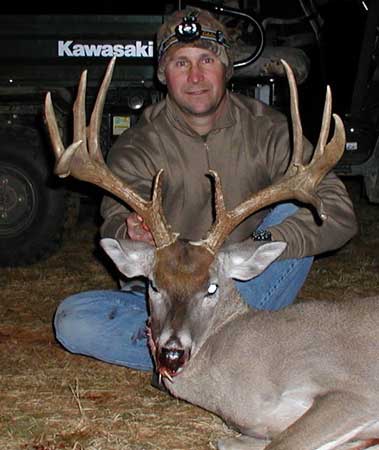 Sometimes the best things happen when you least expect it. This was the case for my largest buck to date which I was fortunate to harvest during the 2009 hunting season. My hunting partners and I have been managing our hunting land for the last five or six years and the results are speaking for themselves.

We hunt on relatively small acreage low fence land in north central Texas. Our strategy is that of continual improvement to our habitat; let our bucks get to an age where their natural genetics can express themselves, keep our deer herd at a good buck to doe ratio and maintain proper animal numbers for our habitat.

Letting your bucks come of age, is often times easier to talk about than actually put into practice, when you are hunting low fence properties. We all hear the excuses: “if I don’t shoot it my neighbor will”, “if I don’t shoot it, I will never see it again” or any of a half dozen other excuses I hear on a regular basis. I am here to tell you that if you make some sacrifices, you will be rewarded as I was during the 2009 hunting season.

Each year for the last several years, I have seen bigger bucks than I have seen in prior years. Bucks typically will not sport their best set of antlers until they are 6.5 years old. Holding out for a 6.5 year old buck on a low fence property can be really tough, so we set our goal at 4.5 years of age or older. My personal goal is to shoot bucks that have considerable tooth wear, or smooth teeth, which starts to show at 5.5 years of age and really is evident at 6.5 years and older.

I set this goal, because when you are shooting 3.5 and 4.5 year old bucks, it can be a bit tough to interpret for sure how old the bucks are, but when they have teeth worn down to smooth, you know for sure they are a mature buck. I figure the challenge of the hunt is 40 percent of the fun, with another 40 percent ranking going to, getting away from the hectic pace of city life and enjoying nature and 10 percent on actually shooting the game. On our ranch we could shoot a deer almost every time out, but shooting a 4.5 year old or older buck is a challenge. Add a 4.5 year or older buck with great antlers and you have something that will keep you awake at nights, re-thinking set-ups, monitoring the weather, learning more about weary old buck movement patterns and looking forward to every minute you can sneak away for another hunt. I am a big believer in “to each his own” and “the trophy is in the eyes of the beholder”, but when you have been hunting whitetails for thirty six years like I have, with as many racks as I have in my house, the continuous challenge of the hunt is what keeps me inspired and craving each and every hunting season.

This particular hunt was in late December during the 2009 hunting season. It was a mild afternoon and I had been hunting hard for a couple of months now. I have a very understanding wife that lets me head to the ranch just about every weekend, so I had quite a few hunts under my belt already. This particular afternoon, I was accompanied by my son and daughter and her fiancé. We were running late, so I decided to devote my attention to getting the kids in their stands and really wasn’t thinking much about my hunt at all. I dropped my son off at his stand location and then went to the next closest set-up for two people and dropped my daughter and her fiancé off. I decided as late as it was, to hunt the next available stand. The feeder had already gone off prior to me even getting to my tripod.

There was only about an hour until dark so I settled in to enjoy the time in the woods and looking forward to spending the weekend with my kids. I thought that maybe if I was lucking, I would get a shot at a hog just before dark. There really was not a lot of wildlife movement that particular evening. Just before sunset however, I caught some movement about 700 yards away along the creek bottom to my right. I had made it a practice to tote my camcorder on quite a few hunts this year and was fortunate to have it with me this particular hunt. I had been getting some pretty cool clips of coyotes, turkeys fighting, hogs fighting and some pretty good bucks on tape. I pulled the video camera out of my backpack and started photographing. I could see the movement was a buck and appeared to be a pretty good buck, but I was only getting glimpses of him as he passed through an oak thicket along the creek bottom and then up through a mesquite flat.  As he worked his way closer in my direction, I realized he was a mature buck that I had seen on a game camera photo during the summer. I had estimated his age at 4.5 to 5.5 years old, and thought he would score in the 160 range. He had tall antlers with great mass and some knot holes and kickers on both antlers.

I got some pretty good footage of this buck before I realized I was not really prepared for the shot. I fumbled around a little on the tripod while setting the camera down and getting ready to take a shot. I was fortunate the racket did not spook this magnificent buck. He was well within range by the time I was ready to shoot. A single shot to his vitals brought him down after just a short run. I could see the buck go down, so I knew I did not have to wait long to go get him.

As I approached the buck, I was excited to see he had fourteen scorable points and had a very unique looking rack. He really was an impressive deer. I was pumped to say the least. I walked back to my daughters stand and then to get our Kawasaki Mule to go load the buck. My daughter, her fiancé and I loaded the buck and drove it out to pick up my boy. We teased him a little saying my daughter had shot the buck (since it was her first hunt of the year), but finally gave in and told him I had shot the buck. My boy had the reigning high scoring buck up to that point with at 154 B&C buck he had shot 10 years earlier. We rough scored the buck at camp and feel he will end up in the mid 160 range. After recording his weight, antler data and field dressing the animal, we headed to my local taxidermist and then to town for a celebration dinner.

It was a very unsuspecting time to lock in and harvest the largest buck I have ever shot. I was fortunate that 2 of my kids were there to enjoy this great experience with me. I look forward to spending more time with my family in the great outdoors, chasing weary old bucks and witnessing wildlife in their natural and free ranging environment.

Let bucks walk until they are old enough to show their true genetic potential and you will have challenging and rewarding experiences afield year after year. Take your kids hunting and you will be blessed with great experiences for generations.