Hogs In My Food Plot 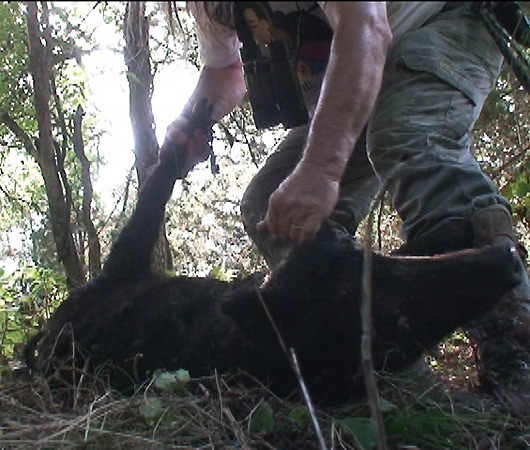 Early July 24 as I checked my BuckEye Cam wireless pics from the main food plot. Something was there that I was not happy to see, eyes glaring in the dark from dark shapes of different sizes … wild hogs.

The food plot was doing great, nice and green, but when I went to look an area was rooted up right down to the dirt. Here is the first picture of the hogs, it’s late at night and as far as I know this is the first time they’ve been to my 2010 food plot.

They are at the far edge of the food plot and it looks like they are checking the area out.
The next picture shows three of them. They are up in the nice green stuff. If they come very much it won’t stay nice and green, it will turn to not nice and dirt.

To bring things into perspective here is a pic with two spotted hogs, a young one and a much larger adult.

This wild hog intrusion had me worried. Deer were starting to come to my food plot and besides digging up the plot regular visits from wild hogs would run the deer off too.

Yesterday afternoon I got my stuff together to go hunt some wild hogs. The last thing I did before I got in my truck was to glass my food nearby plot. Black objects were in it. About 10. Three adults. The rest were 20 ponder sized.

I have things rigged to I can sneak over close to the food plot — if I’m lucky enough not to be spotted or smelled. I took my time and kept trees and stuff between us. A black boar darted around and then walked off into the high grass surrounding the plot. The rest followed.

But that played right into my plan, I kept a tree between us and moved when their heads were down and behind the grass. When things were just about right took a quick picture of a couple of them.

Obviously I had a good shot angle so I un-Sonyed and BowTeched up … and drew. The boar acted up again and hurried around, bothering the rest of the hog group. Before long I had to because nothing was broadside long enough for a shot.
I drew 3 more times but had to let down twice. Before the last draw the boar herded the biggest hogs, a spotted one and two black ones, toward where I was hidding. I drew and waited to see if it would work this time.

A black one postured to stop the boar and stopped broadside and in range. My bright green top pin shown bright on its’ black body and I put it where it should go and released the arrow.

The hit was in the ribs but not tight to the shoulder. The hog trotted away and the others followed. They all stopped about 40 yards away and looked back in my direction. I stayed down.

Surprise, they all came back, even the one I had shot. I got out another arrow.

The hit hog turned and moved away at a steady pace. All the rest followed. They went behind a clump of trees and brush and then turned and walked from my right to left along the woods edge. There was only one adult black hog.

When they were gone I got my neighbor Perry Wicker to help recover the hog. My arrow was on the ground where I took the shot. Not much blood on it but it was end to end with clear stuff that did not smell bad, fat.

When we got to where I’d seen the hog last it got up and walked slowly into the trees. l advanced 20 yards in the thick woods and Perry said he saw the hog again, up ahead of me in the brush.

We pulled out. The best choice at this point. I’d go look for it tomorrow morning.