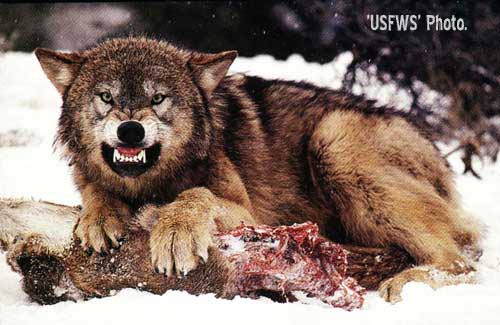 Candice Berner, a 32-year-old special education teacher, was attacked and killed by wolves March 8, while she was jogging on a remote road about a mile outside Chignik Lake, Alaska.

Snowmobilers discovered the body, and state troopers investigating the scene found the prints of what appeared to be at least two wolves.

From the sign, it appeared the attack was predatory in nature, and an autopsy later confirmed that injuries inflicted by the animals caused the woman?s death. Berner, originally from Slippery Rock, Pennsylvania, moved last August to Chignik Lake, an Alaska Peninsula community of 105 residents 474 miles southwest of Anchorage.

During the initial investigation, no more fresh wolf tracks were found in the area. However, residents reported seeing wolves and began patrolling for the predators. A week later, state agents shot a pair of wolves that matched the description of the wolves seen where Berner was killed. No other wolf tracks or sign were found in the area, despite relatively good search conditions and the efforts of an experienced crew.

Preliminary tests indicated the animals did not have rabies. Forensic examination will determine if they can be positively linked to Berner’s death.

Hunters took 188 wolves during Idaho’s first wolf season, which opened last September and ran through the end of March. Population control was the main goal of the hunt, and according to figures compiled by the state, 2009 was the first year since the reintroduction of wolves in the mid 1990s that the population in Idaho did not increase.

“The season has succeeded in halting the growth of Idaho’s wolf population” Idaho Fish and Game Director Cal Groen was quoted in a release. “It showed that Fish and Game is capable of monitoring and managing a well-regulated wolf hunt.”

In all, the state sold 31,400 wolf tags to residents and nonresidents alike.
Most of the wolves were shot in October, and the fewest in January. The statewide limit was 220, and hunting ended early in seven zones as local quotas were reached. The wolves ranged in size from 54 to 127 pounds; males averaged 100 pounds and females 79.

Montana also held its first wolf hunt last season, and 72 were taken between September 15 and November 16. Montana closed its hunt two weeks early to ensure the statewide quota of 75 wolves would not be exceeded.

The state estimates its wolf population grew 4 percent last year, as opposed to 18 percent the year before the hunt, and officials may propose a higher quota next season. “The combination of a conservative harvest by hunters, agency control and other mortality sources did not curtail population growth” a release quoted Montana Fish, Wildlife & Parks Director Joe Maurier.

When wolf reintroduction began, the goal for the northern Rocky Mountain Region was 30 breeding pairs and 300 individual wolves, for at least three consecutive years, well distributed throughout the region. That goal was surpassed in 2002, and the wolf population has increased every year since.
Today, more than 1,700 wolves inhabit the region, where they travel freely across state lines.

For more go to: Fur-Fish-Game