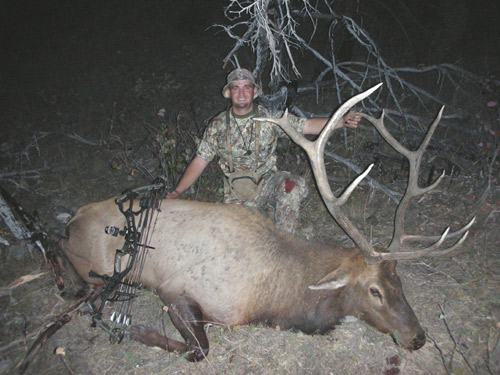 The third week of September is definitely one of my favorite weeks of the year.   Cool crisp mornings, mild fall days, and clear starlit nights.  Fall is finally here!  The leaves are changing, creating breath taking views in the high country.  Best of all, the elk hunt is on and the silence of the cool crisp mornings is shattered by screaming bulls full of testosterone looking for a fight!   Just thinking about it gets me excited.  God willing, you will find me in the woods, bow in hand, chasing one of the most amazing animals on earth.

This past September 19th found me right were I wanted to be; hunting elk in the pristine Mountains of Montana.   I was joined by a couple good friends, my trusty Hoyt in hand, flowers were on the way to my better half for her birthday to keep me out of the dog house.  Life was good.  The only problem was, mother nature had forgotten that it is was fall.   Record highs made it feel much more like the middle of July.    After the first mornings hunt it looked like we were in for a long, hot, tough week of elk hunting.

After a long hot day, I decided to still hunt up a pine draw and set up where two canyons came together.  My hopes were still high.  There was still a full week to hunt and I know from past experience that things can happen in an instant!  As I quietly walked up a well used trail, a large set of fresh bear tracks got my full attention.  I instantly nocked an arrow and went on full alert.  I left the trail and climbed up the steep slope of the canyon to gain elevation and get a better vantage point.  I wasn’t to keen on the idea of a face to face encounter in the thick bottom with a large black bear.   Just as I settled in between a couple trees to listen and glass up the canyon, loud crashing behind me made my heart jump.

Arrow still nocked, I slowly turned.  Expecting to see something running the other way, I was surprised to see a herd of cow and calf elk coming right at me closing the distance fast.  The next few minutes were a rush of adrenalin and excitement that I won’t forget, the kind of adrenalin rush that motivates me and drives me to the woods each fall.  It is an addiction stronger then any drug out there.   Elk were scrambling all around me, some below, some above and some a little too close for comfort.

My heart pounded even harder as the last thing I saw coming through the trees was a nice 6 point rack.  The bull was hot on the trail of the last cow which was now conveniently acting as a live decoy basically stopped on top of me at one yard.   As the bull dipped into a small draw out of sight I drew my bow.  Apparently the cow wasn’t too excited about me drawing my bow between her legs as her hoof barely missed my head by inches!  As the bull came out of the draw, he was already up close and personal at 12 steps.  The bull instantly sensed something wrong as his cow was now in high gear heading up the canyon.   I quickly picked my spot, settled my top pin and touched the trigger on my release.  Whack!  At point blank my arrow disappeared into the big bulls chest.  Within seconds it was over.  The Grim Reaper Razortip had done its job and the bull was down within 40 yards.  All I can say is wow!  I love bow hunting elk!

It is experiences like these that remind me why there is no place I would rather be the third week of September even if conditions aren’t ideal.    The opportunity to be up close and personal and witness the sights and sounds of these magnificent animals is something that most will never have the privilege to experience.  It is a memory I will cherish and day dream about till next September when you can bet I will be somewhere in the woods hoping I’m lucky enough to be in the right place at the right time!