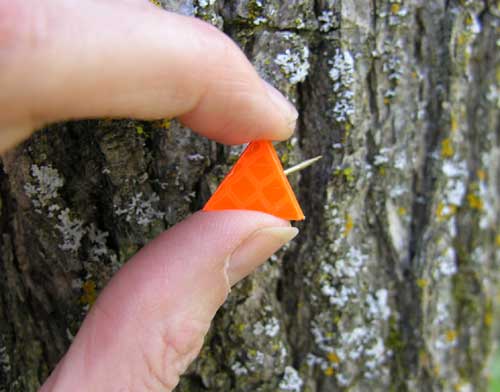 Last year I got an email from a customer in Japan, of all places, scolding me for alleged tree damage cause by all tack trail markers.  He heard this “through the grapevine” but had no reference or scientific proof.  At first I was defensive.  But then, I always strive to consider the impassioned views of others, so I listened – seeking to understand, but ready to refute.

He was doing nighttime treasure hunt with friends and wanted to use FireTacks trail markers to guide him and his friends through remote areas in the dark.  However, he understood that FireTacks are just that… tiny tacks, with pins that affix to trees for forest navigation purposes.  I was able to direct him to others of our products that did not involve pins but were either adhesive back or “Velcro” affixed, so he was happy.  That could have been the end of it, but then I really wanted to know – do tack trail markers cause tree damage?

Not just FireTacks, but any commercial tack trail marker available on the market today?  I was out to refute this notion for obvious reasons.  I wanted integrity for my product or at least total knowledge of what they might do.  In the course of doing research however, the selfish motive for commercial gain gave way to the reality that there just might be some validity to my customer’s concern.  But – could a trail marker manufacturer do legitimate research on this issue without being perceived as a fox in the henhouse?   Yes, I thought I could.  The truth is the truth no matter how we might fool ourselves or dance around it and I wasn’t about to become “the emperor with no clothes”.

When I first bought my 80 acres of heavily wooded Minnesota forest land ten years ago, the first thing I did was to build a permanent tree stand.  I had hunted only from portable stands on public land in the past, so having permanent stands was to me a primary privilege of being a land owner.  I don’t do anything half way however.  I found a tri-cluster of 14 inch diameter oaks and spent two weeks building a triangle stand with shooting rests and gear hooks.  I did use a commercial folding step ladder that I ratcheted to the tree.  The rest of the stand was wee tree house of 2×4’s and I thought it was a thing of beauty.  I hunted from the stand cloaked in the oak leaves that first year, and was ready to build more permanent tree stands.

The following spring, the tri-cluster of oaks did not leaf out and in fact died and never leafed out again.  I was stunned.  The nails used to construct the stand had killed the tree(s).  There were a couple other permanent stands on the property, built by former land owners over the years, and I began to notice they were dead or dying as well.  Right then and there I vowed to never build another permanent stand unless I could do it without nailing into the trees.  Instead, I erected 18 or more portable stands with strap on steps.  However, over the years I have put thousands of FireTacks on just as many trees, on public and private lands, and not one tree ever died or sustained damage.

So, from experience, I was not convinced that pins from trail tacks killed trees.  But maybe I just had tough trees?

Being a computer nerd, I started my research first with searches on the internet for tree damage, and secondly, asking experts I knew in the hunting and outdoor industries.   Cambium damage was the foremost concern.  The cambium is a thin layer of tree cells that lies just below the bark.    The cambium transports water and nutrients to and from the roots and leaves.  It also produces new bark tissue as plants grow.   Anything that damages the bark or the underlying cambium can weaken trees and make them more vulnerable to disease and insects.  An example of the reality of this is when a tree is “girdled”, that is, the bark is either intentionally removed or cut deeply at the base of the tree with the intent to kill the tree.  This is a valid way that foresters thin volunteer trees from clear cuts or remove undesirable trees, for example.  Animals that naturally chew and scratch on trees can cause their death for the same reasons.  Bucks rub, bears scratch, beavers chew and squirrels girdle the tops of evergreen trees.

I posed the question of possible trail tack damage to foresters, scientists and college professors.  One forester noted to me that while he was unaware of specific research tying tacks to tree damage, he was sure that nails into trees certainly could cause damage or death to trees because he had actually seen it.  Of course I agreed, since I inadvertently murdered three of my own trees.  He further noted that if the trail tacks only penetrated the outer bark and not the cambium, no damage would occur.  He noted too that if tacks were clean and free of bacteria before being inserted, the probability of tree damage was nil to none because of their tiny size.  The tiny size also would not affect or compromise the cambium structure in a tree.

I then found comments about trail marker with pins, on the groundspeak.com web site and a string of posts relating to tree damage noted from an organization in Great Britain called the “The Woodland Trust”.  The comments there aligned with the comments from the scientists at the biology archive of the United State Department of Energy.  Objects driven past the bark and into the cambium could introduce disease bacteria and fungi into the cambium.  Further, if left in trees, nails or pins with deep penetration can also end up being “included” or incorporated into the tree, meaning the tree will grow around them which also interferes with the tree health and growth.  If markers are clean and free of infectants, and not inserted deeper than the outer bark layer, no damage would be imminent.  Forestry experts indicate that there is no problem with small profile trail markers and they themselves use such marking systems for their research.

I then contacted several experts who provided information from a USDA Forest Service lab, as well as University Professors, Arboretums and other sources.  One USDA location had developed a tree marking system that involved driving a 3mm wire into the base of a tree for marking purposes.  These were long term experiments and would not have been employed if they caused damage to trees, I was told.  Otherwise, the experiments would be useless.  One expert shared that the compaction from foot traffic on trails (not to mention mountain bikes or ATV’s) caused far more stress and damage to trees than a tiny pin marker could ever do.  I was additionally told that trail markers will not become incorporated or included in trees if they are affixed to the bark only.

“What is left unsaid”, says PhD Ray Hicks, professor of Silvaculture, Division of Forestry at West Virginia University, “is that trees are wounded by many natural events (ice, insects, animals, wind, etc.) and have evolved very effective mechanisms for dealing with injury.  In fact work done by the USDA Forest Service shows that even logging wounds up to 50 square inches in size are capable of healing and walling out decay.

“I don’t believe a shallow penetration like a pin will cause any disruption to the vascular system of a tree.  In fact, scientists have attempted to experimentally disrupt water flow in tree stems by cutting part way through, and find that trees are capable of redirecting flow laterally around the wound” said Hicks.

Another wildlife biologist and tree expert noted “a tack might damage a half inch diameter sapling because it would penetrate the cambium.  But if a tack goes into a 5 inch oak, it will not penetrate to the cambium.  So I would say on any tree bigger than a sapling, there is no effect and certainly no effect when you are talking about timber sized trees 12 inch diameter and greater.”

What I gathered from this research was that scientific proof of small trail marker damage is not available because the markers have not demonstrated damage.  What can be concluded however is that trail markers with longer pins could be suspect and cause damage to trees just as nails cause damage.  A longer pin would be required if a trail marker was physically larger or heavier.  The larger or heavier the marker, the longer the pin would need to be for the marker to stay in a tree.  When you are looking for tack trail markers, be sure the markers are featherweight and that the pin length is less than 10mm (7/16inch or so) to avoid reaching the cambium on smaller trees.    That said, trees have an amazing ability to heal and redirect even with the most invasive violations of the cambium layer.  As such, before small tack trail markers are maligned, many other things that are truly  riddled with bacteria and disease should be scrutinized –  like, woodpeckers, porcupines, bears, whitetail deer, insects, and the countless other things in nature that are significantly detrimental to trees. Yet, the trees have prevailed since the beginning of time.

Common sense and knowing the facts are keys to woodland preservation just like they are to most issues we face in our world.

For the best in Trail Markers go to: WildTech

This Ain’t No House Cat