This Ain’t No House Cat 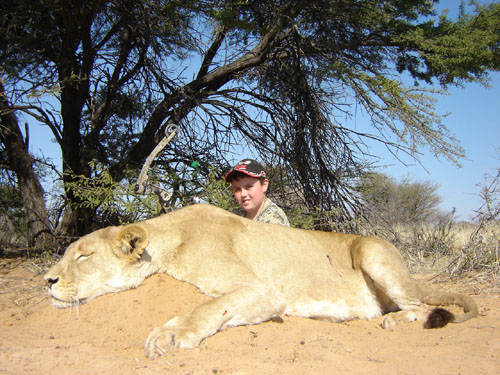 I’ve had many exciting bowhunts but my Lion hunting adventure with Limcroma Safaris has to rate at the top.  I still can’t stop thinking about it! Kids, visit www.Limcroma.com and click on “Photo Album” and “Safari Videos” to see some cool pictures and videos of African critters.

Dad and I spent 23 days in Africa and spent most of our time bow hunting in the Limpopo Province of South Africa but on the 19th day of our safari we found ourselves traveling in a Toyota buckie heading for the Kalahari some eight hours away with Hannes and Johan. Kids, a buckie is a truck in the native language of South Africans. The journey was mostly dirt road and sometimes no road at all. We traveled all afternoon and well into the night. The weather started off as a warm 75 degrees during the day but when we arrived at the hunting area in the Kalahari at night the temperature dropped to 35 degrees. It is amazing how the climate in the desert area can change from hot to cold when the sun goes down.

At the Kalahari camp we were greeted by Freddy and his wife Zerna. They waited up for us and even had a warm meal waiting for us. The camp was beautiful and warm. Dad and I had a hard time falling asleep. We lay in bed talking about Lion and wondering what tomorrow would bring.

We were up early the next morning for breakfast, hot tea, coffee, pastries, breads, and jam. At breakfast we were greeted by twin Suricates, we call them Meercats. They walked right up to me. They were a little shy at first, but soon after our initial greeting they were sitting in my lap. That was cool!

After breakfast we decided to take a few practice shots with my bow. We placed a target at 45 yards. I practiced everyday from this distance in preparation of the Lion hunt and I was shooting great every day except the morning of my Lion hunt. Every day I could hit a three inch square at 45 yards with my Martin Leopard Bow and Crimson Croc Broadheads. This morning my arrows were going everywhere but in the three inch square. We moved up to 20 yards and my shooting was not getting better! I could not understand what was going on?

I was starting to get worried. Dad pointed to my arrow rest. I use a Whisker Biscuit arrow rest. My Whisker housing part of my rest was bent badly from the rough trip through the Kalahari. Dad and Freddy used a Leatherman tool to reshape the housing. A few arrows later and a minor adjustment of the sights, my arrows were smacking the three inch square at 45 yards. This proved to be a great lesson learned. Keep your equipment as simple as possible. The Whisker Biscuit rest is simple and easy to work on even in the middle of the Kalahari! If I would have been using a mechanical rest, my hunt may have been over. Now with my bow and confidence repaired, we were off looking for Lion tracks.

Hannes and Freddy Were in the cab of the Toyota Land Cruiser Pick-up, Dad, Johan, and me were in the bed of the truck sitting in comfortable safari seats, and two trackers were sitting on the hood of the truck watching for Lion tracks. We drove miles through the Kalahari sand in search of tracks. We saw a ton of animals but no sign of Lions. After several hours of driving Freddy eased the truck to a stop, while Hannes hung out the window, pointed to a big track in the sand, looked back at us and said, “Boys, this ain’t no house cat!” When I heard that my heart started pounding. The trackers told us that the track was very fresh.

We quietly got off the truck and discussed a plan. Lions hunt and feed all night and sleep most of the day. Our plan was to quietly track the lion and catch it resting in hopes of getting close enough for a bow shot! Freddy with his 505 Gibs Rifle and the trackers would lead, I would follow Freddy with my bow, Hannes and Johan would back me up with their 458 Winchester Magnum and CZ 375 H&H Magnum Rifles, and Dad would take up the rear video taping the whole amazing adventure. Dad was also carrying a back-up rifle chambered for 35 Whelen.

The trackers were amazing, even when the tracks lead in to tall grass they were able to track the cat. We were tracking for two hours and caught our first glimpse. The cat blended in amazingly well, almost like a ghost. There was one problem however, this cat was not sleeping or resting. This cat was on an Impala kill. The cat spotted us and quickly disappeared. I can not describe what it feels like to stare in to the golden eyes of a Lion when it wrinkles its lip to show you its teeth while you are holding a bow and arrow!

For the next four hours we tracked the lion only to see it two more times for a split second. No telling how far we had gone. My calf muscles were aching from walking in the fine sand. The temperature had climbed to 85 degrees. Just about the time I was thinking we would never see the Lion again, the trackers yelled and grabbed me by my collar and started dragging me backwards. Hannes, Freddy, and Johan jumped in front of me with their guns raised like they were ready to fire. We almost stepped right in to the cat! We were within five yards of a Lion lying in some fallen brush. We backed way off to avoid a charge! That was a good call.

We took a short rest to gather our wits. The cat had made a hook to see what was following it. Freddy said that the cat will do it again. I had to be ready and 100 percent alert. Sure enough an hour later while following the tracks in a northerly direction we spotted the cat 30 yards to our left hiding in some brush. Freddy was right, the cat made another hook to catch its back trail. We eased around some brush, closing the distance to 26 yards. Hannes told me to draw my bow as the Lion stood up. The Lion stared right in to my eyes, I could feel the stare and my entire body was pounding to the beat of my heart. When the cat turned and quartered away from me I released a Victory Arrow tipped with a Crimson Croc Broadhead. The arrow flew true finding its place in the Lion. The Lion roared and like a ghost vanished! Dad caught the shot on video. The cat was at 26 yards when it roared. When you play the tape the roar sounds like you stuck the microphone in the Lion’s face, LOUD! For a minute things seemed a little foggy, or in slow motion until all the guys started slapping me on the back. My heart was beating faster than ever!

We walked to where the Lion was standing at the moment of the shot. My arrow laid there covered in blood. I got total pass through, which was a good thing!

We waited several minutes before picking up the track. Hannes, Freddy, and Johan lead the way with rifles ready. Lion can be very dangerous in this situation. They are called man-eaters for a reason. About 75 yards in to the follow up the trackers pointed and quietly but excitedly started taking fast to Freddy. The Lion was lying under some brush. We slowly approached to with in 30 yards. Everyone’s adrenaline was flowing. We could not be sure if the Lion was down for good or not. Hannes told me to place an arrow in to the Lion’s chest for an insurance shot. My arrow found its mark!

After several more minutes Freddy approached the lion from the side while Hannes and Johan backed him up. I was focused on Freddy and the lion. Freddy touched the lion’s eye with the barrel of his gun. The lion did not move. Freddy then placed his foot on the lion to shake it. Freddy snapped the safety back on his rifle and said, “One dead Lion!” Cheers erupted in the Kalahari! Dad gave me a huge hug so big that I was light headed for a second!

We took a bunch of pictures and celebrated for an hour or so while the trackers hiked to get the buckie. Hannes shook my hand and said, “Congratulations, this is your first of the Big Six!”

Kid’s, the Big Six is what they call the six most dangerous animals in Africa. They are the Lion, Leopard, Cape Buffalo, Rhino, Elephant, and Hippo. We loaded the huge cat in to the buckie and headed back to camp. The skinners performed their magic and caped out the Lion for a life size mount.

We quickly gathered up a few cold drinks and headed back out in to the Kalahari to celebrate the sun set of one of the most exciting days of my life!! Wow! How do I end?

Adults remember; “Every kid is waiting to be invited outdoors.” “Ask them!”

To see the real action go to:
Ty Weaver Lion With Bow