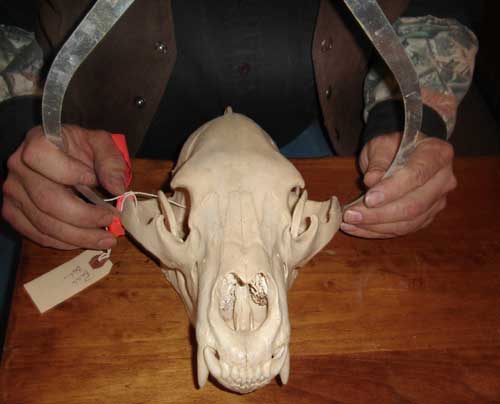 As a Master Measurer for Safari Club International, my husband Jerry is asked to score many gorgeous animals.    Saying you have an animal that made a trophy record book is a great reward, but is it necessary?

To some people, keeping track of scores is only a way for people to boast about their kill, adding proof that “mine is bigger than yours.”  While crowing over a big kill can be a really nice piece of the puzzle, there is much more involved in record keeping and to the clubs in charge of classifying the animals. Trophy record books are used extensively for conservation purposes; a tool used by state and federal wildlife agencies alike.   Herd size, condition, and range and habitat stability over several years can be tracked and managed with the aid of these records.

Safari Club International, Boone and Crockett, Pope and Young are some of the most recognized trophy record keeping clubs in the United States today.  There are smaller organizations in most states with some of the different clubs such as fishing clubs and turkey clubs.
Finding out which book your animal qualities for can be more complicated and breaking down the different scoring methods, qualifications and philosophies gets really tricky.

Safari Club International is an organization dedicated to the protection of hunters and hunting all over the world, their main focus is conservation, and protecting our hunting heritage through hunting legislation, and chapter involvement at the community level. SCI hosts the most comprehensive record keeping system worldwide and recognizes all aspects of an animal stating that size matters as much as or perhaps more than perfection.  SCI recognizes animals taken with a rifle, bow, handgun, or muzzleloader.  There are categories for both free range and estate or high-fence harvested animals.    SCI has two types of measurer; official scorer and master scorer.  For most trophies, official scoring is all that is required. If an animal may potentially be a top ten contender, it has to go through a drying period and be rescored by a master measurer.

The Boone and Crockett Club was established in 1887 by Theodore Roosevelt along with several other influential men of his time and has a rich and fascinating history. Through conservation efforts they saved Yellowstone Park and set fair chase guidelines that are still in practice today. President Roosevelt understood the need to conserve and manage our rapidly vanishing wildlife while at the same time preserving our right to hunt.  The Boone and Crockett trophy record book is dedicated to firearm harvested North American game.  The system places emphasis on the symmetry of a rack and penalizes portions of the rack that are non-symmetrical resulting in  well-matched trophies placing higher than mismatched trophies of comparable size.

Pope and Young Club was founded in 1961 and named after pioneer bowhunters Dr. Saxton Pope and Arthur Young.  Pope and Young with their scoring patterned after Boone and Crockett is dedicated specifically to the archery enthusiast.

Animals deemed trophy book animals are those which have made the minimum score to qualify for a particular record keeping organization. These minimum numbers are usually posted online.   A certified measurer for your club will also have this information.  Getting an initial measurement on your own helps you know if you are close to the minimum requirements. Usually there are printable measuring instructions on the club websites.   Contact the organization you wish to be recorded with to have them give you the name of a measurer in your area.

Most often you will need to be a member of the organization in question in order to have your animal considered for a trophy record book.  Membership may be included in your registration fee if you are not yet a member.   Most of these organizations have implemented record keeping as a service to their patrons.

The hunter needs to take several good field pictures of the animal and rack from different angles.

Remember a trophy is in the eye of the beholder and all harvested animals are important.  Just because it doesn’t “make book” doesn’t mean it is not something to be extremely proud of.   A well worn book of snapshots depicting sensational hunting trips is every bit as important, if not more so than making a record book entry.  Record books change every 3 years or so, but fond memories never do.

Each of the aforementioned organizations recognizes that our best conservation efforts are in the lessons we teach to our children and grandchildren through positive hunting experiences.

25 Years of Bustin Aspirins and Going for More

Thinking of Becoming a Hunter?