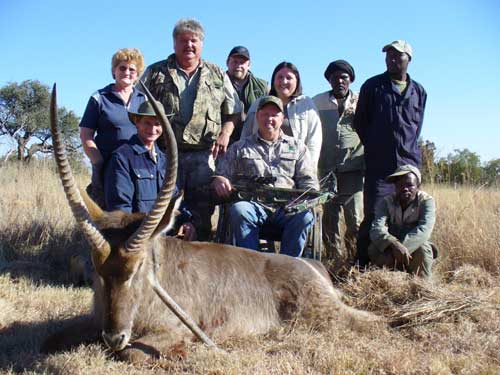 I lowered my crossbow and lined up the scope on a good looking Gemsbok about 25 yards away. This was the animal I came to Africa for and it was just seconds away from being mine!  It was not a big one but after several days, I decided to take him.  As I started to squeeze the trigger,  my PH tapped me on the shoulder and said ” Don’t shoot !”

I gave him a puzzled look and whispered ” Why?”

As he stared out the window he motioned me to look ahead as a big Wildebeest was coming in.  All week long he had been pushing me to shoot a Wildebeest to see if the crossbow would handle the job.  I reluctantly agreed and lowed my bow and waited for the ‘Poor man’s’ buffalo to come in.

This was my second trip to Africa with Alex of Kudu Adventure Safaris.  It is true in what they say that once you go to Africa it’s in your blood and you have to go back.  My 2007 hunt was successful and I managed to take a Warthog, Impala, Blesbuck and a Kudu.  After seeing Alex at a sport show in the spring of 2009, I got the fever again so I made plans to go back in late July.  Finally July 26 came and with everything ready, my wife Diane and I got on a plane for our fist stop in Atlanta.  After a couple of hours layover we boarded the plane for the 16 hour flight to Johannesburg.

Upon arrival in Jo’berg we cleared customs, picked up our gear and met Alex at the gate.  We loaded everything on his truck and with it being very late we drove an hour and half to his house and called it a night.  The next morning it was off for the two hour drive to the Tebalja Safaris camp.  Once there we unloaded our gear and got settled in and I went out and shot my bow to make sure it still was zeroed in.

That afternoon we went out to the ground blind for the evening hunt.  We saw many different animals on the way out and I couldn’t wait to the get to the blind and start hunting. The blind was easy to get into and very spacious with enough room for Alex, Diane and me. It had narrow windows for shooting and small windows for observation all with one- way glass. We saw many animals but nothing I wanted to take so it was back to camp.

The next morning we tried a different blind and again we spotted many animals but most were cows or small bulls.  After lunch and a quick rest it was back out to the first blind by the water hole for the evening hunt.  We had cow Waterbucks milling around us most of the time.  With about an hour of light left we spotted a bull Waterbuck 200 yards on the other side of the water hole.  He saw the cows and started to make his way toward our blind.

Waterbuck was not on my list of animals to shoot but Alex gave me a good deal and I decided that if I got the opportunity, I would take him.  About 30 minutes later he came up the hill to where the cows were and walked over to the far side of the blind…..this was the moment of truth!  As I picked up my Horton crossbow, Alex eased the window open as I lined up the sights and launched the Rage- tipped broadhead.  We heard the loud ‘smack’ and animals took off in all directions.  Alex said it looked like a good hit as he watched it go out of sight.

We  ‘high- fived’ each other and did the usual congratulatory celebration then got out of the blind and went to the site of the hit.  There was blood at the spot and a good trail going down the hill.  After a 30 minute wait, Alex and Diane took up the blood trail and found the arrow 50 yards away with signs of a good hit.  Another 50 yards and they found two pools of blood.  Alex determined that they might be pushing the Waterbuck and it was getting dark out so we thought it might be better to wait till morning.  It was hard to sleep that night as I kept replaying the shot over and over trying to figure out what might have gone wrong.

The next morning Alex along with the camp manager, his wife and son and two trackers took up the trail to locate my trophy.  After a short tracking job they found my Waterbuck but the pesky Jackals had found it first.  Luckily they did not ruin the cape or the head.  Then it was back to camp for pictures.  We hung it in the shed and Norman, our tracker prepared the mount, cut off a few steaks and loaded it up for our journey to the next camp. While he was cutting it up we checked to see what had happen to the arrow.  It was a perfect entrance hole but hit a rib and caused the arrow to exit low and way back. In the end however, it was a killing shot.
Two hours later we pulled into Ashford Lodge and met owner Vikus Ras.  As we unloaded and got settled in I took a look around. You could tell that this camp was modern and well maintained with great accommodations.  It was certainly going to be a pleasant stay.

That afternoon we went to one of the spacious, well built ground blinds for the evening hunt.  As before, we saw many animals but nothing I wanted to harvest.  The next morning we tried a different blind but with the cold windy weather  no animals were came in. After lunch the wind died down and it warmed up so we went back to the blind we used the first day.  We saw Waterbuck,  Impala,  Kudu,  Ostrich  and my dream animal,  a gorgeous Gemsbok !   The cows and the young Gemsbok came in right away but the bigger bulls hung back until things looked safe.

Finally here they came and I got ready to shoot.  Which brings us back to the beginning of the story.  Wildebeest are a tough animal and Alex said that 90% of animals that are shot and lost are Wildebeest which is why he wanted me to shoot one to see if a crossbow could handle the job.  Wildebeest are very spooky and this one took 45 minutes to finally feel safe enough to come toward our blind.  We had to wait for him to clear the other animals and get broadside for a shot.  Finally at 25 yards he turned and gave me the shot I had been waiting for!  Alex gave me some last minute instructions told me to get ready and opened the window.  I lined up the crosshairs on the ‘sweet spot’ and sent the Wasp- tipped broadhead on its way.  We heard the loud ‘smack’  and there was dust flying everywhere as all the animals took off in every direction.

Alex followed the bull with his binoculars as it went behind some brush and  he thought he saw it fall.  Then it was another big celebration with hugs and ‘high five’s’ as well as pats on the back.  We made the call to Vikus to let him know we had one down and he came out with a trailer and a couple of helpers.

Diane and I stayed by the blind as they went to search for my trophy.  As they went behind some brush we heard them whooping and hollering and I knew they had found the Wildebeest!  Vikus came back and picked us up and we went to view the fallen beast.  He only went about a 100 yards after the shot and fell over.  As we approached this bull I could only think he was absolutely monstrous!  It was a perfect shot and the end came very quick. The horns measured 17 inches not real big but good enough.  Vikus said this was the first time he had seen a Wildebeest fall that quickly even one shot with a rifle. There were hand shakes all around and we took many pictures as we loaded him up for the ride back to camp.

That night we had a victory toast and a delicious meal of Waterbuck stew.  With one more day to hunt I thought I would get my chance at a Gemsbok….but it was not to be.  That night it started to rain and got very cold.  It did not get any better the next day with periods of sleet and hail and to make things worse, lightning hit our camp transformer and knocked out the electric power.  It was a long day and an even colder night with no source of heat.  We had planned to go to a preserve for a picture-taking safari but with two inches of rain the roads were impassable.  We decided to do the tourist thing and went to a craft market and bought some souvenirs.  That night we went back to Alex’s house and had a meal of Wildebeest steaks.  The next day we packed up, went to the airport for the 16 hour flight home.

Africa is truly the ultimate place to hunt.  Even being in a wheelchair did not hinder me from achieving my goal.  Alex and his crew were absolutely great and I was very well taken care of.  If you would like to take the African experience give Alex Duvenage a call at 427 823 377 6336. You will definitely have the hunt of a lifetime no matter what your disability happens to be.

For more information you can go to www.kuduadventuresafaris.co.za

Watch Out for the Storm