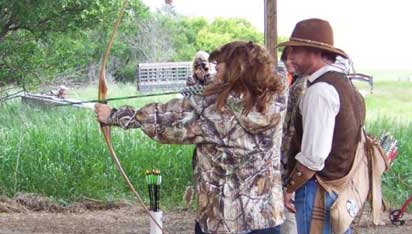 Growing up it never really occurred to me to go hunting or shooting for recreation. Hunting was something my dad and his friends did while my mom and sister and I viewed his hunting trips as a time to check out new restaurants. I am sure my dad would have enjoyed taking us along but we never thought to ask and he just did his thing each fall. He taught us the basics of gun handling and shooting so I enjoyed that, but it wasn’t until many years later after taking a self protection shooting class did I begin to take it seriously. For more go to: Team Huntress

Jerry asked me to go hunting with him each year for several years, but the thought of hanging out with his friends for a week at hunting camp with no other women in sight didn’t exactly thrill me either. My ideas of hunting with the guys were fairly stereotypical and involved sights and smells women are not traditionally thrilled with! I was completely uneducated about hunting and really not too sure I wanted to learn. This was a man’s world and rather than trying to fit in, I stayed home with the kids.

Fast forward several years; after letting my husband take the kids on several hunts without me, I realized I was missing out on special memories that I should have been sharing with my family. Sure I enjoyed having some “me” time but at what cost? How much more could I have enjoyed my daughter or son shooting their first bull elk; if I had actually BEEN there to see their faces not just sharing their glory when they returned?

I am happy to say that now for the most part I do share in those moments, but even better than merely observing, I share in them as a hunting companion. I personally have had only one big game kill with a small pronghorn, but I have had many adventures such as having a frightened cow elk almost trample over the top of me as I napped on the side of a hill. I can now enjoy the telling of my own hunting stories and relate to my family in a new exciting way.

My story is typical of many women. We don’t attempt something new for fear of failure or of looking inept in front of others. We may have a less than patient father, spouse, teacher or no teacher at all.

Why should children of single mothers have to forego an awareness of hunting and the importance of gun safety and usage just because she doesn’t have a man around? You guessed it,  she shouldn’t!

In June I taught a field care/ taxidermy class at the Team Huntress Outdoor Adventure camp hosted by Dave Olsen and family at their outstanding hunting lodge called Pheasant Phun in Hitchcock, SD. Our Team Huntress Outdoor Adventure Weekend was designed by Jane Keller with the help of several women in the hunting industry who believe any woman who wants to learn to shoot and hunt should be able to lean in an encouraging, stress free, safe environment.

Hunting is not always what draws a woman to shooting. While meeting all of the attendees at our initial dinner and wine tasting there were women who had never picked up a gun of any kind like Marin Broucek who turned out to be an amazing shot and a vegetarian to boot! There were ladies who wanted to expand their previous knowledge and try something new like Lynn Pankey from Realtree, Inc. who is quite a turkey hunting enthusiast.

The women were given experience in several shooting disciplines in a relaxed, thoroughly encouraging setting. I went as a presenter, but became a participant in several classes and even learned how to shoot both recurve and longbows from Stacy and Mike “Hawk” Huston. I had some previous experience with a compound bow, but quickly fell under the spell of simple primitive shooting; just me the bow and some arrows. I felt I did well for my first experience but may have felt intimidated learning in a large group of men.

Kirstie Pike, CEO of Prois Women’s Hunting Apparel in Grand Junction, CO taught an amazing class about first aid emergencies, as well as teaching us the finer details of layering to stay warm in the outdoors. We learned about the new fabrics designed to wick moisture away from your skin as well as providing insulation. (For the Prois Line)

Pistol class led by Barbara Baird with assistance from her husband Jason, gave the ladies a strong introduction in gun safety and a turn at trying several different pistol types. There was even a gigantic Desert Eagle .50 caliber pistol that several ladies tried.  I gained more confidence assisting at the range and walking each gal assigned to me through the shooting procedures; but the best part was seeing the bright smiles on the ladies as they realized that shooting was something they could do and they could do it well!

Of the many things I experienced at our Team Huntress Outdoor Adventure Camp, the fellowship and immediate friendships made there is on the top of my list for the weekend. Watching new women hunters and shooters really see first-hand that they could accomplish great things in what used to be considered “men only” pursuits was so much fun!

The ladies at Team Huntress were pampered with incredible food created in the kitchen by our house mom extraordinaire Annie Olsen and her staff. Then we had our choice of massages, manicures, pedicures and yoga classes on the front porch in the early mornings after being served fresh coffee. Of course we do love to mix it up with tough things like guns and bows, but after all we are ladies and a little pampering makes us very happy campers! (Go to: Team Huntress)

Watch  for the next Team Huntress Outdoor Adventure Camp and visit www.PheasantPhun.com to book your next pheasant hunting adventure.

Due to range conflicts, the Team Huntress Outdoor Adventure Clinic, hosted by Campwildgirls.com in Wisconsin on Aug. 21-23, has been relocated to its home base in South Dakota. After a chauffeured ride from the nearest airport to the OJbar Ranch, located in the heart of South Dakota, our team of ambassadors in the outdoor industry will welcome you. The three-day event includes a fire-pit meet-and-greet, instruction in archery and firearms of many calibers, gourmet meals and spa treatments,  the Team Huntress signature touch. Currently women from both coasts and points in-between are coming together; you don’t want to miss this premiere experience. Call today: 605-266-2848 or Jane Keller at 605-450-0931. Follow on Twitter: @teamhuntress

For more go to: Team Huntress