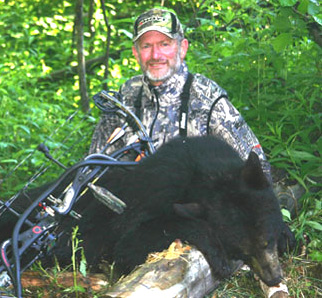 I do a lot of bowhunting each year. That said, the question then becomes, “If you get to go to so many cool places, why would you go back to the same bear camp you hunted the year before? Especially since you have been hunting black bears for almost 40 years and written a book on the topic?”

This June I did just that, returning to Domaine Shannon in Quebec. I hunted this same locale in 2009 with a rifle willed to me by an old friend and mentor who had passed away just three weeks before the hunt, and it was truly a magical trip for me. I shot a very good bear the first day and experienced some wide-open fishing for walleye and northern pike. The hunt was so good, the lodge owners, guides, and staff so friendly and competent, the atmosphere so relaxed, I just had to come back with my bow.

The lodge – a family owned and operated business for the past 40 years run by brothers Serge and Sylvain Danis — boasts a bear hunting track record that’s hard to beat. I was on the last hunt in 2010, and when we were done the season’s hunters went 38 for 40. “We have a guarantee at the lodge that says if you do not have an opportunity at a mature bear during your week’s hunt, you can come back next year on us,” Serge Danis told me. “All you pay is your transportation and the cost of the license.” All told, the lodge has almost 600 square miles of prime bear habitat to hunt, 65 permanent enclosed rifle hunting stands with mosquito screens, and dozens of large wooden platform bow stands with seats set anywhere from 15-20 yards from the baits. All hunting is done over baits which are serviced daily by a crew headed up by head guide Isaie (“EZ”) Boileau, a local man who is as skilled a woodsman and bear hunter as I have ever met. In his 10 years at Domaine Shannon, “EZ” has guided over 400 successful bear hunting clients. You think he knows his stuff?

In my party were Ben O’Brien, who heads up the American Hunter websites, and Montreal-based booking agent and friend Armando Vendittozzi. Ben would be hunting with a rifle, and Armando, a new bowhunter, was hoping to take his first bear with his two-year old Hoyt Katerra, set at 61 lbs. and shooting Easton Axis shafts topped with 100-grain, 3-bladed Muzzy’s.

Our first evening on stand – you only hunt evenings – it poured rain. All of us had bears in front of us, but nobody took a shot. Turns out the bear I let go was bigger than the one I ended up taking, but isn’t that always the way it goes?

Second evening, Ben connected on a very nice 150-lb. boar and he was tickled. It as his first-ever black bear and the party was on! Armando and I had tried new stands and saw no bears, a pretty unusual occurrence for this place. Day three was different. Armando went to a ground blind where some earlier hunters had seen some good bears but had no shots, and that’s when all his practice paid off. When I arrived “Army” was having a bit of a problem getting his bow shooting right, but it only took a little time to get it tuned up and sighted in, after which he was shooting BB’s. That evening he took his first bear, a dandy 185-pounder with a perfect double-lung shot at 25 steps. It was awesome!

I went to a new stand as well, with the bait set in an extremely small opening in a jungle maybe 20 feet wide by 10 feet deep. About an hour before dark a very large bear strolled through the opening, sniffed the bait, and kept on going. There was no chance for a shot, so I decided then and there to try this same stand the next evening.

So the next morning, while Ben and Armando were off enjoying the area’s excellent fishing, I got my gear ready, shot a few arrows, had a nap, and by 5:00 p.m. EZ took me down the road. It was the hunt’s next-to-last evening, and when the bear came in, I was ready.

Unfortunately, this was not Mr. Big of the previous evening. Instead it was a solid, average bear for this region, a 150-pounder with perfect hair, and I decided to take him. On this hunt I was shooting the hot new Hoyt Carbon Matrix bow set at 70 lbs., 28-inch Gold Tip 5575 shafts, and a 100-grain Swhacker mechanical broadhead. The shot was only 17 yards and the shaft blew right through the bear’s chest.

Domaine Shannon is my kind of bear camp. It’s a working man’s lodge with reasonable pricing, comfortable full-service cabins, a main lodge with a small bar and great meals with Direct TV so we could watch the World Cup soccer tournament. The lodge is also set up for wireless internet access, so you can stay in touch with family and work while there. The staff is as friendly and efficient as one could hope for. The guides skin your bear and fully prepare it and the necessary paperwork so you can take it back home with you. This would be a superb place to bring first-time hunters, including your spouse or children. Oh, yeah, what about that “working man” price? All inclusive – accommodations, guides, meals, etc. – its just $1900 for seven days. Without meals it’s $1700.

If you like to fish you can rent a boat and motor for $210 for the week. Nonresident licenses are a tick under another $150 U.S. You can rent a car in Montreal and drive up – its about 4 ½ hours north of the Montreal airport — drive your own vehicle from the states, or an airport pickup can be arranged for a fee. How the heck do you beat that, especially with that ‘get a shot or come back on us guarantee’?