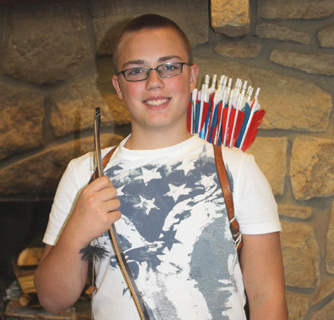 Perhaps it’s the eyes.  Rev. Stacy Groscup somehow saw it in my eyes.  He took me under his wing and had me on stage by the time I was 18 years old as his protege’ doing archery shows.  I saw that same look in a young man’s eyes today, July 8, 2010 as Jim and Chris Hurt stopped by my family’s retail archery store for a visit.  Chris Hurt is now doing archery exhibitions and with his father as his assistant the two are starting to travel and entertain crowds.  They’ve done several local shows back in Pennsylvania and this weekend will be at an event here in West Virginia doing exhibitions for the attendees there.

The fact that Chris is only 14 years old means he’s getting a jump start on most of us exhibition shooters.  I was 18.  Rev. Stacy Groscup was in Seminary before he did his first exhibition.  I would venture to say Chris has most exhibition shooters beat.  He was inspired when he was ten years old after seeing Byron Ferguson perform.  I believe Chris’ dad told me he was 10 when he first starting shooting aerial discs from mid air.  Like me, Chris started with large targets and worked his way down to a snuff can, a Lifesaver, and now an aspirin tablet.  At his age this is an impressive feat!

Chris shoots a custom made recurve bow and shoots instinctively.  He has a routine he does and his father helps him at all the shows.  I heard about Chris and contacted his father awhile back and invited them by if they were ever in the area.  Today they were and so they came by for some lunch and to visit.  Chris is attentive and very well mannered and carries himself well.  You can see that he’s enthusiastic about what he does and the sport of archery.  His father is a good guy and you can tell he is proud of his son, as well he should be.

Having someone this young on the exhibition trail is an awesome feat for the sport of archery.  It also tells me something about Chris’ family.  Obviously his father Jim worked with him from a young age and still takes the time to work with his son and guide him.  It was great seeing a father and son working together, and it speaks well of the way Chris has been raised.  Hopefully he will be a positive influence on the sport and help recruit more and more young people and their families into the sport of archery.  Now that the archery bug has bitten Chris, I’ll bet like me at his age he’ll be too busy shooting archery to venture into trouble like some teens.  Having a family support you makes all the difference in the world.

I welcome this young man to the world of exhibition shooting and hope that if he is in your area someday you’ll go see his show.  Like me, he is following the tracks of archery heroes who have gone before.  Men like Bear, Hill, and Groscup to name a few.  All it took for Chris to get the bug was seeing Byron Ferguson do one of his archery shows.  For me it was Bear and Groscup.  And so it goes.  I’d bet Byron would say for him it was Hill.  When I started out, Stacy took me under his wing and gently taught me the ropes.  Like all heroes, Stacy seemed bigger than life but was always willing to listen, answer questions, and offer his wisdom and council, sometimes even when I didn’t seek it but he felt like I needed to hear it.  He turned out to be a best friend, second father, and one of the biggest influences on my life.  And he could have walked away but when he saw my interest, he welcomed me and helped me.  The best role models always do.

Exhibition shooting is a great career.  Other exhibition shooters I’ve met or known have been Ann Clark, Joe Johnston, Galen Shinkle, Byron Ferguson, Bob Markworth, Randy Oitker, and I have talked with Ron LaClair on the phone. Sadly I missed Howard Hill, Dale Marcy, and some of the older exhibition shooters.  We all find a way we feel most comfortable performing and rarely have two shooters have been the same.  We all find a way to connect with an audience and showcase the sport of archery.  Most of us have a signature shot too.

I showed Chris and his dad Jim around the store, shared some advice and stories. It was a good visit and I thoroughly enjoyed it.  Then Chris said, “Here you go Mr. Frank” as he handed me one of his signed arrows.   I gladly signed and numbered him one of my stage arrows(#33)  and gave it to him as a thank you for his arrow.  Of my signed arrows, Ted Nugent has #9 and in my 25 year career I’ve signed and numbered less than 34 of these arrows for certain people.  Fred Bear started my interest in collecting signed arrows when he sent me one of his beat up old micro flite arrows back in the 1980’s.  Ever since then I have collected signed arrows from archery legends.   Today I added one arrow to that collection and although Chris may not be a legend just yet, give him time.  Remember, you heard it here first.  This young man will make a mark on this sport.  I could see that in his eyes.

Until Next Time… Adios & God Bless. 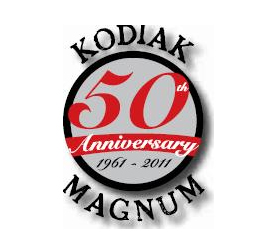