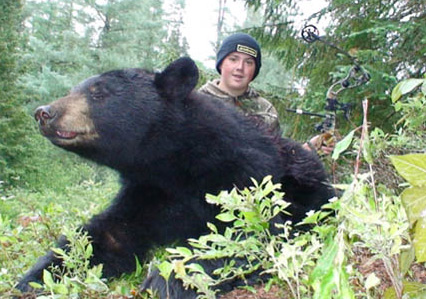 After a successful 2009 Quebec bear hunt we immediately booked for 2010. In 2009 I smacked a nice bear on day number two and Dad and his buddy Shocker smacked bear on day number three. We had a great time fishing as well. We ate a ton of fish …. I can still smell them cooking.

We thought June 3rd 2010 would never get here. Finally it did and after over packing, Dad, Shocker, and I were on a plane in Houston headed for Allentown, Pennsylvania. My Memmy and Pappy Dotter picked us up at the airport and after a short twenty minute drive I was in my home town of Lehighton.

Pappy Dotter had the trailer ready for our borrowed quads and gear. He also bought us a bunch of goodies for the trip including Moxie, my favorite soda pop! We met my great Uncle Ernie and finished packing and making all safety checks with the trailer.

Everything was working out great, even the trailer lights worked and then we discovered that the trailer brakes would not release when we tried to pull away. We tried several options, had many opinions and nothing worked until the Shocker pulled out his BlackBerry and Googled the trailer brake manufacturer, called a toll free number, asked for tech support. We actually took apart the trailer plug adapter while talking with the tech services guy, switched some wires inside the plug, put it back together, and the brake problem was fixed! Way to go Shocker! We were checked out and ready to go come 5am Friday morning.

After a sleepless night we were on the road and after 425 miles we would be in Fort-Coulonge, Quebec! Ron Henry lives in Fort Coulonge but the camp we wanted to hunt was 110 kilometers north of Fort-Coulonge via a dirt logging road. We loaded up with groceries, fuel, and bought our hunting and fishing licenses from Ron’s wife.

It took us three hours to drive the logging road but all was worth it when we arrived at the Black River camp. Ron has three cabins at this camp. He also has camps much closer to town. Now is a good time to tell you how the hunt works. Quebec is huge, the bugs are bad, hunting can be tough and there are no guarantees, other than a great feeling of self achievement if you are lucky and crafty enough to outsmart a Quebec bear.

This is bow hunting only (crossbows are legal) and Ron or one of his staff will have several bait sites pre-baited before your arrival. Once you arrive, usually on a Saturday morning, you will take over the chore of baiting. The bait is supplied to you and Saturday you are shown your locations and a few extra spots so you can hang your own stand. You are now on your own until you need help like retrieving and skinning a bear.

This is a semi-semi-semi-guided bow hunt, which is really cool. You prepare your own food. Each cabin is equipped with a full size gas stove and propane refrigerator. Propane is provided. Each cabin is equipped with a shower stall but water must be heated on the stove and hung in the stall for a shower. A generator is turned on to light up the skinning shed and cabins when needed. An aluminum boat will also be provided to each cabin for fishing. You will check out the following Saturday morning. I won’t quote you the exact price of the hunt because I don’t know when this will be published but you can plan on the hunt price being in the $750 to $900 range. This does not include your license fee or food.

My buddy Mitch was overseeing the Black River camp for Ron this year. He took us to our bait sites, which we were familiar with from the previous year so we could hang our stands. Every bait site we visited thus far was hit hard. We stopped at the site that Dad and I stuck our 2009 bears from. This place is the honey hole! My heart sank when we discovered the site not hit and very little bear sign to boot. I made my decision to hunt here any way. Last year we videoed way too many bears to ignore this spot. We finished hanging the remainder of the stands and headed back to camp for a shower because it was almost time to head back out.

Dad and I shared one quad and Shocker and Uncle Ernie shared the other. Our stand was 15 kilometers from camp and that first afternoon it seemed like we would never get there. I wanted on that stand bad!

Dad and I decided to sit together with Dad running the video camera. We arrived at the stand at 3:30pm and BAM our bait had been hit while we were taking showers at camp, talk about a confidence booster!

We quietly climbed on stand and I stress quietly. After making several bear hunts and more mistakes than I know, I figured out that most bears that are not right at the bait site they are resting close by with both ears wide open! If they hear you they will not come tonight or for up to a week and if only one bear is hitting your bait that could be disastrous.

I believe this is why active baits turn cold. I also believe that non-familiar bait smells can spook a bear. In the remote parts of Quebec meat and fish scraps are used predominately for baiting. If you dump a bunch of sweet smelling stuff on a remote bait site that only ever had meat on it, you will alert bears unless you are hunting an area that has “people food”, trash etc. close by.

The bear rut is another issue/opportunity that I have not figured out yet. Big boars can visit bait sites often sniffing for sows but when the sows catch on to this they stop visiting bait sites and the boars follow suite. This is why you will hear that the rut can either be great or down right terrible.

Back to the hunt; Dad and I are both settled in and all is quiet except the buzzing of black flies and mosquitoes. The Goat Tuff Opti-Vane fletched Victory Arrow is nocked on my bow and hanging on the camera arm.

At about 5pm Dad and I spot the bear at the same time! I’m up and ready and Dad has the camera on! The bear is a nice bear and it almost looks like he is tip-toeing to the bait. I can immediately tell it is a boar by his posture and bow legged walk. He approached the bait and quickly snatched a piece of meat and moved away to eat it, no shot.

He had the bait down in two gulps and started his way back. When he got to the log pile he walked to the right and as he was turning broadside with his head down, I came to full draw. He sensed something and stopped in a very awkward position with his front legs crossed. Now quartering toward me he looked up and his facial expression looked like he had seen a ghost. He ever so slowly lowered his head, almost like trying to hide and slowly turned to sneak away. When he turned broadside my Victory disappeared in the crease of his shoulder. He scampered off and I heard a crash and faint death moan. I knew the Crimson Croc broadhead had done its job.

Dad and I were fired up! We gave the bear plenty of time before tracking; actually we didn’t even look for blood he only went forty yards! It is very easy to get turned around in thick timber and since we forgot the GPS unit at camp Dad told me to wait at the bait site until he called for me. Dad was only gone for a minute when he called me.

My feet didn’t even touch the ground; I made a bee-line for Dad. I saw Dad with the camera rolling but not the bear. Dad bent down and pointed to his left; there was my bear! Not even two hours on stand and WOW! We did a quick interview and took a couple of photos and then the work began. Even though it is hard work getting a bear out of thick brush…..it is all part of the fun.

Temperatures dipped down in to the forties at night so we field dressed the bear and waited until morning to get some more photos and finish the life size skinning. Dad and I do some of our own taxidermy work so we skinned the bear off the skull and paws. The only thing left to do when we got home was fleshing and tanning.

I forgot to mention that Dad messed up his shoulder and could not draw his bow. Dad saw six bears this trip but could not draw his bow. His shoulder did not slow him down from fishing though. One morning we caught 34 pike from shore. We ate two tons of fish this trip. We did take the boat out a few times and had a blast. My Uncle Ernie made the most incredible ‘not falling out of the boat’ save I have ever seen. I just knew he was going in but some how he made a few Nadia Comaneci moves and landed back in the boat. Mitch was not so lucky……and I will leave it at that.

Out of eight guys on this hunt we smacked four nice bears. Actually a bear was shot each night for the first four nights. Two other hunters saw bears but one of the bears was spooked by a noise from his camera….oops! Unfortunately two hunters did not see bears but had a great time anyway. One of those hunters was Shocker. Sorry Shocker but you’ll get um next time.

Don’t miss the exciting video of this hunt: