Someone You Should Know – Bob Dill – Custom Knife Maker

by Fred Lutger
in Bowhunting Posts
0 0
A A
0

I always love going to hunting related shows and conventions. Not just to see the newest bows, guns and gadgets but also to see old friends and especially making new friends who enjoy the same passion I have for the outdoors.

This year at the National Wild Turkey Convention in Nashville, TN. I made it a mission to seek out Bob Dill. Bob is a custom knife maker and runs his business, Bob Dill Custom Knives, in Loveland, Colorado.

Even though we had never met, I have talked to Bob on the phone and learned we had a mutual friend of Fred Bear. I found Bob at his booth sitting behind an array of the most beautiful sculpted pieces of knife art on this planet. Bob’s knives are individually crafted. I am a knife collector and I had to goggle over every one of them before I sat down to talk with Bob. 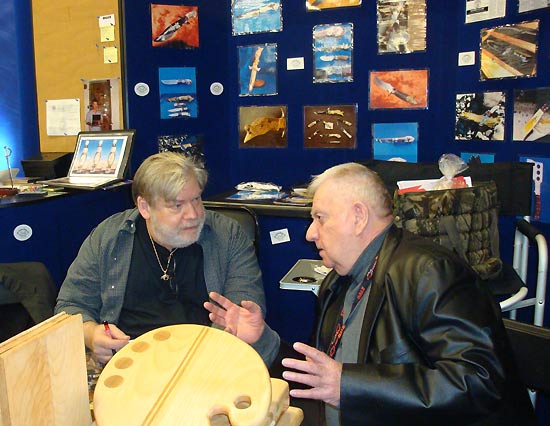 In 1984 Dill started a local NWTF chapter in Colorado. At the banquet meeting Bob met a gentleman who was a knife maker. Bob was invited to this man’s shop and given the opportunity to make a knife. Bob made two knives and found it to be an easy task. He worked with this gentleman and took an array of knives for him to the SHOT show where he sold every knife. Bob’s interest in starting his own business was sparked.

Dill was in Florida one year at the NWTF convention. A mutual friend who was a Florida game warden took Bob to Bear Archery in Gainesville, FL. and introduced him to Fred Bear. Fred spent the day with Bob and gave him a tour of the facility.

Fred gave Bob a chunk of Black Ebony wood and Bob took it home to fashion a knife for Fred Bear. Bob also made knives for then Bear Archery president Charlie Smith and vice president of sales and marketing, Joe White.

Fred Bear died on April 27, 1988. Fred went turkey hunting near Gainesville but was taken to the hospital where he died.

Dill took the custom knives he made for Smith and White to the SHOT show and presented the knives to them. That spring Bob stopped by Bear Archery to visit while he was in Florida turkey hunting. He was then asked if he would make a set of custom knives to celebrate Fred Bear’s life. Dill agreed and was commissioned to make 500 each of three different knives.

Bob made a carved stag handle Bowie knife that featured a bear carved in the handle and an inlaid turquoise bear paw print. The other two knives featured a black ebony handle and a field grade knife with an alternative ivory handle. Each knife was serial numbered 1 thru 500 and bore the likeness of Fred Bear’s signature on the blade. Also added was the dates of Fred’s year of birth and year of death, 1902-1988. The knives were a sell out and helped kick off Bob’s business.

Today Bob is busy making knives for Major league ball players. Dill uses the wood from broken game bats of the players for the knife handle. Bob has done knives for several of the players for the Chicago White Sox near my home town of Tinley Park, IL. Bob is planning on attending one of their games this year. (Bob, don’t forget to stop by Tinley and drag me along. I’ll buy the beer!) 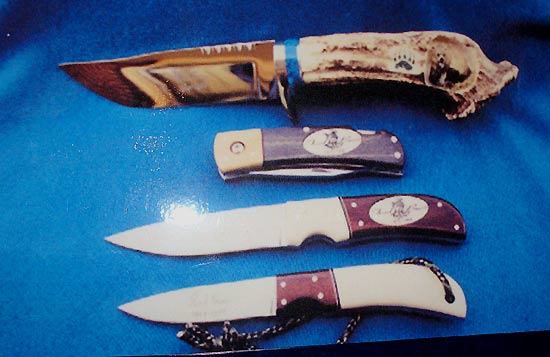 While visiting Dill’s booth, Bob pulled out a knife given to him by United States Marine Commandant General James T. Conway. Bob made a custom knife for Conway and was surprised when Conway and his entourage showed up at Bob’s booth where General Conway presented a special knife to Dill. How cool is that!

If you visit the National Wild Turkey Convention in Nashville next year, make it a point to visit Bob Dill Custom Knives. You can buy one of many knives on display or have Dill make you one of your own design. It will be an instant heirloom you will treasure the rest of your life.

Remember to hunt safe this spring and enjoy God’s awakening of this great outdoors. 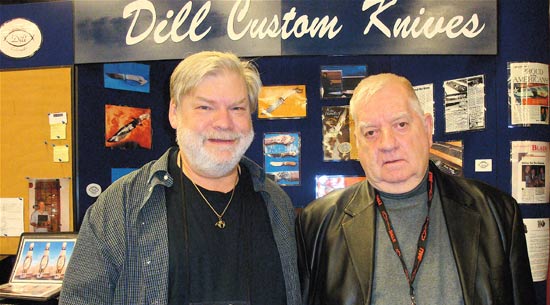 Fred Lutger and Bob Dill at the 2010 NWTF Convention in Nashville, TN.

South of the Border Whitetails

Things Happen for a Reason