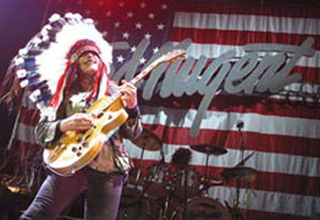 In a world increasingly hellbent on abandoning logic and its ensuing escalation of Obama madness, it is clearly time for the maximum celebration of the good old, always reliable Uncle Ted crowbar of logic.

I am ThumpMaster, hear me roar.

In the otherwise universally recognized perfection of the American experiment in self government, where evil monsters like Che Guevara and Mao Tse Tung are routinely worshipped by the very imbeciles that these historical murderers would have unhesitatingly slaughtered, to a community organizer in chief who’s terminal rookie agenda is to maniacally spend our way out of debt and drop charges against clear and present criminal black panther thugs threatening voters in Philadelphia, to black robed idiots claiming Americans have no right to self defense, where pimps, whores and welfare brats party hearty with the mindless fantasy that Fedzilla will wipe their butts eternally, ad nauseum, I am compelled to increase my crowbar swinging to new heights every day. I am the steel ballerina. Let’s dance.

It is not good enough to simply spotlight cockroaches, but ultimately all caring people must always rally to the requisite stomping party. For us varmint hunters, these are truly the good old days of a target rich environment with no bag limit. Let the stomping increase to a furious frenzy and cacophony of good over evil. May America create the splat heard round the world. My steel toed boots are giddy with anticipatory delight. Stomp on into a voting booth near you.

Since the 1960’s LSD inspired goofiness of peace and love, I have always been convinced that the gun control issue has been the tip of the culture war spear. In spite of the tsunami of global evidence from every imaginable study, source and evidence, why the peaceniks still deny the truth that more guns equal less crime is one of mankind’s greatest mysteries.

From the Nazi gun banner’s dream of herding six million defenseless Jews onto the death trains, the no guns or gunpowder allowed IRA bombings and shootemups in Bono’s Ireland, to the Idi Amin unstoppable slaughter of unarmed victims in Uganda, Mayor Daley still fails to grasp the self evident truth that gun bans and preposterous buy back programs are just what gangbangers dream of. Who doesn’t get this stuff? Liberal, dopey denial cultists, that’s who.

He resisted with every sheeplike fiber of his being that the drug wars and biker wars in Toronto were not obeying the Draconian, ultra laughable C68 gun law in his fine country. What the insane C68 has accomplish so far is to have wasted approximately six billion tax dollars and inefficiently registered a bunch of farmers’ goose guns. Phenomenally stupid.

More phenomenally stupid is the whole world’s denial of the plethora of statistics proven in John Lott’s books More Guns Less Crime, where the desirable condition of safer streets and communities with drastically reduced violent crime is accomplished most readily where more citizens not only have access to firearms, but actually carry them daily on their persons.

From the ultra safe streets of Switzerland where every household has a real honest to God full auto assault rifle and ammo on hand, and a proud national respect for their fellow citizens mind you, to the multitude of jurisdictions across America where more concealed weapons per capita are issued, violent crime not only plummets, but personal assault crimes like rape, carjacking and armed robbery actually disappear in many instances.

Could I please hear from someone who actually prefers Mayor Daley’s gun ban slaughter zones to the safe streets of armed America? You’ve got to be kidding me.

The line drawn in the American sand is very unfortunate, at times rather heartbreaking, but as long as there are people who insist on demanding policies that guarantee the continued slaughter of innocent lives, those of us who cherish life, liberty and the safe pursuit of happiness and good over paroled evil must not only stand strong and unmovable on our side of the self defense line, but we must fight diligently to either educate the soulless and braindead amongst us, or eliminate them from the debate at the voting booth.

Some things, like life, are indeed sacred, and where gun control freaks have their way, innocent lives will always pay the ultimate price. Gun free zones are a murderer’s playground. People who value life must do all we can to ban gun free zones. Join the NRA.

If you are not a member-please do yourself and your country a favor and join;
National Rifle Association