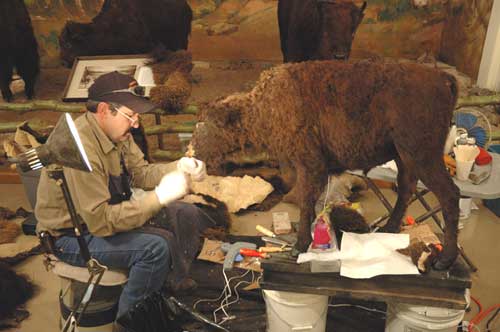 Mystery and legend surrounds the last days of the Lost Park Mountain Buffalo herd. These graceful beasts roamed beautiful green mountain valleys for many years and were a proud species that residents cherished and hunters prized. The Lost Park Buffalo ranged in the Tarryall Mountains of Colorado and were driven to extinction early in the twentieth century by poachers.

There is much debate in American terminology between bison and buffalo. The modern name for these animals and probably the more correct term based on taxonomic classification is Bison, but I will be calling the Lost Park animals buffalo because that is the term most commonly referred to locally and historically for this herd.

A significantly smaller species, a fully grown male could weigh approximately 750 pounds compared to the American Plains buffalo that could weigh up to 2000 pounds, the Lost Park buffalo were also lighter in color than their larger counterparts.

In 1882 a herd of 25 were closely watched by residents and ranchers in the Victor and Cripple Creek mining areas because their number was dwindling. The small herd was driven from that area toward Florissant and Lost Park during the gold rush in approximately 1884 by hungry miners and trophy hunters. These were some of the last of the mountain buffalo and wildlife conservation was in its infancy; at the same time the large American bison were also being hunted into near extinction.

In the early spring of 1897 a party of hunters set out in the snow and killed four of the Lost Park mountain buffalo; an older bull, young bull, cow and calf. The Bartlett brothers who were taxidermists, procured the animals and hid them away until 1901, determined to mount them and sell them for a large profit. Something changed their minds (probably fear of prosecution) and they decided not to mount them personally. When they attempted to sell the hides of the animals by advertising them in a 1901 Outdoor Life Magazine, the editor of the magazine alerted Game Warden Harris who found the hides in Buena Vista, Colorado in the basement at the home of Charles Bartlett. An arrest was made and a subsequent trial held where the judge dismissed the case due to a technicality in the law, much to the dismay of the warden and the rest of the prosecution team.

An auction in 1901 awarded the bison hides to Mr. Peter Mulock who paid $1085.00 for the four hides and then sent them to taxidermist Mr J.C. Miles of 1742 Broadway in Denver, Colorado for mounting. Not much is known of the buffalo for the next 28 years, but when the Canon City Municipal building was built in 1928, famed big game hunter and conservationist Dall DeWeese donated his extensive animal collection to the second story of the building for a museum and began negotiations with Mr. Mulock to acquire the buffalo. They were installed into the museum with donations provided by many of the residents of Canon City. A May 28, 1928 Canon City Daily Record article reported that a fund drive was being organized canvassing each neighborhood to raise the money to purchase the buffalo and other museum equipment. The article reported, “The matter cannot fail to commend itself to all public-spirited people of the community in view of its value as a civic and educational investment.” the article went on to say”There is hardly a man woman or child in Canon City that cannot afford a contribution.”

The Lost Park Buffalo Herd newly mounted as they appeared in front of the Taxidermy studio of J.C. Miles at 1742 Broadway in Denver circa 1901.

A grand mural featuring the surrounding mountains of the region was painted as a backdrop by world renowned artist Robert Wesley Amick who was in residence in Canon City at the time.

The Lost Park herd as they appeared after being installed in the newly built museum circa 1928. In the background is the beautiful mural painted by world renowned artist Robert Wesley Amick.

Fast forward the history of these remarkable buffalo to 2010. The Canon City Municipal Building is now called the Royal Gorge Regional Museum and History Center and the buffalo are in a severely deteriorated state from years of display and swamp coolers. The staff and museum supporters in the community hosted several fund raising events including a special buffalo steak dinner at a local restaurant to fund the much needed restorations. The Fremont/Custer Historical Society donated a large amount to the project and a large donation from Robert Wesley Amick art collector Roy Coffey of Texas was secured because of the connection to the artist.

Wildlife artist and taxidermy historian Jerry Vinnola owner of Big Timber South Taxidermy Studio and The Colorado Institute of Taxidermy Inc. was approached over two years ago by the Royal Gorge Regional Museum and History Center’s curator Cliff Hight to see if he would be interested in restoring the buffalo. Jerry has restored many historical pieces including a magnificent Kudu shot by Theodore Roosevelt for a private collector. He began stocking buffalo parts to prepare for the job.

After carefully looking at the buffalo and taking stock of the extensive damage, Jerry decided to give the restoration his very capable attention in January 2010. He gave an estimate for completion but cautioned there was no way to know the true extent of the project until he actually got into the repairs. A taxidermist traveling through the area in the 1940’s had made some “repairs” to the buffalo, but used poor techniques and materials causing more damage.

When Jerry began he began with the calf because it had the most damage and would take the most time. Sad and seemingly hopeless the little calf was cracked in numerous places, missing its ears with much of its face peeling off. The legs were split and underneath the hide the plaster and the paper mache’ cracked and turned to powder.

The forlorn, cracked and disintegrating baby buffalo before its restoration.

Painstakingly, Jerry worked inch by inch on the little buffalo finding surprises from the previous repair work such as badger, mink, coyote and horse hair used. In several places the buffalo were shaved by the previous taxidermist in order to move the hair to thin areas, resulting in a mottled, mangy appearance. They were dyed black in many places contrary to their natural color, perhaps either to help hide imperfections or due to ignorance of their true color.

One of the problems of the restoration was the fact that this is an extinct species and it is important to keep as much of the original mount intact. It took hours and hours to chip off the old glue and try to preserve the hair without breaking it off. He then used buffalo hair to patch the hides cutting it to size. He even cleverly recreated the ears and eyelashes of the baby.

Mr. Vinnola takes his work on these buffalo very seriously and is doing an amazing job preserving the last of the magnificent Lost Park buffalo from Colorado.

The baby mountain buffalo finally finished and ready to go back on display.

The Royal Gorge Regional Museum and History Center hosted a party for the community to view the progress of the restoration. Many area visitors come to watch the progress and talk to Jerry as he works. He is proud to be educating the people he meets and is a veritable fountain of knowledge about wildlife.
The Lost Park Buffalo herd looks wonderful today and when the project is completed in the weeks ahead, the Royal Gorge Regional Museum and History Center will once again have a grand showpiece for the residents of Canon City, Colorado to proudly show to the world.

It is important to Mr. Vinnola to be able to teach young and old alike about wildlife and he is making plans to open a museum for the blind where they can see and touch all animals.

Make plans this summer to visit Canon City and see what became of some of the last Lost Park buffalo.

Scouting For Deer – Setting Up

Food Plots Made Easy on a Small Budget