by Justin Medina
in Bowhunting Posts
0 0
A A
1 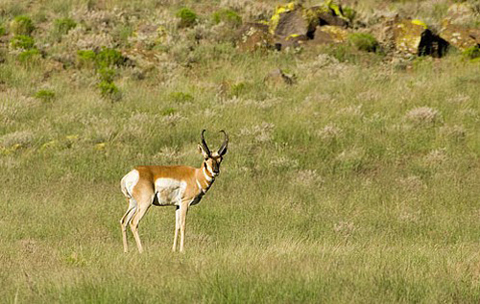 A mature antelope is an impressive sight, with his beautiful color markings and pronged horns.

There he was, standing eyeing my water hole where I was waiting hoping he would get thirsty enough to let his guard down and come in.  It was a hot august day and I had been in the blind all day battling 100-degree temperatures. I was almost to the point of calling it quits for the day when a group of pronghorns appeared on the open horizon.

Nervously, I waited hoping that they would continue in my direction toward the water hole.  Minutes dragged by like hours and finally the group of antelope made their way to the water hole.  The buck being the first to the irresistible water now stood 38 yards from me as I came to full draw with my BowTech Admiral.  I settled my pin right behind his shoulder and released.  Thump! My Victory arrow passed through the buck and he immediately wheeled and exploded, nose toward the distant hills. He made it about 30 yards when he crashed.  I raced out of my blind filled with overwhelming excitement and as I approached my antelope I was thrilled to have my buck but also relieve that I didn’t have to spend another day in that scorching blind.

That was an antelope hunt that I will never forget and was also the hunt that got me hooked on antelope hunting.  Antelope are truly a unique animal and every bowhunter should get the opportunity to harvest this beautiful animal.  From their color markings of white, tan and black to their unique shaped horns (that actually shed every year). Then throw in the amazing speeds that they achieve make the antelope a superb trophy and challenge for any bowhunter.

Antelope can be found throughout the western states with high numbers being found in Wyoming, Montana, Colorado and my home state of New Mexico.  Tags are usually easy to draw and outfitted hunts are usually a lot more affordable than elk or deer hunts.  And if you want to do a DIY hunt I have some suggestions on how to make your hunt a successful one.

Since antelope inhabit vast open dry prairies their only source of water is usually in the form of water tanks, holes or cattle troughs and they need water every day.  Some of these can be as easy to find as looking at maps that point out windmills and dirt tanks.  However, remember that scouting ahead of time and finding water holes that are not on the map and looking for tracks that show antelope actively using a certain water source will give you a better idea of which water you want to spend most of your time sitting.

Game cameras are also very useful for this, but if you don’t have them, I like to find a hill or some vantage point that overlooks several water sources and sit with a good set of binoculars glassing the water holes that are visible from that point.  This gives me the ability see what’s coming in to the different waters at the same time but also lets me see where the antelope originate from and how they approach the water.  Usually they will approach from the same area and this helps give me an idea of where I want to set my blind.

Once you have found the most active water, its time to set a blind.  I like to set the blind between 20-35 yards from farthest water edge depending on what cover I have.  Most of the time there is no cover, but don’t prevent that from setting a blind.  If there is no cover I usually set the blind out about 30 yards.  Now it may look like the blind stands out and you may think the antelope will see it and not come in, but trust me this is not the case.  More times than not antelope will not be bothered by the setting of the blind and have even seen where a blind was set up with no cover only to see an antelope walk within feet of the blind an hour later.  One thing you do want to do is get four barbed wire fence posts and a make a small fence around your blind with two rows of barbed wire around it, this is essential to keep cattle out of your blind and trampling it to pieces, trust me I have had a friend who set a blind without fencing it and when he went back to sit it the next day, there was no blind.

Another set up that often gets overlooked is setting a blind near an open or broken fence.  Since antelope do not jump fences, try to find a place were antelope are crossing through a broken fence.  If you do, you might want to consider setting a blind there as you can bet they will cross there again. When hunting public land where you must compete with other hunters for water holes it might be easier to set a blind near a fence crossing where there is no hunter competition.  I would also switch to sitting from a water hole to fence crossing when rain makes water holes inactive.

Once you have your setup, the game of patience begins so make sure to bring plenty of water and super comfortable seat if you plan to hunt all day.

If sitting isn’t your thing or rain makes water holes inactive, you can try a decoy method.  This method works really well during the rut and the idea is to use a small buck decoy to hide behind and then slowly move toward a dominate buck with a group of does.  The dominant bucks become territorial and often charge at the decoy trying to scare it off.  Depending on the antelope this method will sometime bring them in real close or you might be offered shots out to 60 yards.  I have mixed feelings about this method due to the fact that here in New Mexico our archery antelope season doesn’t really fall into heavy rut and I haven’t had much success with antelope coming in close when using the decoy method. However during muzzleloader and even rifle hunts pulling out a decoy will make antelope go crazy.  So I guess it all depends on location and time of rut for best success using this method.

There is however another decoy method that I still have yet to try and that is using a cow decoy to close the distance.  Montana Decoys makes the Moo Cow and there isA new one on the market is the Zebu Cow Blind from Outfoxed Products. Sounds crazy but think about it, antelope are usually found in and around cattle so they are use to their presence.  I have even seen antelope bedding right next to cattle as well as walking right through a herd.  So the idea of using a cow decoy makes sense and I would definitely consider using it.

The last method is also the simplest, spot and stalk.  Gear that I recommend for this type of hunting is a set of kneepads, heavy-duty leather gloves and excellent camouflage.  The first thing you are obviously going to want to do is spot your game.  Having a good set of binoculars and finding a high vantage point overlooking lots of terrain is the key.  Once you have found the antelope you want to go after, it is time to plan a route that will not only give you the most cover but also put you within shooting distance.

Make sure you know how many antelope are with the one you are stalking so you don’t accidentally spook them when stalking your intended target.  Also avoid any route that might involve stalking by cows, funny as it sounds I have stalked on antelope only to get busted by cows that were curious of what was crawling by them and the antelope tend to sense when cows are on to something.  Since most of the terrain you will be stalking in is flat with little to no cover you will probably spend most of the stalk crawling and that’s why you want a good set of kneepads and gloves to protect from hot ground and stickers.  Also you want to be careful when crawling, rattlesnakes also inhabit this country and you wouldn’t want to come face to face with one of those.

Stalking takes a lot of time and skill to close the distance.  Make sure you play the wind right and use any arroyos, sage brush or other obstacles that can hide you from the great eyes of the pronghorn antelope. Also remember it is easier to stalk a lonely buck than a group.

I hope these strategies will help you become successful on your next antelope hunt.  Not only are these animals fun to hunt and make a great addition to any trophy room they also make a great table fare.

Own the Zone TV Joins BHN

The Hunt Really Begins at Home