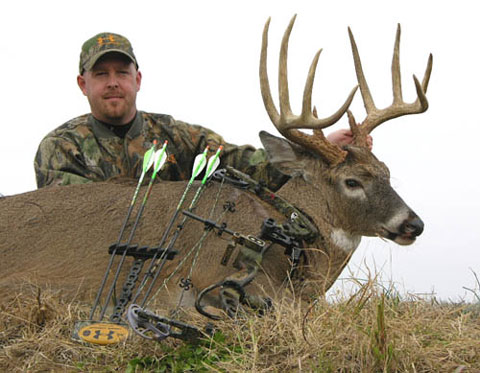 This mature buck had all his senses fooled and came within 16 yards of the author’s stand during a pre-rut hunt.

Without a doubt, the immediate pre-rut is my choice as the most fun time to bowhunt whitetail bucks. At this point in the breeding cycle, bucks are on their feet looking for those does that come into estrous a little early, and competition can be keen. It is at this time of year that archers can use scents, rattling, grunting, and decoying with great effectiveness, and that is just plain fun!

The pre-rut may vary with location. In the Midwest, it is usually in late October and early November. In Texas, it may be in late November to early December, and in the Deep South, it may occur in late December into January. A hunter must keep up with the breeding cycle in his area, but once bucks are on their feet and start looking, it is time to get in a treestand and take action.

As mentioned using scents, calls and decoys at this time is a great way to bring a buck in to your setup, and my favorite pre-rut tactic is to use all of them in unison. My goal is to fool three of deer’s senses, and to do that you must combine the three “stimuli”.

I love to decoy deer, and I generally set up my Primos Scarface buck decoy in an open area within easy bow range. I prefer a small buck decoy during pre-rut (though during the peak rut I often use a small buck and doe decoy together). Mature bucks don’t tolerate the small guys very well at this time of year, so the buck deke is best.

I want to make sure the decoy is in the open for a couple of reasons. First, I want it where it can be seen from a good distance, so it may visually draw in a big buck from way out, and secondly, if deer do see it from a distance, it will not surprise or scare them. Decoys in the woods or in tight quarters where a buck sees a decoy for the first time at 15 yards can certainly spook him.

During pre-rut, I like to put a scent pad or a piece of a paper towel on my decoy’s tail and give it an ample dose of buck urine. (the paper towel will move a bit in the wind and looks like a deer flicking it’s tail. This further authenticates my decoy. He now looks and smells like a real buck. I also put scent around the decoy, and if I can find a scrape or heavily used trail at the edge of the field I am hunting, I put plenty of buck scent there as well.

When you set your decoy up, remember that a buck is likely to come in to confront your smaller buck head on, so you want to angle your decoy to position the real deer for a good broadside or quartering away shot. This is another advantage of using a decoy. You really can position your target for an optimum shot.

So now I have a real smelling decoy out in front of my treestand. This is great if a buck just cruises by, but at this time of year, I want to try to make something happen. About every 20 minutes, I like to rattle and grunt, and I will keep this up as long as I am in the field. Last year I used PRIMOS Buck Roar grunt call and it became my new favorite. With very little air pressure I got lots of volume, and it allows you to grunt on inhale and exhale and simulate a buck “hyperventilating” as when they are really excited.

So now I am using all three strategies and turning them into one. What I am trying to simulate is two bucks fighting (theoretically over a doe).

A couple seasons back, my three pronged approach worked to perfection on an early November hunt. I setup on the edge of a field adjoining a stand of oaks, and there were rubs and scrapes all along the edge. I put out my buck decoy and scented him up. I also put some buck scent in a couple of scrapes and on some rubs as well. Then I began by rattling and grunting. The buck heard me, so I fooled his ears. If a mature buck responds to calls, he will almost always circle downwind. When my buck got downwind, he scent checked the situation. I had my Code Blue buck urine out, so he confirmed with his nose what he heard. Then he approached my setup and saw my buck decoy, so he visually reconfirmed what he heard and smelled. He waltzed right in, and I sent a Rage tipped Carbon Express right through his boiler room. In my book, there is no more fun way to kill a deer.

There are two key things to remember when utilizing this system. First, make sure your deer are in pre-rut. This is an aggressive and invasive tactic, and you don’t want to use it and pressure your area if the time is not optimum. Secondly, as stated above, remember to put your decoy in a highly visible location. Surprising decoy with a deer at close quarters can completely ruin your hunt that was otherwise going well.

Whether October in Iowa or January in Alabama, get out there and hunt the pre-rut. You can aggressively pursue whitetail bucks and make something happen with calls, decoys and scents. It is not the time of year to just sit and wait if you want to maximize your opportunities, so go after that buck of your dreams with all the tools available.

Pulling the Trigger on Scent