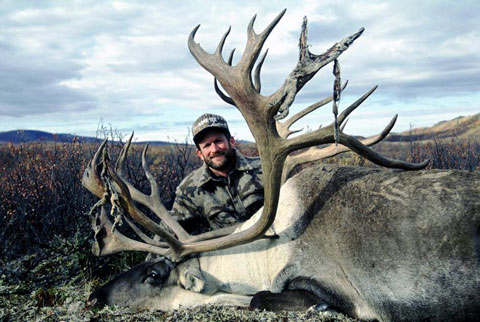 A gift from the gods, my largest Alaska caribou ever, gross-scoring 409 P&Y points.

September and October are a magical time in the Far North. The endless days of summer are rapidly shortening, the air has a decided nip long about sundown, the nagging insects are mostly gone. Salmon runs that choked the coastal rivers and streams have run their course, and most of the big bears that gorge on them all summer long are heading for higher ground, where ripe berries still offer plenty of calories before their long winter’s sleep.

For hunters, it is the time of the caribou as the herds move across the foothills and the brilliantly-hued tundra, heading for the areas where they’ll endure another tough winter.

If you have never seen a caribou migration firsthand, it is hard to describe it to you. One bright and sunny late September day I was flying in a Piper Supercub in northwestern Alaska, following a winding river that stretched as far as the eye could see. In the three hours we were airborne that morning we were never out of sight of caribou. The herd was lined out for over a hundred miles. There were cows and calves and bulls of all sizes; oak-colored antlers glinted in the sun literally everywhere. I felt as though I was soaring like an eagle.

On another occasion my buddy Mike and I found a large herd of caribou moving through a river valley. We must have seen more than a thousand animals, and we knew where they were heading. We landed his cub on a dry lake bed about 20 miles ahead of the herd, pitched our tent, and got ready for the next day’s hunt.

The next morning at dawn there was frost on the tent and we could see our breathe as we lay in our sleeping bags, milking an extra few minutes of toasty warmth before getting started. Then we heard them. Caribou make a sort of clacking sound as they walk, their double-jointed knees sounding almost like someone pounding empty coconut shells together. Unzipping the tent fly we peeked out and were terrified – the herd was walking right underneath the wing of Mike’s airplane! Holy smokes!! What if one accidentally put an antler through the wing fabric how would we ever get out of there? So we jumped up and, in long johns and sock feet, ran out and shooed them away.

Once we got dressed and our gear sorted out, we spent the day watching caribou come past us in a three mile-wide swath until the sun went down. Sometime mid-afternoon, after passing up a bunch of really good bulls He came along, and I made my move. Two hours later, after anticipating his line if march and setting up I was in position and my arrow drilled him. That bull green-scored 409 Pope & Young points, my largest ever with a bow.

The thing about trying to anticipate the movement of a caribou is, I do not think they have any clue where they are going themselves. One minute they’ll be sauntering through with not a care in the world and you think you have it all dialed in. Then, the next thing you know something spooked them – a songbird? Their own shadow? Who knows? – and they’re off to the races, running like the wind first one direction, then reversing course and heading right back the way they came.

About the only cardinal rule of stalking a caribou is, if he has a head start on you, even if he is walking you’ll never catch up to him. That’s why it is always better to let them come to you.

While I have done most of my caribou hunting in Alaska, I have also pursued them across Canada. My last caribou hunt occurred in Quebec in 2007, when a small group of us struggled with blow-the-chimney-off-the-roof winds and no migration. We managed to kill bulls, but it was a grinder, the kind of hunt that occurs often in caribou country. That’s because with a herd animal that is constantly on the move, it is either feast or famine. When there are lots of them the hunting is surreal. When there are not many of them, it can be pretty lonely.

Caribou hunting will also test your skills as a bowman. Here the wind is an almost constant companion, the kind of wind that will shake your bow arm as you aim and push your arrows off course if you’re not careful. In the open tundra, where creeping in close can be very difficult, shots can also stretch out to the limits of your own personal maximum effective range (MESR). The animals themselves are not nearly as tenacious to life as an elk or even a big whitetail buck, but you have to place that broadhead in the boiler room. Hit them anyplace else and the chase will be on, often with less than desirable results.

Why caribou do not get the same respect as, say, a moose, has always baffled me. Maybe it’s because there are so many of them (in Alaska the total population is estimated to be nearly one million animals), and in good country at the right time they are not all that difficult to find. But those magnificent antlers, the spectacular white-mane cape, that delicious meat! Combine that with the Far North in the fall, when the colors are a kaleidoscope of brilliance, the snows are beginning to cap the tallest peaks, and you can climb up on a hill to glass and see the ends of the earth, and you have an adventure truly worth every effort.

Try it sometime, and you’ll see what I mean.