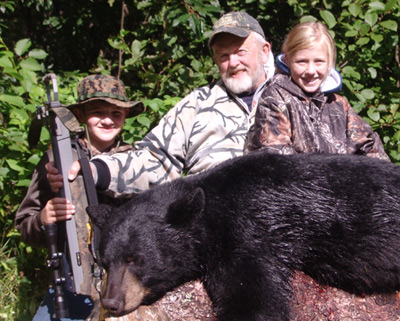 Bob Neff drove up yesterday from Kellerville, Illinois with his two grand kids Tucker and Sarah and his son Rob and daughter Joelle.

After arriving in camp they sat stands and got set up to hunt. Bob and Rob had set up an extra stand on every hunting site for the grand kids. Every year Bob brings up two of his grand kids so they can experience the hunt and outdoor adventure of Canada.

This morning Chef Klaus made stuffed pancakes with bananas and chocolate chips. After eating breakfast Bob and crew checked their baits, all of them were hit.

We ate our main meal of the day at 2:00pm; new york strip steaks, baked potato and sweet corn on the cob. Then we all went out to hunt.It was overcast and chilly.

Rob’s bait was hit so he re-baited it. Then he and his grandson Tucker got in their treestands. Before long a rain storm blew in.

When the rain storm stopped a bear came up. Bob got ready to take a shot but a stump or some twigs were alway in the way. The bear kept looking into the woods and then it ran off.

Another bear came up. Bob was ready. It took a while for the bear to be at good shot angle and Bob took his shot. It was a good hit. The bear raced into the woods and Rob and Tucker heard a nearby crash and the bear’s death morn.

Bob stayed in the stand to see if he would see any more bear and a third bear showed up. 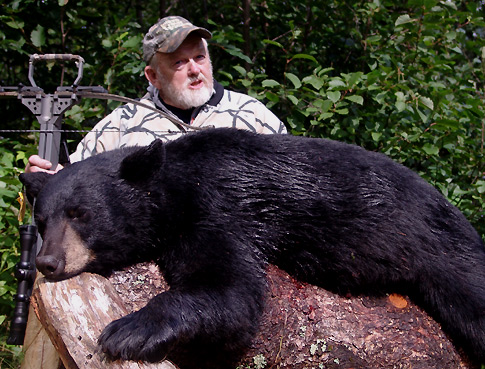 Bob McNeff has hunted bears with Fred Lutger for several years and taken several bears. He and his son Rob own Wells Creek Outfitters in Clayton, Illinois. They have trophy buck bowhunts in Pike and Adams counties in the Illinois Golden Triangle.