by Robert Hoague
in Bear, Bowhunting Blog
0 0
A A
2 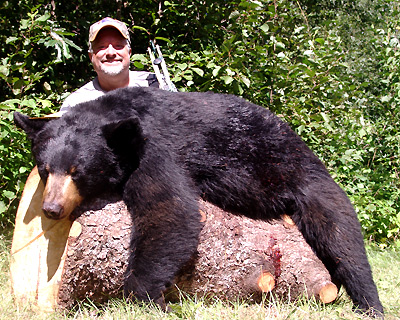 Robbie Cramer is hunting a stand site Fred calls “Caution.” It has a Double Bull ground blind 15 yards from the bait logs. On yesterday’s hunt Robbie saw a glimpse of a bear in the woods behind the bait logs. 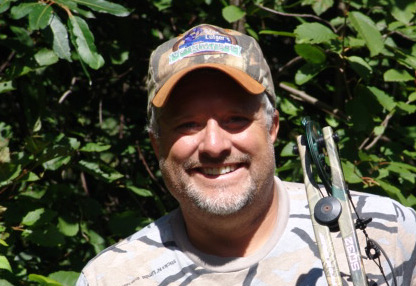 Today the mosquitoes were so bad Robbie started his ThermaCELL in the truck before he went in to hunt. The bait was hit and he re-baited and covered it with the bait logs. He left the bait bucket next to the logs and got inside the grund blind and got set up to hunt.

Nothing happened until late afternoon. Robbie caught a glimpse of a bear walking through the brush 10 yards from him. The bear walked out of the woods on the right and stopped 3 yards from the blind and looked around briefly. Robbie could tell that the bear was not checking out the blind and was interested in the bait.

The bear took a few steps toward the bait and stopped again. Robbie put his release on his bowstring so he could draw if the opportunity came. The bear stuck its nose up in the air and moved his head back and forth, smelling. Then it put its head down and walked to the bait logs and grabbed the bait bucket in its jaws and picked it up.

At this point the bear was a perfect quartering away.

Robbie drew and shot the bear. It ran into the woods to the left and Robbie heard brush crash and a death moan. When Robbie checked the hit area he saw lots of blood and his arrow was on the ground and showed signs of a good hit. He walked out to the woods road and waited for Chef Klaus to pick him up. They went to pick up Fred and me. Fred had shot a bear too and he decided we would recover both bears in the morning.

Robbie’s bear went only 30 yards and we found it quickly. Here he is with the bear. 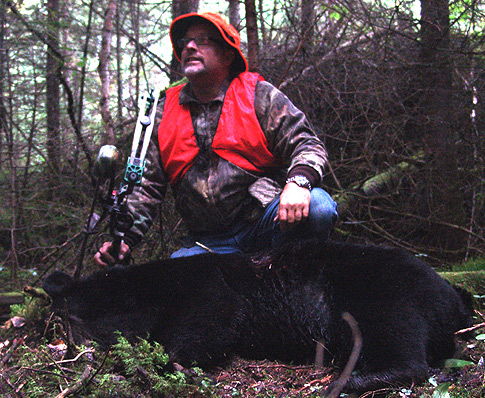 And here is a picture of the bear at our place by the camp where we take pictures of the hunters and their bears. 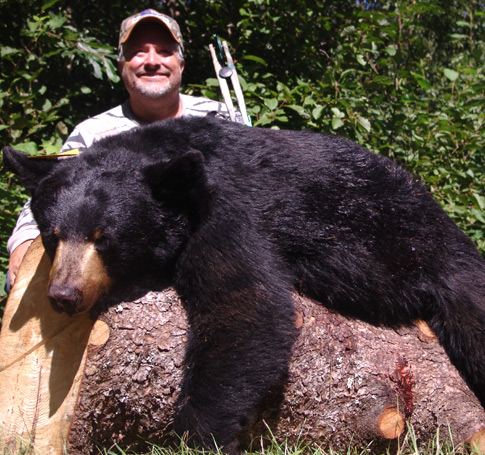 This is Robbie Cramer’s second trip to Fred’s bear camp and his second bear. Robbie is from Fort Worth, Texas and is a native Texan. For the last 30 years he has been in the direct mailing business. From the beginning of Bowhunting.net in 1996 Robbie has been one of the featured bowhunters in numerous online bowhunts over the years.