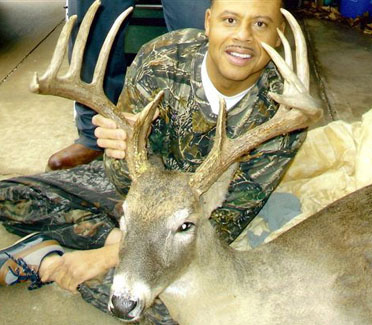 Edmonds Billie Willis loves to hunt deer, although getting himself into the woods can be a challenge. A motorcycle accident in 1981 left Willis paralyzed from the chest down; as a result, the automobile salesman must rely on a wheelchair for mobility.

Growing up in Watonga, Willis was drawn to motorcycles as a teenager. “I just loved the speed and handling of a motorcycle, “he said. “My parents didn’t want me riding a motorcycle because they were afraid that I would get hurt, but I thought I knew more than they did”.

On a warm day in May 1981, Willis was riding his motorcycle to El Reno when the unthinkable happened. While riding at high speed, Willis lost control of his cycle and was thrown 70 feet. “I landed on my butt, but the impact bent my upper body forward, snapping my spine just below my shoulders,” he said. Minutes later an ambulance transported a badly damaged Willis to the hospital.

Lucky to be alive, Willis listened as the doctor told him that if the break had been 2 inches higher, he would have been left a quadriplegic. Billie was hospitalized for six weeks, and then spent six months in the rehabilitation hospital.

Paralyzed from the chest down, Willis worked hard to regain as much mobility as possible. He bench presses 415 pounds and has done 1,000 pushups in one day. He’s learned to drive a specially equipped car. “God told me that just because I can’t walk doesn’t mean that I can’t have a second chance at life,” he said.

In 1989, Willis was determined to resume deer hunting and bought a crossbow. It wasn’t until Christmas day in 1994 that Willis scored on his first buck. He had received a non-ambulatory permit allowing him to hum from a stationary vehicle.

“I remember I was supposed to be home wrapping Christmas gifts, but I decided to go hunting,” Willis recalled. “My wife wasn’t too happy that I was going alone, but I convinced her that I would be all right.”

Willis drove to his hunting area, turned off the engine and began waiting on deer to come out to feed. Soon, a buck appeared 20 yards away, presenting Willis with a perfect broadside shot. At the shot, the buck traveled only 15 yards.

“I was so shocked,” Willis recalled. “When I saw the 7-point buck fall, I said ‘I got it’ and then I called my brother-in-law, Derek, to come help me.”

Last fall, to his delight, Willis learned that his cousin, Larry, had a 40-acre farm in Logan County that was home to some nice bucks. On his first trip to his cousin’s place Willis saw nothing but had his hopes boosted after seeing pictures of big bucks on a game camera.

Last Christmas, Willis decided to go on an afternoon hunt accompanied by Tony Moss, a co-worker at the automobile dealership. Moss helped Willis settle into a cedar tree that would serve as a blind, and then cut some cedar boughs to camouflage the hunter’s wheelchair. Moss then drove Willis’s car to a nearby barn to wait.

For 2 ½ hours, Billie saw nothing but knew the game camera’s time stamp confirmed the big buck was feeding just before 6 p.m. With light beginning to fade, he prayed for a chance at the big buck and then caught sight of movement in the woods 50 yards away.

A big buck appeared and walked toward the feeder stopping at 35 yards. Willis began to shake as he settled the cross hairs of his crossbow on the biggest buck he had ever seen.

“I remembered that my dad always said to take a deep breath and relax when you get buck fever,” recalled Willis. “I shot and the bolt appeared to miss the buck and ricochet off to the right. I picked up my cell phone and call my brother Kevin and said, “I missed the big buck.”

Moss drove down to pick up the hunter and found the expended bolt drenched in blood. Seventy yards away lay the big buck, dead from a perfect shot. Willis was overcome with emotion as he wheeled himself over to survey his harvest.

“I had tears in my eyes,” he said. “I thanked God for my good fortune.” You know its all about having faith in God, and believing in yourself.”

Willis’ buck sported 13 points on a heavy rack that was estimated to score near 170.

In the future, Willis hopes to become a motivational speaker. He also has aspirations of tagging another big buck on his cousin’s farm. Chances are good he’ll do it too!

In the Cool of the Night