Doubler From the Double Bull 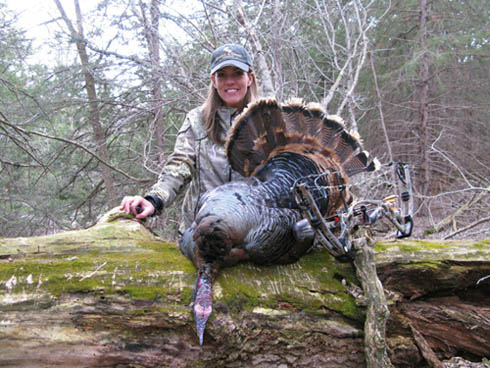 Author with her first bowkilled Merriam's.

The crisp morning air was charged with the sounds of spring turkeys.  From the blind’s pitch-black interior, the calls from a dozen longbeards could be heard echoing throughout the canyon.  Sitting in complete darkness, my senses were heightened and my anticipation grew with every amplified gobble.

The eerie feeling of sitting alone in the dark woods was something that I have grown accustomed to from many years of bow hunting whitetail deer. But this hunt was different in many ways.  Not only was I pursuing turkey from a ground blind but for the first time in two decades of hunting, I had company in the form of a cameraman.    With only the dim glow from our headlamps, we each got situated for our perspective shots.

I had hopes of capturing my first bow hunt for turkey on film among the hills of Nebraska, home to the beautiful Merriam turkey.  I’ve had success with my bow over the last 17 years of deer hunting but only recently did I discover the allure of turkey hunting. Luck has definitely been a friend of mine in the woods of Wisconsin. Three years ago my first attempt at a Wisconsin Eastern turkey proved triumphant.  There’s nothing like dropping the hammer on the old 12 gauge within the first 30 minutes of light.

When the exact same scenario occurred during my second spring season opener I thought, “Wow.  Turkey hunting’s a piece of cake!”.  My luck ran dry however when my third year went by without the slightest glimpse of a bird.  So when a friend of mine extended the invitation for a filmed hunt at the Gobble-N-Grunt Outfitters in Nebraska, I couldn’t let the 9 hour car ride stand in my way.

Shadows began to appear as the morning light made it’s way into the canyon.  We were situated in a Double Bull Blind on the edge of a creek bottom.  Protected by the rolling hills, we were confident that, despite the forecasted windy day, the turkeys would be using our front yard as their strut zone.  After spending the previous evening scouting out this area, we knew that we had set up camp close to their roosts.   Cameraman Jim Kinsey, a professional videographer and the Director of Photography for the Magnum Hunt Club, was ready for any scenario that might come our way.  By using a high-end microphone, Jim could pick up sounds inaudible to the naked ear as he listened to the first of many birds pitch down.

With our realistic Hazel Creek hen decoy positioned in front of the blind, I got excited as our first visitor appeared.  A bearded hen walked through and found our decoy interesting as she paraded around ‘Hazel’  in circles, making a cooing noise.  At the same time, we spotted a bird in full strut coming in from our left.  My heart began to race as I clipped on my Tru-Fire release and got into position. Just then I heard the whisper, “Stand down.  It’s only a Jake.”  The young bird, seemingly curious, came trotting in. Jim recognized his two slightly shorter tail feathers, a sure sign of youth.  We watched the Jake contemplate his next move.  After a ten minutes stay, he finally decided she just wasn’t his type.

An hour of light had passed and a few distant gobbles could still be heard.  We tried some attempts on the slate call but the woods had quieted down from the earlier concert.  The wind had picked up, possibly causing the Longbeards to hunker down.  Another lone hen waltzed in to check out the competition.  She stood right next to the decoy preening her feathers.  Loosing interest, she eventually meandered off toward the creek bottom.

It was around 10:00 am when I looked over at Jim behind the camera.  He quickly flew upright in his chair and put his hand on his headset, signaling something exciting.  “Get ready!  I hear drumming!”   Jim peeked out his side of the blind only to see a big Tom along side a hen about 30 yards away.  Being positioned on the left side of the blind, I couldn’t see in that direction but the look on Jim’s face said enough.  This was the one.  With the camera rolling, I pulled back my new Hoyt Kobalt in hopes of the big bird presenting a shot.  Suddenly, there he was in full strut, dragging his wing tips on the ground and drumming up a storm.  My heart was pounding strong as I had never seen a longbeard in full strutt that close before.   Just then a big gust of wind blew up the dust around the old bird and I let my Rage broadhead fly.   We heard to the thud of the arrow and saw feathers fly as he flew up and made a big loop landing 30 yards away by a downfall.  “You got him! We got him!” Jim exclaimed as I sat shaking as if a Pope&Young whitetail just dropped under my stand.

The excitement I felt was obvious as my bow bounced on my knee from sheer adrenaline.  “Are you sure he’s down?  I’ve heard turkeys are really resilient!  Are you sure I got him good?” were all exclamations caught on tape.  The Tom was down but we gave him a few minutes to prevent a last, ditch effort escape on his part.  Upon further inspection, my first turkey bow kill was not only a beautiful Merriam hybrid but an old one at that.  He sported a nice, full beard and long, sharp spurs.   I could not have been more excited but we didn’t have much time to celebrate as more gobbles rang out close to our position.

It was my turn to hop behind the camera in hopes of capturing a double kill on film.  With a turkey tag burning a hole in his pocket, Jim gave me a few quick lessons on the video camera as we traded seats.  I knew there were numerous birds still in our area but would a shot present itself?  That was the question!

An hour had passed with little action.  The only calls we heard were from inside the blind, as the slate and box call produced no response.  We agreed that a nice, hot lunch back at camp sounded inviting so we stood up, getting ready to head out.  At that very moment the sounds of fighting longbeards could be heard off to our immediate right.  Like two kids playing musical chairs, we flew back down in our seats and scrambled to prepare for a showdown.  From a slit in the blind, I could see a group of five Toms headed toward us through the woods.  It was apparent that they were not going to pass right in front of the blind but if they came out into another opening, Jim would have a 25 yard shot.  He pulled back his bow and I focused the camera at the opening just as two Toms stepped out.  The arrow flew straight striking the second bird plum center.   He ran a few yards showing signs of a mortal hit, disappearing into the creek bottom and out of our sight.

“Follow me!” Jim leapt from the blind with his bow in tow.  The Rage expandable broadhead performed to perfection as we recovered the marinated arrow at the scene of the crime.  Standing on the ridge, we scanned the woods for his downed bird.

Suddenly sounds of a brutal fight broke out across the creek.  I was unaware that when a longbeard is wounded, the other competing Toms will commence an attack and finish the kill.  We raced down the ridge, through the creek and up the other side as huge pine limbs slapped us in the face. 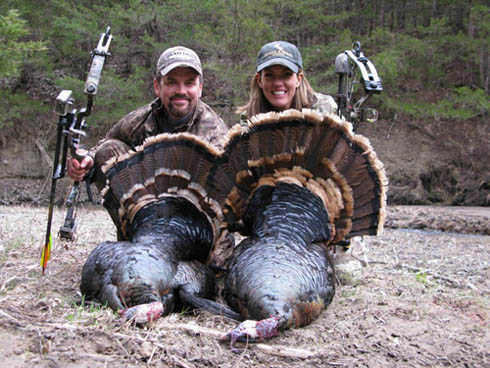 Jim Kinsey of the Magnum Hunt Club and Jana are all smiles with their Double.

We followed the sounds of the battle, belly crawling under the pines trying to get close enough to assess the situation.  Nocking another arrow, Jim stood up and drew back.  He spotted his bird laying on the ground as the other Toms paraded around the body.  The deal was sealed as the second arrow struck, scattering the attacking gang.  Upon closer inspection of Jim’s bird, it turned out the nail in the coffin was actually the first arrow, causing a mortal wound in his chest.  After catching our breath and many high fives, we headed back to the blind to grab my longbeard and take some pictures of our successful morning.

Pulling up to camp, our big smiles spoke for themselves.  We had successfully gotten our “double” and shared our morning’s hunt over a fantastic home cooked lunch.  According to James Brion, owner of Gobble-N-Grunt Outfitters, my longbeard was a 4.5 year old bird and the oldest Tom taken so far that season.  His spurs measured 1.25 inches.

There are so many times when the shot just doesn’t present itself or the weather interferes with a hunt.  As all hunters know, it rarely happens as one might think it should.  I love the unpredictability of hunting but when it all comes together like it did that Nebraska morning, I couldn’t feel more grateful as luck was on my side once again!  And to be able to relive that amazing ‘doubler’ hunt while watching it on video makes it all the more exciting.

I replayed every minute of the hunt in my mind on the nine hour drive back to Wisconsin.  In my window’s reflection a big smile reflected back at me as I pictured the necklace I wanted to make from the impressive spurs I collected.  I laughed out loud while replaying images in my mind’s eye of belly crawling under thick pine trees trying to avoid loosing Jim’s bird.  To think I almost didn’t go because of the long drive also made me laugh.  Rest assured, I am already marking my calendar for next year. 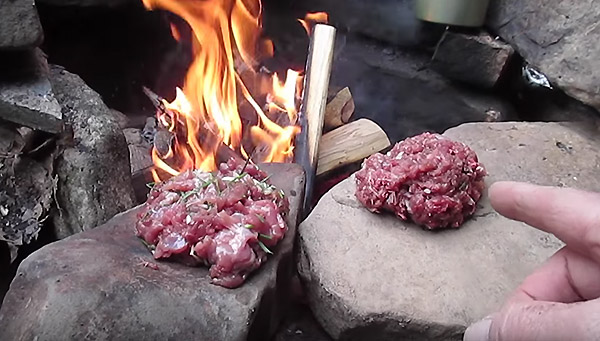 HOW TO CAMPFIRE COOK SQUIRREL