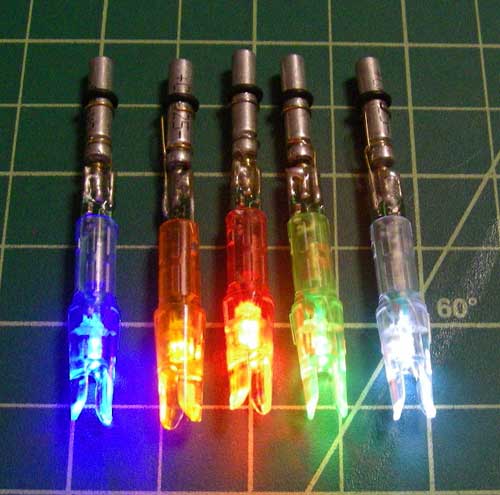 I was recently involved in some product testing for Firenock and thought I would share my results with you guys. Below is all of the info from the test.

I recently purchased three different nocks to try the Firenock challenge. The nocks I have chosen are Firenock, Nocturnal and the Carbon Express Lazer Eye. I will be shooting each nock up to 100 times into a redhead broadhead multi layer target at 15 yards. After 50 shots I will leave the arrow in water over night, remove it from the water and shoot each arrow. After 75 shots I will take the nocks, leave them in salt water for over 12 hours, let them dry for a day or two than shoot them. At the end of the test if any nocks are still working I will try some life like tests to see if I can break them. I am shooting a Diamond Marquis bow set at 64lbs and 28″ draw. I have 460grain carbon express piledriver arrows with 100 grain tips. I am shooting the arrows around 260fps. I purchased the Firenock through their website at http://shop.firenock.com. The nock cost me $20.95 USD plus shipping to Canada. The Carbon Express Lazer Eye and the Nocturnal were bought at a local Archery shop. The Lazer eye was $13.50 CAN and the Noctural was $34.99 CAN for a three pack which is $11.66 CAN each.

Upon getting all the nocks, taking them out of the package and installing I noticed that all three nocks were drastically different. The Firenock was the most technical looking nock which was a little more tricky to put together compared to the other two nocks as the other two came pre-assembled and only required to be put into the arrow. Once I figured out how the o-rings all go and how the battery fits in, the Firenock was relatively simple to put together. The one thing that I liked about the Firenock is that it comes with a few different colors of nocks and that it also comes with a practice weight that fits into the spare nocks. This allows you to tune your bow/arrows without having to shoot the actual lighted nock, saving some battery life. The Lazer Eye was a little tough to fit into the arrow as it was a really tight fit and required a fair bit of effort to slide into the arrow.

After getting the nocks all installed I started to take some shots with them. None of the nocks seemed to change the flight of my arrows in anyway although I never did paper test my arrows after installing the nocks to know for certain. After my first shot I noticed that the Firenock was the brightest of all. Than there was the Nocturnal which was still fairly bright but not quite as bright as the Firenock. The Carbon Express Lazer Eye was noticeably dimmer than the other two. After getting my arrows I had to figure out how to turn them off. The Firenock was very simple to turn off as all you had to do was hold your arrow about twelve inches in the air and drop it on the floor and it turned off and was ready for the next shot. The Nockturnal was a little more tricky as you had to take a field point or a broadhead tip and stick it into a hole in the side of the knock and use the tip to lift up a little plunger inside to reset the knock. It took a few times to get used to it, but once figured out it wasn’t too bad. My only issue with it was that I didn’t like the idea of being out hunting and possibly having to use a broadhead tip to turn the knock off as it could be somewhat easy to cut yourself. The Carbon Express Lazer Eye wasn’t the toughest or the hardest to turn off. All you have to do is pull the knock back out of the arrow by about 1/4″ and the knock resets. The nocks can be a little tricky to grip to pull out, or you can do what I did a few times and used my teeth, but this method probably isn’t recommended. I also didn’t really like this idea just because it felt a little weird shooting a arrow where the nock wasn’t set all the way in where it should be.

After the first 50 shots you could see a noticible change in the Carbon Express Lazer Eye. The light was starting to get fairly dim and tougher to see. The Firenock and the Nnocturnal both stayed nice and bright and very comparable to how bright they were out of the package. After the 50 shots I proceeded to do the water test. I left the arrows and nocks fully submerged in water over night and removed them in the early afternoon. I than waited until later that night to shoot them. I shot all three arrows and was surprised by what I saw. The Nocturnal still worked perfectly and didn’t seem to be effected. The Carbon Express Lazer eye was very dim and almost tough to see that it was on after shooting it. The Firenock had never turned on after shooting it. I than inspected the arrow and saw some corrosion coming out by the nock. I pulled the knock out and the whole thing was ruined. I made sure that all nocks were installed how they should have been before placing them in the water.

I e-mailed the owner of Firenock and explained that the nock appeared to be ruined. He phoned me back within 10min of my e-mail (8pm here std. Mtn time) which impressed me as it shows he is commited to making a great product. He assured me that my nock wasn’t squared so it leaked some water in. He than sent me a few replacement batteries to help me finish my test. Once I got the nocks I never did the preliminary 50 shots, I just went straight to the tests. I re-did the water test and the nock worked perfectly after, so the first malfunction must have been from a installing error.

After 68 shots the Carbon Express Lazer Eye had failed. The nock is a sealed unit so I couldn’t tell if it was just a dead battery or if it was a failure from the water, but do to how fast the nock started fading I’m assuming the battery life wasn’t the greatest with that nock and that the water probably didn’t help it much. As I removed it to look it over and see why it failed, I saw that the plastic plunger on the bottom of the nock was stuck in the end of my arrow. I installed and removed the nock several times to get it out but it wouldn’t come. This would be a big issue if you planned on replacing the nock with a new one in the same arrow as it might not work right and you would start building up weight at the end of the arrow effecting the flight.

After 75 shots the Nocturnal was still working as it should be. Still no issues with the nock. My only problems with the nock was that it was starting to show some noticable wear by the little hole where you had to stick the the arrow tip in to turn off the nock. The nock was also starting to dim a little bit. 25 shots after dipping my new Firenock in the water it was still working normally and was just as bright as it was when I first shot it. After the 75th shot I went and filled a glass with some salt water and left the nocks in the water for 14 hours. I than removed the arrows out of the water and put them directly into my bow box.

Two days later I pulled the arrows out and started testing again. Both nocks seemed to work fine. The Nocturnal was still dimming a little bit but still worked fine. The Firenock was still working normally as well. I continued to shoot the arrows 25 more times. At the end of the 25 shots the Firenock was noticeably brighter but both nocks seemed to be working normally. As mentioned above the Nockturnal was showing some more wear around the hole that turns the nock off, but still worked well.

Due to me not wanting to wreck my arrows I decided to come up with some of my own tests. One of my tests was to shoot the arrow through some branches into my target to see if that would effect them. Both nocks turned on as they were supposed to and never were effected by the branches. I than shot the arrow across the ground in a open field, but once again both nocks seemed to work after the tests were done.

After all the testing was done, I was impressed with both the Nockturnal and the Firenock. Both nocks seemed to work through several different conditions and both never let me down. Despite the higher end cost of the Firenock, having the option to replace batteries or other parts could make them the more cost efficient nock after a few years. The Nockturnal is a very nice and simple design, but being a concealed unit takes away the ability to fix the nock if anything were to happen. Also I could see someone ruining the Nockturnal, or even injuring themselves due to the design on how to turn them off as I have heard of people using a knife tip or even a broadhead tip to turn them off.