Gator Season is Upon Us

by Michael Smith
in Bowhunting Posts
0 0
A A
0 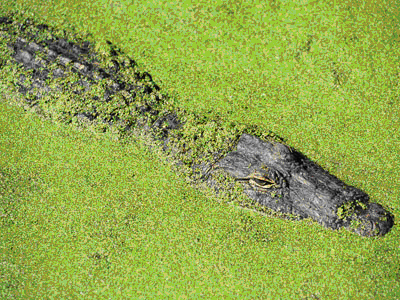 Gator season is upon us For those wanting to chase that big reptile of their dreams the time is near as gator season opens in the state of Florida August 15. Boat loads of hunters will be waiting impatiently with their engines at idle waiting on the seconds to wind down so they can go in search of that elusive reptile.

But are they really ready? Have they really done the proper scouting and prepping it takes to get a trophy gator? Scouting, as every hunter knows, is a major part of any hunting activity and the best times to be doing that are the times that you are going to be hunting. I want to be out there at night and find out when and where the gators are the most active. Although gators roam and are opportunistic feeders they are still territorial.

Patterning one of these big boys is possible but hard to do, so there is a lot of time put in for scouting. When you find the right equipment for bow hunting, including gator hunting being familiar with it and knowing how to use it properly is a must. It’s kind of like putting presents together on Christmas Eve without the instruction manual. If you’re going bow hunting for these big critters you’ll want to go out bow fishing as much as possible (this is what I call scouting) and try out your rig under similar conditions. That way you will have worked out all the kinks you may find in your equipment.

You’ll also want a reel that will release a buoy to keep the gator on a line so you can keep track of him (which is a law in Fla.) at all times. Cruising the dark murky water at night at slow speeds with a good spotlight is the best way to locate gators. Gators have an extra set of eye lids that glow an eerie red when a light hits them and when you see one out there whose eyes have some distance between them that’s when you’ll know you’re on a good one.

Another good way to locate big gators is to listen for the loud deep bellows they make to communicate with each other. When you’re close to a gator and don’t know it this noise will make the hair on the back of your neck stand up.

The best placement for your shot is between the front shoulders. This will give you the best control of the gator. When you make your shot he will take off like a rocket. If you can imagine a sailfish ripping line off of a big spinning reel that’s about equivalent to the burst of speed he is going to unleash. The violent thrashing and amount of water they can throw is alone worth the price of admission.

Once you have him with the bow you’re going to want to keep a couple of bigger lines with harpoons ready so you can control him better. You’ll also want the bang stick handy once you do have him under control and its time to kill that gator. Your heart is going to be pumping and keep in mind that statistically this is the most dangerous part of the hunt. The closer these big boys get to the boat the rowdier they get. They are going to spin in circles and throw their tail around and do the best they can to get loose of those lines. So first warning, be careful with that tail. Their tail is a huge muscle that is half the length of their body and they can throw the biggest man out of the boat with just one swipe of it. And that is one place none of us want to be, in the water with a really mad gator.

Next comes the bang stick. A bang stick is a firearm of various calibers that detonates when it is plunged against something with resistance. Some times called a power head, a bang stick is the only firearm allowed in the boat while gator hunting in Florida on public lands. Many a gator hunter has lost thumbs, fingers and other body parts not to mention putting holes in their boats while using a bang stick.

Once you have your gator under control and you have hit him just behind the eyes with the bang stick the next step is getting his mouth taped shut. Here is where you might need to take another deep breath. You have to reach down and grab him and hold his mouth shut while your trusting buddy tapes him up. Several wraps with electrical tape will ensure his mouth stays shut. The tremendous closing/biting power of a gator is rated at 2500 lbs per square inch of bite pressure. The majority of jaw muscles in a gator are used for closing however so holding his mouth shut can be done by hand. Now that you have his mouth taped shut severing his spine is the next step. We usually use a 1” wide wood chisel and a good hammer. Where the head and neck meet is where you want to place the chisel and give it a few good whacks with the hammer. Just make sure you break the spinal cord, this will slow his movement down but not all of it. He is still going to move some like a snake or a turtle would but done properly you’ll have him right where you want him in the boat.

There are several great recipes for gator and they are very high on my chart for table fair. My favorite is to cut it into chunks dip it into some flavored flour and deep fry. The gator hides also have many uses like a beautiful purse or a great pair of boots for you or even a great mount for your trophy room. Most outfitters will also buy the meat and hide from you which helps defer the cost. If time is an issue or you would like to go with an Outfitter then there are plenty here in Fla. Most of these hunts start around $2000.00 depending on your package and can provide all of your equipment if needed.

You will need to talk with your Outfitter and make sure he knows what you’re going to need. Gator season is a special time of year where you get to hunt an animal that is one of the oldest species on earth. This year we will start our gator season out on Orange Lake just outside Gainesville Fla. I don’t think it could be more appropriate, it is the home of the fighting gators.  GO GATORS !