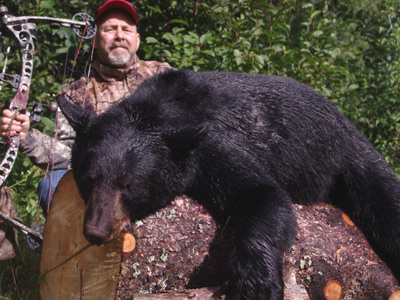 Chef Klaus (Mike Ditschler) and Frank Vrandack drove in Frank’s pickup to the site Frank wanted to hunt. Frank got out. Earlier in the day he had checked the bait and it was hit so he baited it and two more baits, so his site was ready to go. Frank climbed up to his treestand and sat down and waited, still as a stone.It was an overcast, windy afternoon, with occasional bursts of rain and drizzle. All in all, a good afternoon for bear hunting.

Chef Klaus drove on to the last stand site on the road. It was raining “sideways” and he did not have his rain jacket. He found a rain jacket in Frank’s truck and put it on and took a bucket of bait in. The bait was hit and he baited it. Canada has a regulation that a bow must be in a case after hunting hours so he got his bow out of the case and hid the case at the base of the tree. 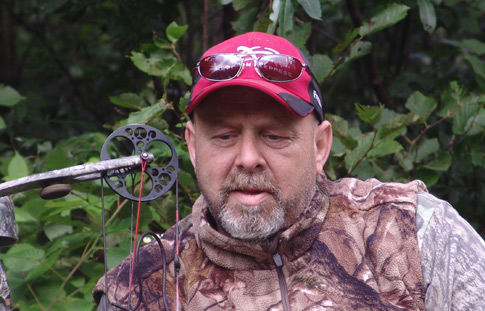 The Chef climbed up to his treestand. He screwed a bow hanger in the tree and put his bow on it. The rain lightened up a little and he took the rain jacket off and stuck it in the pine branches over his head to keep the rain off him. Mosquitoes were awful and he started his ThermaCELL. In minutes the flying insects were gone.

Ten minutes later he heard a noise in the woods behind him. He stood and looked toward the sound and saw a bear. It swung to the right and walked through the thickest trees and came up directly under the treestand. Mike watched as the bear stepped right on his bow case, he walked right over it like it was not even there.

Chef Klaus had moved the bait when he set up the stand the day before. The bear went to the old bait and stopped. When it saw the white bucket the bear walked to it, tilted it up and stuck his head in. Mike took its picture. 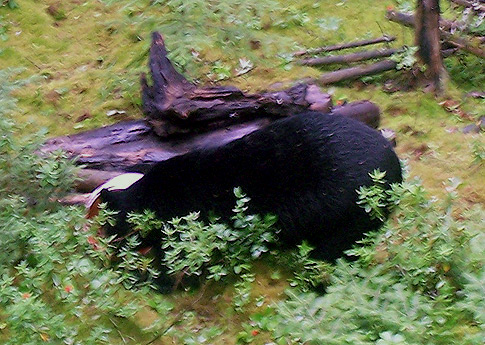 The Chef took more pictures and then put up his camera. When the bear went to the bait logs Mike slipped his bow off the bow hanger. 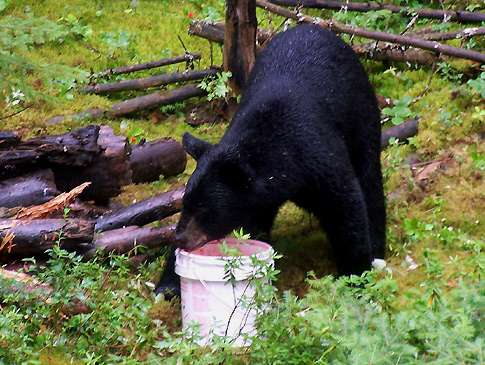 The bear was totally broadside. Chef Klaus drew and put the sight pin 2 inches behind the shoulder and released the arrow. It hit perfect behind the shoulder. The bear did a U-Turn and ran to the right for 20 yards and crashed and Mike heard a loud death moan.

Chef Klaus sat down and had a cigarette. Then he lowered his bow, put his back pack on and got out of the tree, and walked to the bear. He thought, “What a nice coat and what a nice melon.”

He couldn’t move the bear by himself so he drove back to camp. Andy was there and they got the bear. 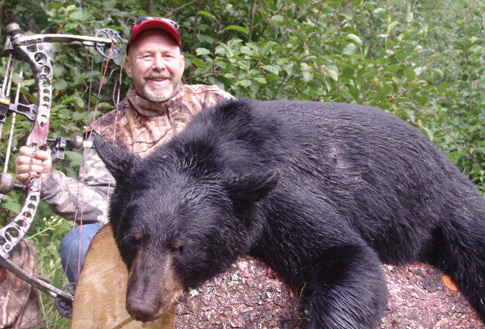 Gator Season is Upon Us