by Tony Pannkuk
in Bowhunting Posts
0 0
A A
2 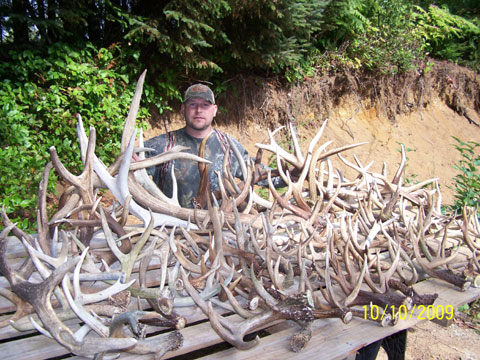 Tony Wintrip with some of the antlers he has been collecting for the past two years.

Sponsored By Limbsaver. Products That Work!

While out in the woods, most hunters will pick up an antler shed and carry it back to their vehicle, claiming the prize that is only second in taking a deer or an elk while hunting.

A friend of mine, Tony Wintrip, spends some of his spare time looking for what most hunters hope to find: antlers. Over the past few years, he has added over 200 antlers to his collection. Recently, I had an opportunity to spend some time with Wintrip to learn some of his secrets, and will share them with you.

The prime time for searching for deer antlers will start in January. But he cautions not to be too eager to leave human scent in the area. If the deer has not dropped his rack yet, you could drive him out of the area and not find that fresh set of antlers.  He also said you could realistically hunt for them year round. But conditions will be more favorable during the winter with no leaves on the trees, plus the grass will be down. After April, the grass starts to grow making it harder to locate the dropped antlers. Of course, if there is snow to contend with, it will make hunting more difficult.

Wintrip has found deer and elk antlers in several western states and has found them in Lewis, Jefferson, Grays Harbor, Klickitat, Skamania and Cowlitz counties in our state of Washington. He adds that all states and counties where he has been lucky finding antlers have both deer and elk.

Here are a few tips that Wintrip shared with me. Again, for deer it will be January when they start to loose their antlers, and for elk it will be at the end of March.

One year Wintrip decided to cross the Lockhsa River in Idaho while elk hunting and look for antlers. While slowly crisscrossing a medium-sized plateau he came across a nice antler shed from a good size elk. He decided to go back the next morning to hunt the area. It wasn’t long before it paid off as a nice bull elk appeared. His hunting trip ended on the first morning on the first day of the hunt.

There are some of the perks you’ll receive, too. You will familiarize yourself in an area you might want to hunt during the next season, and learn the conundrums of the deer and elk. In addition, you’ll see animals you enjoy seeing and the exercise. There is a monetary value for those who seek it, but the last and most important value is finding those treasures that you went out looking for.

As a note: It is legal to pick up natural sheds from deer and elk but if you find a skull with antlers attached, it is not legal to take them out, but many hunters do.  Sheep and goats horns are illegal to bring out whether attached to a skull or not, unless you have a current tag for the animal, but you will need to punch the tag.