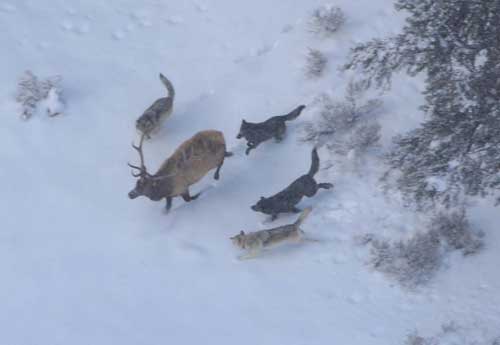 Has The U.S. Fish and Wildlife Service  Become A Rogue Agency?

There are now a number of very dark clouds hanging over the fish and wildlife arm of the U.S. Department of the Interior.  And the tallest thunder cell has to be the manner in which the U.S. Fish and Wildlife Service has handled the so-called Wolf Recovery Project in the Northern Rocky Mountain states of Wyoming, Idaho and Montana – especially in how the agency resorted to the manipulation of wolf science and wolf facts to expedite restoring wolf populations where they had been missing for most of the past 70 or 80 years.  Or, were they?

The Endangered Species Act was established in 1973, to protect and restore endangered or threatened wildlife species.  Back when that act became law, there were between 50,000 and 60,000 wolves of varying subspecies roaming freely across Canada (and likely just as many in Alaska).  Still, since there were only about 700 to 1,000 wolves known to exist in northern Minnesota and in several small pockets in northwestern Montana, the U.S. Fish and Wildlife Service pushed to get the “gray wolf” added to the ESA list of endangered species in 1974. 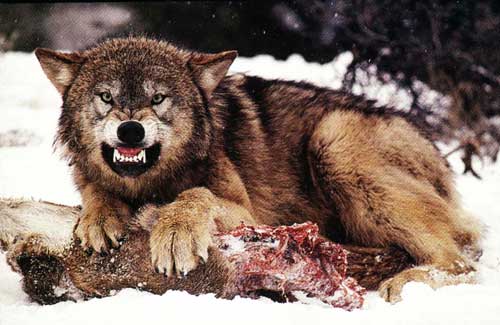 First of all, the gray wolves of central Canada were never really endangered, or threatened for that matter.  Despite ongoing wolf control efforts in Ontario, the wolf population just to the north of the U.S.-Canada border was not endangered back in 1973 when the ESA was established.  Neither have wolves been endangered or threatened there since that act was put into place.  Likewise, there has not been any efforts to prevent their migration south, into northern Minnesota.  Even so, the mad wolf scientists of the FWS felt compelled to write themselves into the annals of wildlife conservation and took it upon themselves to classify the wolves of the upper Midwest as a “Distinct Population Segment” , and endangered – even though absolutely nothing separated them from the tens of thousands of wolves north of the Canadian border.

And their muddling with such wolf facts came back to nip them hard on their backside.

As wolf numbers began to grow and spread, from northern Minnesota into upper Wisconsin and the Upper Peninsula of Michigan, USFWS moved to remove them from the Endangered Species List in early 2008.  At that time, there were likely close to 4,000 wolves spread across the upper Midwest, and the agency determined that the gray wolf of that region was no longer an endangered species.  FWS decided  to delist the wolf there. 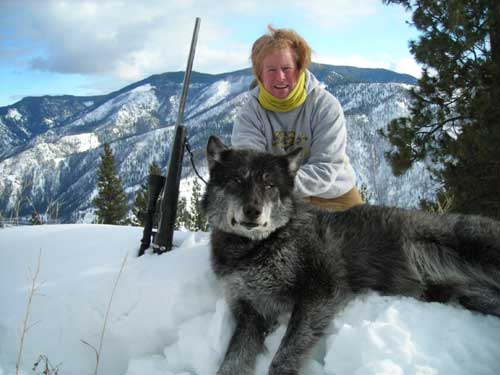 In short order, the Humane Society of the United States (and a number of other “environmental” co-plaintiffs) challenged the USFWS “Final Rule” on removing Midwestern wolves from the protection of the Endangered Species Act. HSUS also asserted that the ESA does not authorize USFWS to designate and delist “Distinct Population Segments”.  In other words, the act does not allow the agency “to carve out” healthy sub-populations of otherwise endangered or threatened species.

The court questioned, “Whether the ESA permits FWS to use the DPS tool to remove the protection of the statute from a healthy sub-population of a listed species, even if that sub-population was neither designated as a DPS nor listed as endangered or threatened beforehand.”

The delisting of the wolf in the upper Midwest did not happen in 2008, and management of those wolves is still on hold – even though there are now between 5,000 and 6,000 wolves across upper Minnesota, Wisconsin and Michigan.  The whitetail deer herds in many areas where wolf numbers are at their highest have now been reduced by 40- to 60-percent, and moose have practically disappeared where they were once abundant.  Likewise, years of trying to re-establish elk herds in these states is now in real jeopardy, with the wolves destroying spring calf recruitment.

Wrongly, USFWS had established a line, an international boundary, that separated the wolves of the U.S. from the wolves of Canada.  And largely because of that intervention and poor decision making, big game resources and livestock production across the upper Midwest are now being severely impacted.  However, across the border, in Canada, aggressive control of the same “non endangered” wolves continues.

Faced with establishing a recovered wolf population in the Northern Rockies, USFWS threw professional wildlife management ethics right out the window.   To say that the Wolf Recovery Project of the West has been plagued with lies and deceit from the very start is putting it mildly.

Well before Canadian wolves were dumped into the mountains of Idaho, northwestern Wyoming, and western Montana, many residents were aware of small pockets of wolves in several areas – wolves which had been there for years.  However, since they had not been “discovered” by some recognized wolf expert, they were not accepted as a “Distinct Population Segment”.  So, USFWS took it upon itself to ignore the possibility of any real resident wolves (similar to its decision to draw the line between the wolves of northern Minnesota and the wolves of Canada) in order to simply accelerate the “reintroduction” of wolves in the Northern Rockies, where in their opinion wolves had been missing for the past 75 or 80 years.

Research as hard as you may, you will not find where Congress authorized funding for the capture, transportation, care, or handling of those wolves before being released into what was America’s greatest wildlife wonderland.  So, where did USFWS get all of those millions of dollars needed to fund such a major project?

Jim Beers, a former Chief of National Wildlife Refuge Operations, who spent the latter part of his 32-year career with the agency working with the disbursement of federally collected tax dollars to help fund state wildlife departments and conservation programs, says USFWS literally stole the money from those funds.  Now, these aren’t the tax dollars collected from ALL U.S. taxpayers.  Rather, these are the excise tax dollars that America’s sportsmen voluntarily pay on firearm, ammunition, archery gear, fishing tackle and other outdoor related product purchases – under the Pitman-Robertson Act.  And those funds are, by law, to be used exclusively for wildlife habitat and fisheries improvement.

According to Beers, through the 1990s USFWS embezzled between $60- and $70-million from Pitman-Robertson funds, with a healthy chunk of that money used to illegally finance capturing northern Canadian wolves and transplanting them into the Northern Rockies.  Once again, USFWS stepped way beyond its authority.  The wolves they brought to Idaho, Wyoming and Montana are found all across northern British Columbia, the Yukon, northern Alberta and northern Saskatchewan – and are in no way endangered.  Likewise, they are not the native wolf of the U.S. Northern Rockies.  The transplanted wolves are a significantly larger and more aggressive wolf than the wolves that were native to the Northwest.  Those residents who know that small pockets of wolves still existed here now accuse USFWS of actually violating the Endangered Species Act.

Plaguing this project even further is that it seems USFWS purposely eliminated any sort of paper trail that would document how much money was spent on bringing in several different invasive subspecies of wolves, the actual subspecies brought across the border, or even the true number of wolves involved in the initial releases.  The agency did not file the required Form 3-177, which would have documented all of this.  Ironically, this is a USFWS form, required for all importation of wildlife into this country. 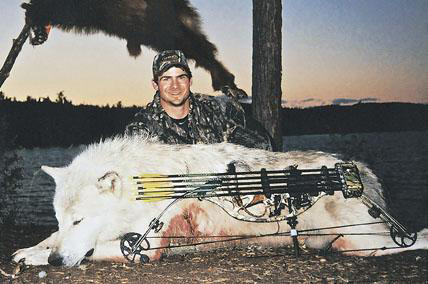 Even the Environmental Impact Statement, filed by project leader Ed Bangs, is suspect of being filled with false information in regards to the impact wolves would have on elk, moose, deer and other big game populations, as well as on livestock production.  The depredation numbers shared in that statement are only about a third of the impact now being realized.  The residents of the Northern Rockies now feel that the “experts” who put together the Northern Rockies Wolf Recovery Plan either didn’t know enough about wolves to play a role, or the misinformation was presented on purpose to sway the opinion of the general public in favor of bringing back a major predator which was eliminated decades ago.

The sportsmen of Idaho, Wyoming and Montana, who have paid the way for the conservation programs that brought big game populations back from nearly being lost during the early 1900s largely feel that USFWS, and their own state wildlife agencies to some degree, are now selling them out.  They know that a large percentage of today’s wildlife managers do not hunt, and that they now tend to side more with the major environmental organizations which have a strong anti-hunting stand.  Knowing they are paying these managers salaries angers many hunters – and so does the thought that USFWS could steal $60- to $70-million of their tax dollars to introduce a non-indigenous wolf subspecies that is now destroying the past 75 years of big game conservation work.

In some areas, wolves have already decimated elk herds by as much as 60- to 80-percent.  The once great northern Yellowstone herd, which numbered around 19,000 at the time the first northern Alberta wolves were released inside the park in 1995, is now down to only a few thousand remaining animals.  And those elk that have managed to survive non-stop pressure from the wolves are quickly growing old.  Thanks to the near 100-percent loss of elk calves in the spring, the average age of Yellowstone elk is now 8 to 9 years.  Before the USFWS “introduction” of an invasive wolf subspecies, elk there averaged 4 years of age.

Despite all the manipulation of wolf science and wolf facts, along with the theft of sportsmen provided money to illegally fund the Northern Rockies Wolf Recovery Project, and all the lies and deceit to hide the truth from the public, the wolf fiasco continues.  Those who are feeling the bite of the wolf on their economy and way of life are now questioning a legal system that bows down to the demands of environmental groups, which have profited hundreds of millions of taxpayer dollars from frivolous lawsuits.  Many sportsmen and tax-paying citizens now feel that the USFWS relationship with the greenie groups needs to be investigated.  Likewise, that the financial loop hole known as the “Equal Access to Justice Act” needs to be eliminated, preventing environmental organizations from receiving financial restitution from the U.S. Government for grossly padded legal expenses when they do file those thousands of lawsuits.  Their favorite “defendant” tends to be USFWS.  Has the agency become an all too willing participant in these legal actions?

Most of all, Americans have grown weary of government agencies that repeatedly step beyond their authority, to use whatever means or methods necessary to achieve their desired goals.  The U.S. Fish and Wildlife Service is one such rogue agency.  – Toby Bridges, LOBO WATCH