The Big One That Didn’t Get Away 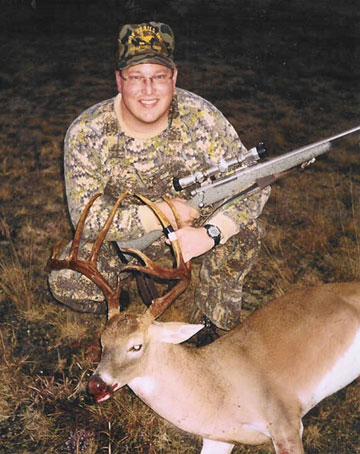 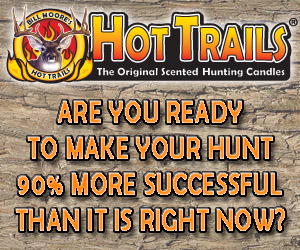 An Open Letter to Bill Moore – President of Hot Trails

I just wanted to drop you a letter and let you know about a Hot Trails success story I had.

Last season, I had an invitation to hunt with my wife’s uncle on his lease in Palo Pinto County, about one hour west of Fort Worth, TX. Now, this area of Texas is not known for bucks with large racks, or even for having a lot of deer. But I said to myself, “opening weekend on a deer lease or not hunt?” Not a hard decision to make. I have hunted this area for quite a few years, and I am familiar with area. You will see doe and a few bucks. Most of the time, you see either young bucks or older bucks with smaller racks. The area of the lease I decided to hunt was a large meadow with about waist-high grass. There are some pretty thick areas of trees around the meadow, but they are much too thick to get into. About 150 yards behind this meadow is an area we called the canyon because of the drop-off to get down into it. This is another area of the lease where you really can’t hunt because of the thickness of the brush..

Opening morning came and went with little excitement. I was burning a Doe-In-Heat candle, but there was little or no wind around. In fact, I only saw two deer that morning, and one was a yearling doe that came right up to my lantern and sniffed the candle. Then she went back to nibbling on some grass. That afternoon was a different story.

I climbed into my blind that Saturday afternoon around 2:00 pm. It was a pretty typical early November day in north Texas. The temperature was in the low 70s, and there was a light wind. I had seen a few signs that the rut was just about to start, so I thought I would try my Hot Trails candles. I have been using the candles for the last couple of years with good success but not like this.

I started out by burning a Doe-In-Heat candle about 50 yards out and then lit a Dominant Buck candle about 10 yards further out. I had placed the candles so that the wind would take the scent into an area of thick trees. I had been in my stand about an hour when I saw him. I had just finished scanning the area with my binoculars and lowered them when something caught my eye through the tall grass.

I could see it was a tail flicking. It must have just walked out of the thicket of trees. I picked up my binoculars again and located the deer. Its head was down eating grass and my first thought was that it was going to be a pretty good sized doe! Then it got a whiff of a candle. It picked its head up, and I almost dropped the binoculars. It was the largest buck I had ever seen on this lease. From where I sat, it appeared to be about 8-points with a very tall rack, not very wide, but very tall.

Once I got my heart started again, I carefully started to prepare for the shot. The buck was facing away from me, and I did not have a shot. Since we really were not full into the rut, it appeared that the Dominant Buck candle was bothering him. He would put his head down to eat and pick it right back up, sniff and look around trying to figure out where it was coming from.

This went on for about 5  minutes or so. He finally had enough and had to go and investigate for himself. He started walking straight to the candles! He would take a few steps, stick his head up and sniff, and then start moving again. At one point he was walking away from me, and when he lost the scent he turned to find it again. Just what I was waiting for. He finally gave me a shot I could not resist. When I shot, his nose was up in the air sniffing. He dropped right there.

Again my heart stopped, this was twice in the last 10 minutes. After waiting for 20 minutes (again, probably more like 3-5 minutes), I got out of my blind and walked up to the buck. He was even bigger than I had thought. Usually when walking up to a buck the rack gets smaller the closer you get, but this one was getting bigger! He was actually a 10-point with one of the brow tines broken. When I got him back to camp, he scored a 133 with 12” G-2s. As I mentioned before, I had hunted this area quite a few times before, and the largest buck I had seen was a very small 8-point. There had been rumors  that a large buck was back around where I shot this one, but the only person that had seen it was the ranch owner and that had been from a distance. This buck is the record holder for this lease and my wife’s uncle has been on this lease since 1985.

I have hunted this area with my bow before as well. With this buck being oblivious to anything around him except for figuring out where the scent was coming from, it would have been the same shot with my bow. I probably could have walked right up to him and he wouldn’t have paid any attention to me.

Thank you again for the great candles and keep up the good work. I will be getting in touch with you shortly to place my order for this season.

to make your season more productive to to: Hot Trails