The Third Time’s The Charm

by Justin Mason
in Bowhunting Posts
0 0
A A
0 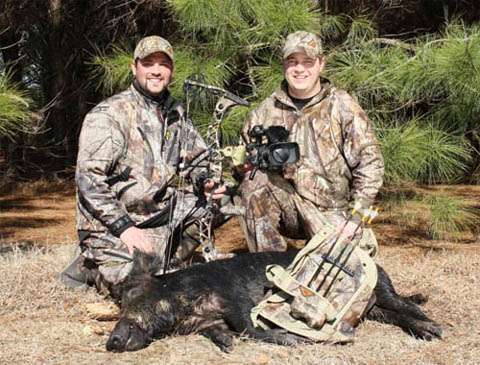 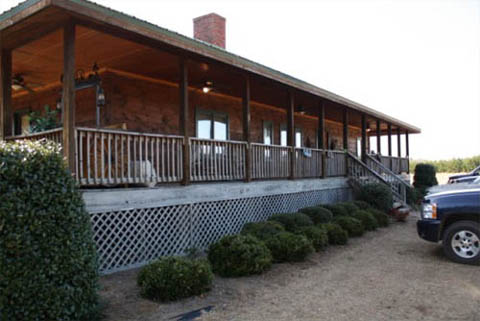 After spending six days chasing wild boars, with no avail, we decided to change our strategy. Fresh tracks of wild boars crisscrossed the Black River Plantation in New Zion, SC. And once our guide, and good friend, Jonathon Philips had heard boars fighting in the daylight, Wes Alexander and I knew this was the time and place one of us would harvest a wild boar.

The majority of our previous time was spent in a ground blind in Ehrhardt, SC during the first circuit event of the 2010 Campbell Outdoor Challenge. Our hunting areas in Ehrhardt proved to have many hogs; however, all of the activity was occurring at night. And because hunting wild boars is illegal at night, and filming wild boars would be nearly impossible, we left Ehrhardt empty handed.

Jonathon came out to our truck when we arrived and laid out the game plan for that afternoon. He was going to hang a new double stand set (hunter and cameraman) in an area where he had heard a few boars fighting the evening prior. As Jonathon explained the new area we could see the confident look on his face. We knew it wouldn’t be long before we too were going to be enjoying some good ol’ bacon!

As we sprayed down at the truck with our scent elimination products bySeemz Technology, I just had that gut-feel we were in for some evening entertainment. We had spent the six long days prior to this afternoon with no wild boar action – and I mean none – but today just felt dif-ferent. Its weird how this feeling can overcome your body, but many hunters know exactly where I am coming from.

Our stand setup was perfect. The bedding area was off to our left, the food source was immedi-ately to our right, and the only way for them to access food was right through the kitchen (underneath our set). And we didn’t have to wait long until a group of pigs did just that. It’s like they read the book. They came storming in from the swamps to our left with one thing on their mind; food.

I was running the camera that afternoon and I could hear Wes through the headphones, “Mase, don’t move there’s a bunch of pigs right in front of us.” By the time I could get the camera turned on, swung around the tree, and focused in on the pigs, I just caught the tail end of one running into the brush. So I sat motionless. I waited, and waited, and waited some more.

Finally they busted out of the bushes – headed the wrong way. Instead of hitting the food source, they went right back into the swamp. And then I heard Wes through the headset, “You have got to be kidding me.” But before we could get too disappointed, they entered from the swamp again. And they did the exact same thing. They ran to the brush, stopping just shy of the shooting lane, then they busted back in to the swamp out of sight.

Do you know the saying, “The third times the charm”? Well this was true for Wes and I. Five minutes after showing their tails the first time, the pigs entered the “dead zone”. So as I pre-pared to get the camera back on, for the third time, I hear Wes say, “Big pig, big pig, coming right to us.” I could tell from the exuberance in his voice there was a shooter in the group and hisVictory Arrow was ready to go. Lights. Camera. Action.

Wes guided me step-by-step like an announcer at a football game. “She’s headed behind a big tree, 32 yards”, he said softly. And then I heard, “She needs about 3 more steps and I’ll have a clear shot.” The camera followed her every move, and in the final moments I heard Wes ask, “Mase, you on her?” She positioned herself perfectly in the shooting lane and Wes let hisLimbsaver Deadzone do the rest of the work. Big Hog Down!

We finally did it! I threw the headphones off and quickly got the camera back around to Wes. We gave a big fist-pump and yelled like two guys who had just won the lottery! It felt so good. We relived the hunt over and over again several times in the stand before we made our way out to the truck.

Jonathon came to meet us so we got to share our success story again. Then we hit the woods to recover Wes’s first Wild Boar!

From the 34 hours we sat in the ground blind with no action, to putting out and monitoring sev-eral trail cameras, there’s one thing that is for sure; this hunt will be marked down as one of the toughest and most rewarding in my book. But I can tell you from this experience; the harder your work for an animal the more respect and appreciation you have for the game. The third time on this hunt proved to be a charm.