by Jana Waller
in Bowhunting News
0 0
0 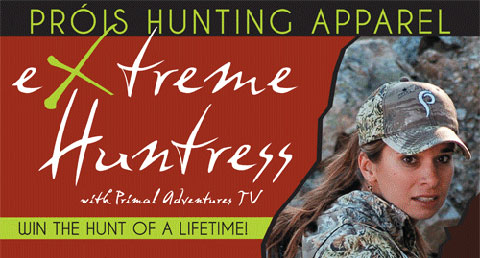 The Hunt Is On For The Gal Who Can Really Bring It In The Field – Enter Today!

Last year, hundreds of incredible essays were submitted, countless online votes were cast, and your community voted for the most hardcore female hunter who exhibits fearless pursuits with no limits in the field. And now, Próis® Hunting and Field Apparel has partnered once again with Primal Adventures TV — and a host of industry sponsors — to once again put out a clarion call to female hunters everywhere for the search of the most intrepid huntress out there with its

If your idea of a good time means taking on one of the ?Big 5? with a bow or hunting grizzly through thick bush – then we want to hear your unforgettable story! Simply submit an essay with pictures of your most ?extreme? adventure by October 1st for the chance to take home the 2010 ?Extreme Huntress? title, and start gearing up for your hunt of a lifetime that will be filmed by Primal Adventures TV.

Entries that are ranked in the top 10 by a celebrity panel of judges are then placed onto the Tahoe Films, Ltd. website (www.tahoefilms.com) on November 1st, where the hunting public has until January 1, 2011 to select their favorite.

To top it off, the new ?Extreme Huntress? will be fully outfitted with the ?extreme? gear needed for her hunt by contest sponsors including Próis Hunting and Field Apparel,  Otis Technologies, Aimpoint, Bowtech Archery, Swarovski, Schnee and Badlands Packs — an all-inclusive package to be valued at more than $25,000. “We were thrilled with the response and excitement the contest generated last year, and cannot wait to read even more inspiring stories of serious female hunters who really go for it in the field,” says Kirstie Pike, CEO of Próis. “It?s evident that female hunting has quickly earned a major role in the industry, and we?re excited to be able to celebrate these amazing women.” 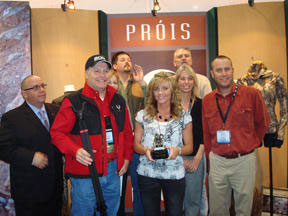 Field Apparel and Tom Opre of Tahoe Films. The contest winner will be officially announced to the industry at both the 2011 Archery Trade Association Show in Indianapolis and the 2011 SHOT Show in Las Vegas. For complete contest rules and regulations, visit www.Próishunting.com or www.tahoefilms.com. For more information about Próis? innovative line of serious, high performance hunting apparel for women, contact the company at 28001-B US Highway 50, Gunnison, CO 81230 · (970) 641-3355 · www.Próishunting.com.

To check out the latest updates on Próis field and pro staff and company news, visit the Próis blog at http://Próishunting.com/community/index.php. Become a fan on Facebook: http://www.facebook.com/people/Kirstie- Pike/100000185674239. Follow Próis on Twitter: www.twitter.com/Próishunting

Rockin' the Stage at the World Deer Expo