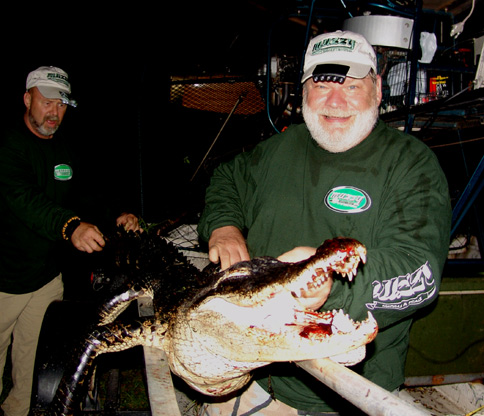 Fred Lutger tells us in his own words about the hunt that made him realize why they say alligators are dangerous.

I have seen alligator hunting on TV. It looked fun and exciting. Now multiply that excitement 100 time by being there and doing it for real! I have been blessed having met good friend Robert Hoague 35 years ago. We have gone on many hunting adventures together. Now throw in good friends David Mills, Mike Ditchler and Williams Wildlife Preserve, crank up the air boats of Joe Porto and Marty Winters and hang on to your hat. The fun was just starting.

David met us at the Fort Meyer airport and headed for the Williams lodge near Arcadia, FL. David is the hunting manager for Williams Farms. He told us of all the hunting and fishing offered on their thousands of private acres. They offer pheasant and quail hunting behind dogs, European tower hunts for pheasant, whitetail deer, Osceola turkey and wild boar hunts with gun and bow, bass fishing for giant Florida black bass, and even bull frog gigging. Throw in alligator hunting to round out the list.

If we filled out gator tags, David offered to take us wild boar hunting and frog gigging. I was looking forward to eating a tub full of bull frog legs. As it turned out, I didn’t frog hunt or boar hunt but did get to gator hunt night and day for four straight days.

On every trip I find something new. This trip I found one of the neatest and handiest items I have ever used. This may surprise you but it was my bow case. Plano Molding Company has a new AW Series Hard case. It is airline approved, a must for my flight from Chicago. But Plano went one step farther and designed a padded Grab N’ Go soft bow case that fits inside. 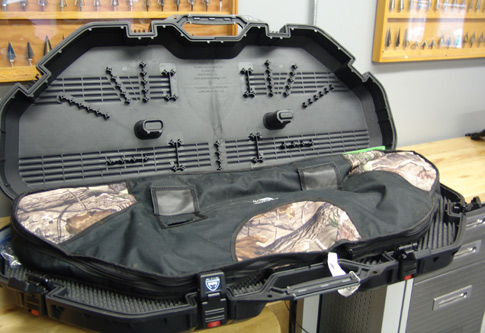 This case detaches when you arrive so you have a bow case that will protect your bow during your hunt. The bigger bulkier case stays at he lodge with all your equipment, the soft case transports your ready to hunt bow in the truck. How neat is that!

Our gear stowed in the back of the Chevy Suburban, we were off looking for gators. The Williams’ farms consisted of fields of vegetables divided by deep wide irrigation ditches, irrigation lakes, and acres and acres of gator and wildlife infested swampland. We drove along levies on both sides of the canals and glassed for gators. They are hard to spot with all the weeds and vegetation growing on the banks and in the water. Every dark spot looked like an alligator. 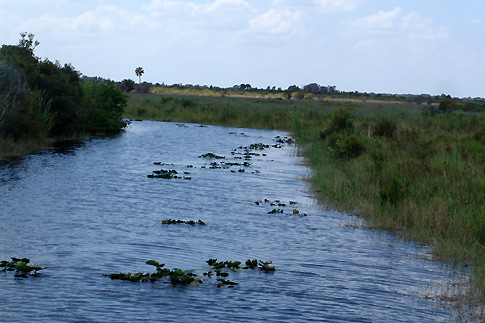 “There he is,” I blurted out with excitement! There was no doubt about it. I was looking at two eyes and a long snout peeking out of the water at the far end of the canal we were glassing. I got better at spotting gators as the week rolled on but I couldn’t hold a candle to the spotting ability of David Mills. Having spent his entire life in gator country this was second nature for him. We made a hasty plan to stalk this gator. Mike was up first to shoot. I took camera duty. This was our first stalk of many as we were were humbled time and again by these weary critters.

We continued till wee morning and headed to bed gatorless. Mike got in a few shots the first day. The second day he got to shoot more. No hits, no gators.

We met up with air boat captains Joe Porto and Marty Winters. I was thrilled. Not only did I get my first adventure in an air boat, I got to pick up my bow for the first time. The boats were backed into the canal and I climbed in to the front seat of Marty’s boat. 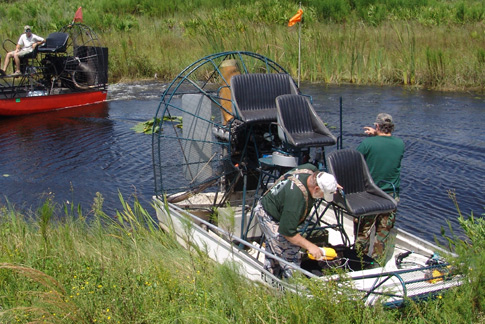 We started cruising the canal. The fun really started as Marty left the canal and headed cross country through the swamps. I don’t know the names of all the trees, shrubs and tall grass but I was surprised as we plowed our own road through thick vegetation to reach more open areas to look for gators. 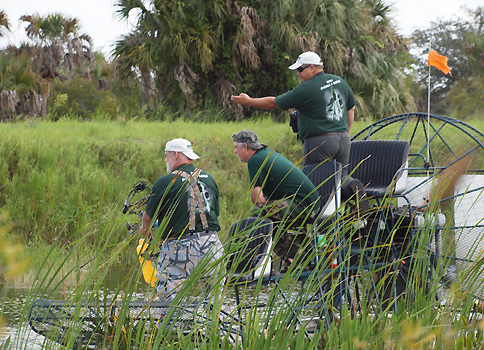 Just before dark we spotted our first gator. He was too small to shoot. Marty said watch this. He crawled down from the steering seat, got to the edge of the boat and leaped on the gator. Both Marty and the gator disappeared under the floating vegetation. I saw churning water and flying vegetation. Marty emerged holding the gator in both hands. This gator might have been too small to shoot, but in my mind it was way too big to be wrestling with. Out of breath, Marty held the gator as we took pictures. I was relieved when I found out I didn’t have to catch my gator this way. 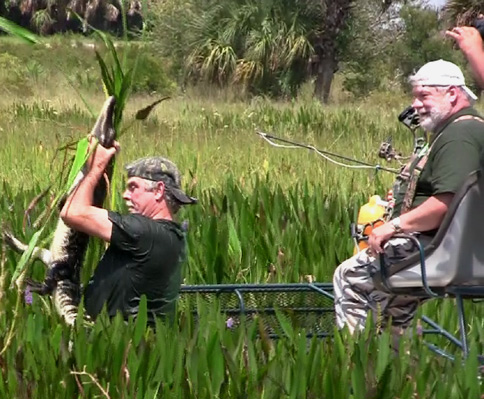 We watched a beautiful sun set and turned on the spotting lights and moved cross country.

Cruising side by side, Joe shouted and pointed to a gator. He positioned Mike for a shot. Mike missed. The grass parted as the gator fled. Marty took up the pursuit. David was on the high seat and spotted the gator and Marty pulled along side for me to shoot. I could not see the gator. Both David and Marty had lights focused on the gator but it was covered in lilly pads and thick water vegetation and grass. Marty had me climb up on the higher platform. I spotted the gator. All I could see was his nose and eyes. He moved. I could now see the whole body. I drew back and aimed at the neck just behind the top of the gators head. I shot. 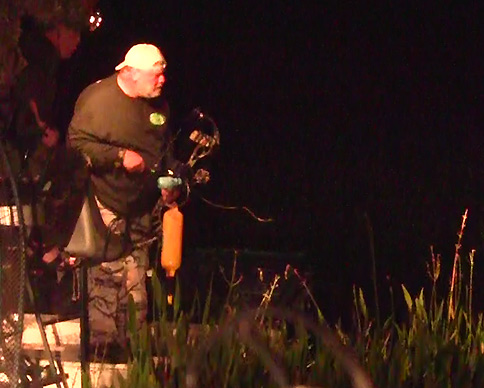 My hit was good. The gator quickly sank below the swamp grass. I pulled the buoy off my bow and handed it to Marty. As the line went out, Marty threw the buoy in the water. We followed a short distance. I reached down and grabbed the buoy along side the boat. 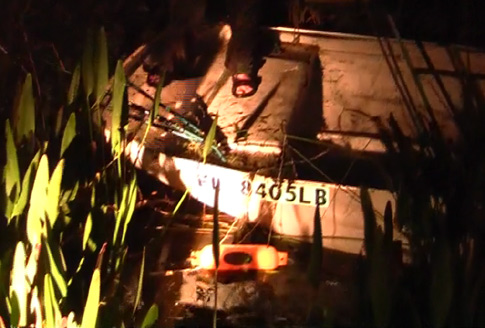 I pulled up the slack line and felt the resistance from the gator. I got him up to the surface. His tail was out of the weeds. Davis cautioned me not to pull too hard. He didn’t want my point to come out of the gator. He shouted at me to get another arrow ready. 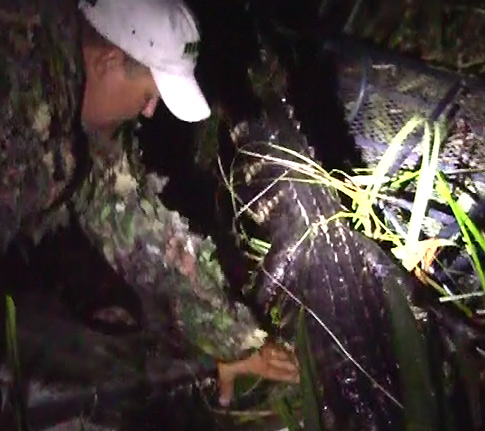 He dug through the vegetation and grabbed the gators tail. Marty joined him and they pulled my gator half way in the boat. 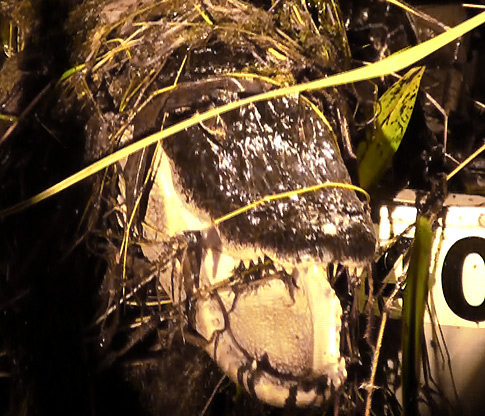 Both Marty and Dave backed off and gave me room to shoot the gator again. I put a 4-blade Muzzy broadhead right through the vitals.

First rule of gator hunting is to tape the gators mouth shut. As Marty held the mouth of the gator shut, David wrapped tape around the jaws. I was now staring at this giant reptile lying in the bottom of the boat. Robert told me when it comes down to action, all hell breaks loose. He was right. This was non-stop action from the moment he was spotted until now. I was enjoying the adrenalin rush. 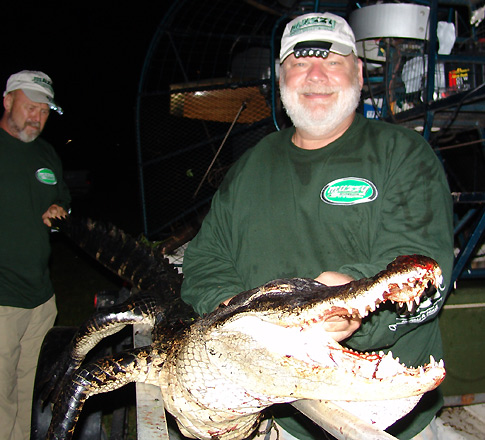 We still had two more gators to catch but the night had been long and we were miles from the trucks. We headed back for the night.

Having two friends with unfilled tags and two more days to hunt, I was happy to be equipment wrangler and picture taker. The next two days brought as much fun and excitement as the first two days. There were many stalks and more shots and two more tags filled. I’ll let Robert tell you about those hunts. They were just as exciting as mine.