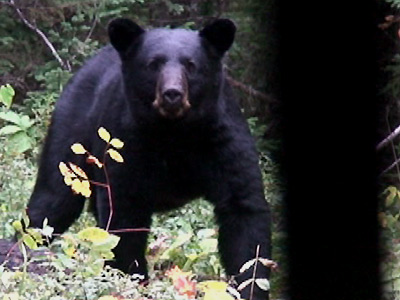 Fred Lutger tells us about his bear hunt in his own words.

Bear hunting is a passion of mine. I killed my first black bear in the early 70’s in Wisconsin. I shot it with a bow and have only used a bow every year since. This year is different. For the first time ever I am hunting with a crossbow. I am still very healthy and still shoot a compound bow. My reasons for using a crossbow is to add another dimension to my hunting. I enjoy shooting, period. I have shot big game with recurve bows, compound bows, rifles, shotguns and even a pistol.

Modern crossbows have reached a peak of performance and design unheard of just a few years ago. For this hunt I chose a Barnett Predator crossbow. It came in a package with scope, bolts, quiver and rope cocker.

Like all hunts, this one started weeks before opening day. Like a giddy kid at Christmas, I opened the crossbow package and started admiring all the fun things packed inside. I never read the instructions and started handling all the parts and pieces as I spread them across my work table. I did pick up the manual last and decided to actually follow the instructions inside.

The Barnett was a quick assembly and I fired my first bolts minuets later. I am very particular about my equipment. I spent day after day shooting and enjoying my new “toy”. I want the sight to be dead on. When I aim, I want the impact of the bolt to be on that exact spot I place the cross hairs. 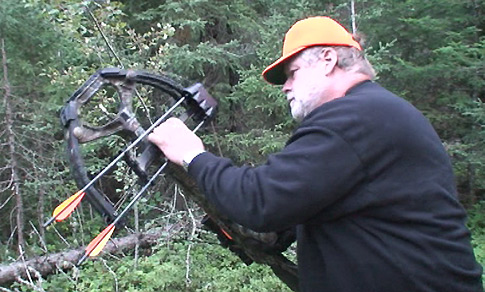 The second day of Ontario’s black bear season this year I watched one of the biggest black bears I have seen in the woods turn sideways and approach my bait. I had the confidence my equipment was as ready as I was. I have encountered and killed many bears over the last 40 years. The bear approaching my bait was a true trophy. I get very particular what I kill. If it isn’t what I want, I am happy to pass. One glance at this bear was all I needed to know I would take him.

There are ways to judge bears for size. I am asked often what to look for. One of the size indicators is the size of the bears ears. If the ears look big, the bear is probably small. Maybe on some bears, but not this one. The first glance I had of this bear is when he stretched his head up to look over the brush behind my bait. The head was enormous and so were the ears. Having only seen his head I knew this was a record book size bear.

He quickly disappeared back into the pines behind the bait. I watched black movement as he circled in the pines. His head came up again and this time he headed for the bait.

The tremendous size of his body was a sight to behold. I immediately put the crosshairs on him and waited for the bear to give me a shot.

As he rounded the stump behind the bait he was face to face with my blind, 15 yards away. He seemed very concerned about the blind.

I put the crosshairs on his briquet between his front legs. This is not the shot I wanted but if he had walked directly to our blind I would have taken this shot. He stood looking my way. In a second he turned to his right either to leave or to head for the bait.

As his left leg stepped forward I put the crosshairs on his chest.

And took my shot.

The bolt flew so fast I didn’t see the hit. The bear was out of sight in one leap into the pine trees behind the bait. I looked at my watch. It was 7:20 p.m. My good friend Robert Hoague was videoing. He nailed the kill. I asked him if he saw the hit. He didn’t but it was on film. We reviewed the footage. The shot was perfect. I took up the blood trail immediately.

I marked the first blood with florescent orange tape. I was able to mark out about 75 yards of trail before the dark woods and fading light made it difficult to see the blood. I decided to wait until morning to resume the trail. We met up with one of our other hunter, Robbie Cramer from Ft Worth, TX. Good news, Robbie had shot a bear. He said his hit was good. We headed for camp.

The next morning we were up before daylight. To The Search For Fred’s Bear…