“Deep in the Heart of Texas” with my Hoyt bow 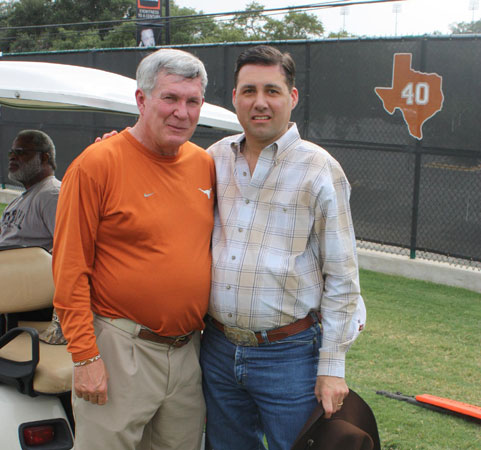 The year was 2006. I was in a hotel room in California at a sports show and glued to my TV as the Texas Longhorn football team played against USC for the National Championship. It was a close game and in the final minutes Vince Young and the Longhorns won the game. What impressed me about the win as much as the effort the team put into it was Coach Mack Brown’s words to the team in the locker room. He celebrated the win, congratulated the team, and then told them not to let that game be the biggest thing in their life but to use it as a stepping stone to do great things and to be a leader in their family and be a good father. That told me a lot about Coach Brown and that he was truly interested in the development of the young men as much as winning games. You can find this speech on youtube.

Fast forward to August 2010. I was standing on a football field next to Coach Brown for a photo. It was one of those points in your career you’ll remember. I am an archer, yet here I was on the field watching Mack Brown and his Longhorns practice. NFL great Earl Campbell introduced me to Coach Brown and we talked briefly as his team was practicing for their first game of the season. I told coach Brown there had been three Texans I had wanted to meet and that I’d already met the other two, George Strait and George W. Bush. He was the third. He grinned.

In my career I’ve had the opportunity to meet many celebrities. Sometimes they live up to their reputation and sometimes you are disappointed. Mack Brown is a solid person and I liked him immediately. Like George W. Bush, he looks you in the eye. You can tell his word is his bond. His staff and the team respects him, that is evident.

Earl and I watched the practice from his golf cart. I enjoyed sitting with a Heisman Trophy Winner, former champion Longhorn, and NFL Hall of Fame player and hearing him talk football. Earl Campbell was known as “The Tyler Rose” since he was from Tyler, Texas. He is a well loved figure in Texas football and remains one of the best running backs to ever play the game. Simply visit YOUTUBE to see some vintage clips of Earl playing football to see why he the opposing team feared Earl. I would later give Earl a Hoyt bow, but that’s for another column.

After the practice, the team went into the dome, a covered practice field to close the session. Coach Brown talked to the players and then introduced Earl Campbell to the team and asked him to speak. After Earl spoke Coach Brown asked me to speak. I spoke to the team and afterward Earl and I met many of the players who came by to say Howdy. Coach Brown invited me back to the field the following week to bring a bow and do a show for the team. He said in his remarks that he wanted to see the baby aspirin shot.

Luckily I would be back in Austin, Texas the following week for another show so I simply rearranged me air travel plans to fly in a day early to be with the team.

I got up at 3Am and took an early flight out of West Virginia and after flying to Atlanta arrived in Austin mid morning. I took a hot shower and changed clothes and headed for the field.

We set up the show on the 50 yard line of the practice field. After the team did some stretching they gathered around the net and Coach Brown introduced me. One of his assistant’s had told me I had six minutes, so I picked some of the best shots for the team. I shot some balloons from mid air behind the back, six arrows at once, and then some smaller balloons. Then it was time for the baby aspirin shot. I had the thrower toss three baby aspirin into mid air. It took a few attempts but the third shot did the trick.

The team headed for practice and Coach Brown grabbed me and we did a media interview. I gave him one of my special signed arrows and he told me it would be on display in his office. He signed a football for my son Gus and then signed the bow limb of the special burnt orange Hoyt Formula RX recurve bow. I like Mack Brown. As a coach and a person. He’s the real deal. It was a big honor for me to be there at that time and do what I do for Coach Brown and the team. I remain a fan of not just the team, but of Coach Brown. “Hook Em Horns.”

One the things I learned from the late Fred Bear is to take archery into high profile situations at every opportunity and do everything you can to get high profile people interested in the sport. The Have Bow Will Travel tour rolls on. Seeing is believing, see you at the show!