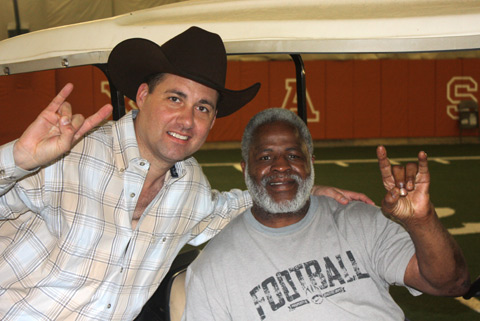 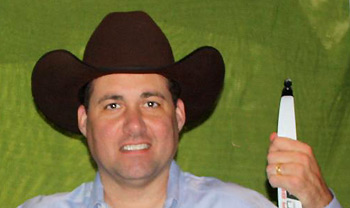 One of the highlights of my archery exhibition career has been to take archery into new venues and get people from all backgrounds into the sport of archery and bowhunting.  When I can get celebrities and high profile people involved, this is even better.  That allows even more families to be exposed to archery and bowhunting and so it goes.  This is one lesson I learned from Fred Bear, who was a master at getting famous people into the sport of archery.

On Saturday, August 28, 2010 I was in Austin, Texas to perform an exhibition for the Earl Campbell Gala at the Cool River Cafe.  This Gala was to kick off the upcoming Southern National Archery Festival, which is scheduled to start September 2 and run through September 5, 2010.  Bowhunting.net’s Robert Hoague will be with me at this event and will be posting updates during the Festival!  Be sure and keep your eyes on this site Sept. 2-5, 2010!

During my first visit to Austin, I met Earl Campbell at the University of Texas football field.  There he introduced me to the University of Texas’ football coach Mack Brown.  I have admired Coach Brown for a long time.  When his team won the National Championship in 2006, in the locker room after the game he told his team not to let that winning football game be the best thing they ever do in their life, he told them to let it be a stepping stone.  I have since admired him for developing young men and helping them keep their priorities in order.  So it was a big honor when Earl Campbell introduced me to Coach Brown.

Below: Coach Mack Brown of the University of Texas football team. 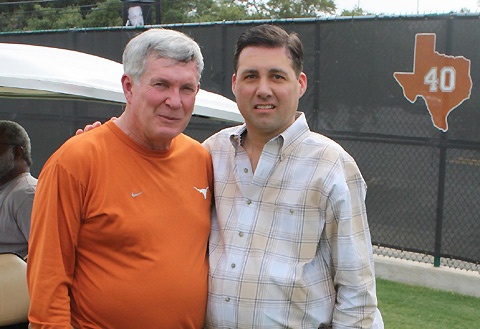 After practice coach Brown asked Earl to speak to the football team.  After Earl spoke he then asked me to speak.

Below: Frank talking archery to the UT team.

The day of the Gala my friend Butch Thompson from the historic and famous King Ranch came up to Austin to visit for the afternoon and attend the GALA with me that evening.  It was good seeing Butch and seeing his daughter, son in law and grand daughter as well.  We had a good lunch and visit.  Butch runs the wildlife division at the 825,000 acre ranch as well as some other aspects of this massive ranch.   I consider Butch one of my favorite folks and a great friend.
He has the only stage recurve bow I’ve ever given away.

Below: Frank Addington Jr. with the King Ranch’s Butch Thompson.  Addington
consider’s Butch one of his favorite people. 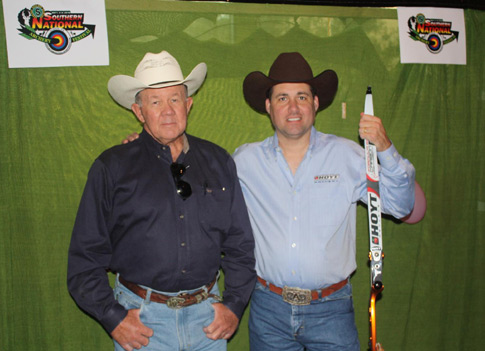 In the late 1990’s I was at the ranch doing an archery show for the owners of the ranch and Butch and I were shooting under a mesquite tree on the main lawn of the big house.  He ended up splitting a shaft with my bow and I signed the bow and gave it to him.  I have every bow I’ve ever hit an aspirin with in my 25 year career except that one.  Butch reminds me of the old EF Hutton commercial, when he speaks, people listen.  His wife and daughters have all hunted with him and now he has grandkids to get started in archery.

The night of the Earl Campbell Gala at the Cool River Cafe many people showed up to support the event and have an opportunity to see the great Earl Campbell in person.  Earl took photos with everyone and also signed autographs for the crowd.

After a great dinner the MC introduced my show and I performed some “bow and arrow razzle dazzle” for the crowd.  We’d set the net up in the banquet room and Dennis Minks tossed targets for me.  Butch and I were at the head table with Earl and they had a front row seat for the show.
The end of the show was the three baby aspirin–three arrow shot and the audience loved it.  Afterwards I signed some publicity photos for the audience and then asked Mr. Earl to sign my bow.

Below “The Tyler Rose” and NFL Hall of Famer Earl Campbell signs Frank’s bow after the show.  Notice the bow is the burnt orange color similar to the University of Texas. 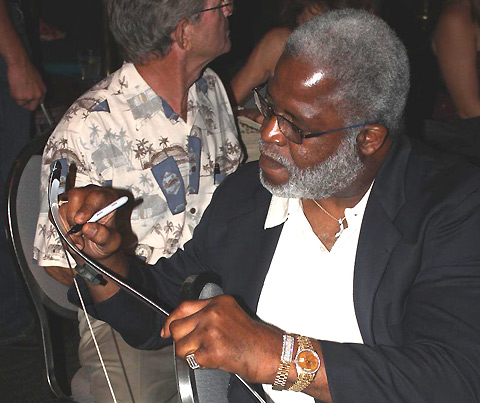 On September 2 I will be back in Austin to perform at the University of Texas for the team and then at the Southern National Archery Festival that weekend.  This being Texas, everything is bigger.  In addition to the archery events, which are many, they also have other family events scheduled including a redneck parade, cook off, Earl Campbell Football tailgate party during the UT game, games, and great country music shows by acts like Tayna Tucker and Asleep at the Wheel.

Watch for Bowhunting.net’s Robert Hoague’s Live Updates on what has been called, “The Super Bowl of Archery” by some.  I’ll be back in Texas with my exhibitions for the event.  The 2010 HAVE BOW WILL TRAVEL tour rolls on.  Seeing is believing, see you at the show!
If you would like to read more about this exciting event, visit: www.SouthernNationalArcheryFestival.com.
Tags: Earl Campbellfrank addingtonsouthern national archery festival
Previous Post