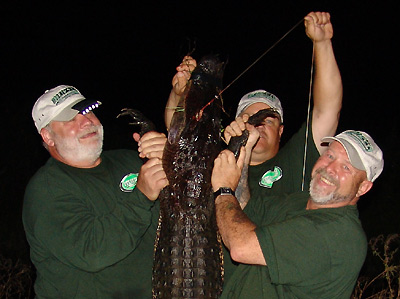 Today Chef Klaus’s gator luck was gonna change. That right 5 seconds was on its way.

We drove the levees again, watching and glassing for gators. We had a few gator sighting and stalks but no success. David turned the truck toward an irrigation pond. This pond was “L” shaped so we didn’t see the gator that was around the corner until we made the turn.

We stopped and quickly made a plan. An old, falling down, pump house was nearby and David let Chef and Fred off. They got behind it and we drove around to the other side of the pond. Here is our gator. 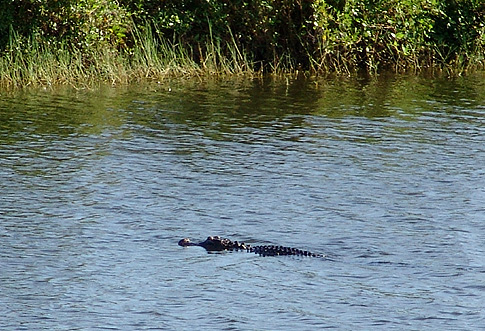 I zoomed in and took a close up. This is a big mature alligator. 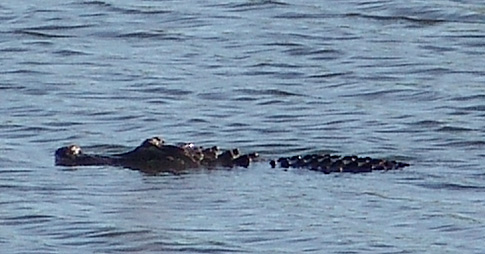 The gator was not concerned about our vehicle but it did move closer to the opposite shore line, which was where Chef was waiting with a Muzzy gator point. 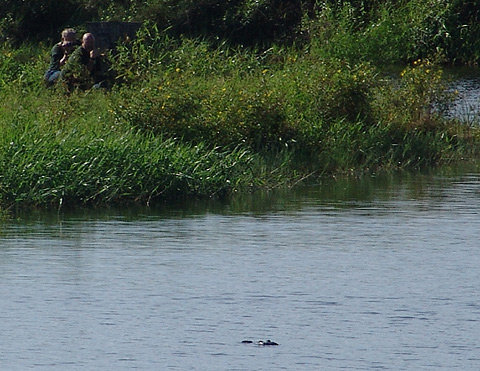 Unfortunately the gator didn’t get close enough to the shore for a good shot. We moved on.

A couple of channels later we spotted another gator and this time Chef and I spread out. Here is a picture Fred took of me hiding behind some brush. 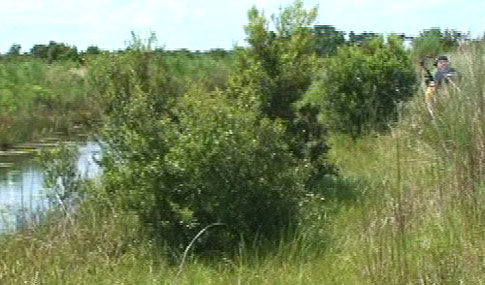 David gave a calling sequence and a gator we hadn’t seen started coming. Fred took another pic and told me that it was almost in front of me. You can see it in the water. 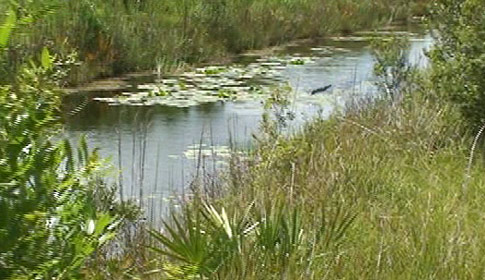 I turned on my own camera and got ready. As the gator came in view I got its picture in the channel. 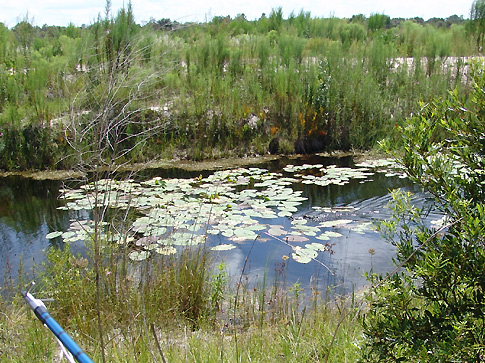 Then I zoomed in and got a nice close up of the gator swimming by.

The gator stopped a few yards in front of me and I zoomed in on it. This was tempting but I wanted the Chef to get his gator and this looked like a good chance. 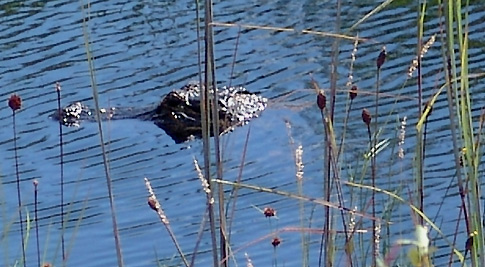 But the gator ducked under water and we didn’t see it again.

David received a phone call that James “Chef” Sutttin had our lunch almost ready. When we arrived at the lodge we had wild hog BBQ ribs, BBQ wild turkey and black beans and rice. It was delicious. 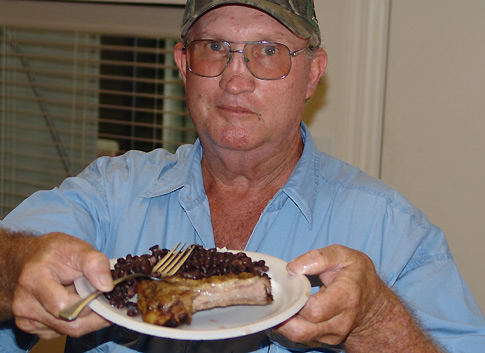 That looks good dosen’t it. And it was. 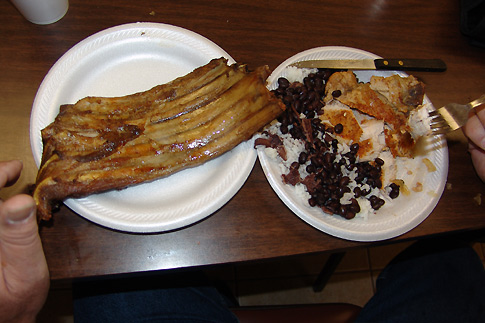 With our late lunch behind us we went back at it and had two close calls. But things were ready to change.

Daylight began to fade away. We pulled up at the end of a levee and … bingo. Two gators were in the channel, one on our end and one on the other.

David laid out our plan, get off to the side and go 100 yards up the channel, and set up in the reeds and plants along the levee’s edge. We did it.

Available light was too low for my camera to get a good picture but I took one anyway. Below David and Chef are at the edge, ready to go. 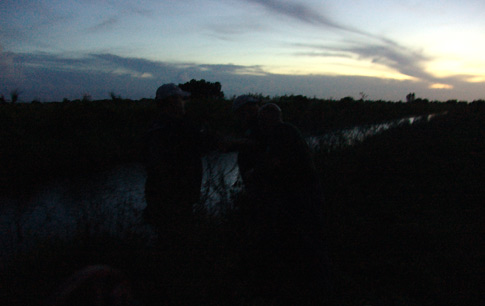 David called and right away he saw a gator coming from the left. The bank of the levee was steep and the gator was close to the edge of the water on our side. This was as close to a slam dunk shot as you could ask for. David whispered, “He’s almost here, draw.”

Chef Klaus came to full draw and saw the alligator coming. When it was right in front of him he put his pin behind the gator’s eye and shot.

I heard the loud crunch of the impact and advanced to where David and Chef were. Chef had the line and was pulling. David told him to be careful until we were certain about the hit, he didn’t want the arrow to pull out.

Here is a pic of Mike Ditschler (Chef Klaus) right after he got his first alligator. As you can tell he was very happy. (We were too.) 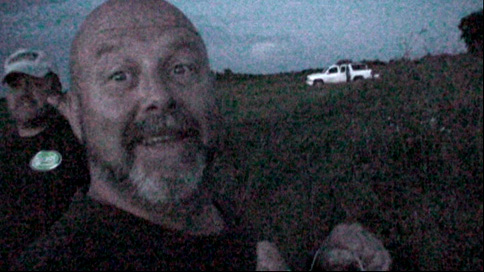 Chef and Fred pulled the gator up to the top of the levee. 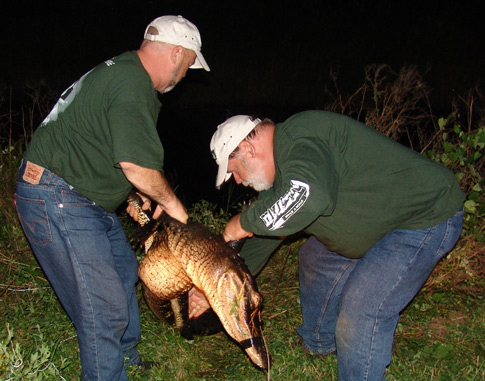 And here is Chef Klaus with his Florida alligator. 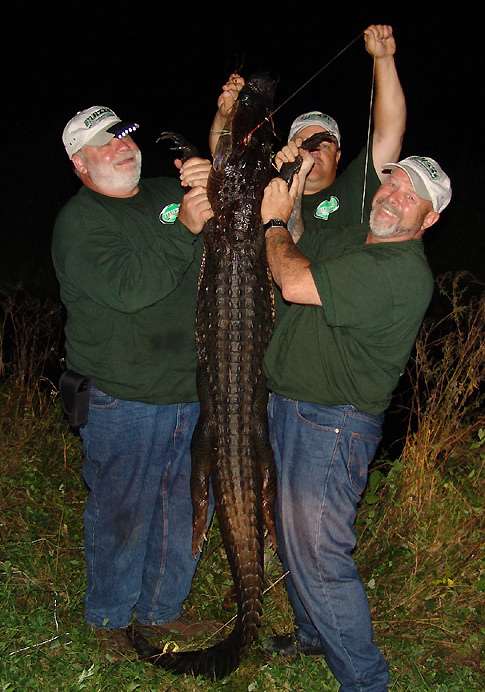 When we loaded the alligator and our gear into the tuck we returned to the lodge and put the gator in the walk in cooler. Then we sacked out so we could get a decent nights sleep.

Scouting – Are Bucks In The Food Plot?