by Robert Hoague
in Alligator, Bowhunting Posts
0 0
A A
0 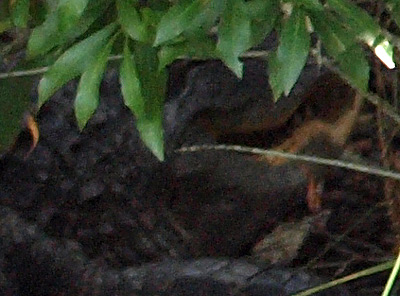 David Mills  has hunted alligators in Florida since he was a youngster. He knows as much about them as any man alive today. And he has plenty of things in his bag of gator hunting tricks.

As we drove along on one of the levies adjacent to the channels he stopped the Suburban and signaled us to come with him, quietly. He pointed at a streak in the sand between two channels and explained what we were seeing. 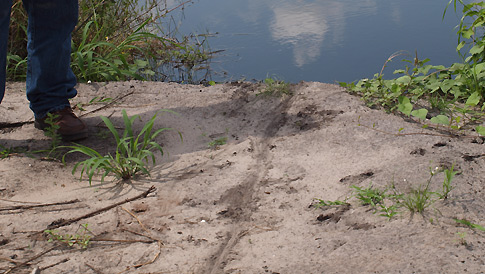 That  streak in the sand was made by a gators tail.  And he pointed out some alligator tracks. 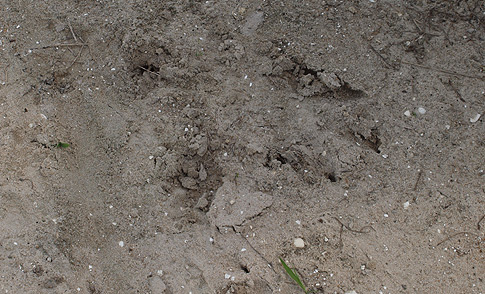 But David had another reason to stop here besides showing us gator sign. The tail drag markings and alligator tracks led to the edge of the levie and David pointed it out. He said it was an Alligator Slide. And there was something significant about this  particular slide. 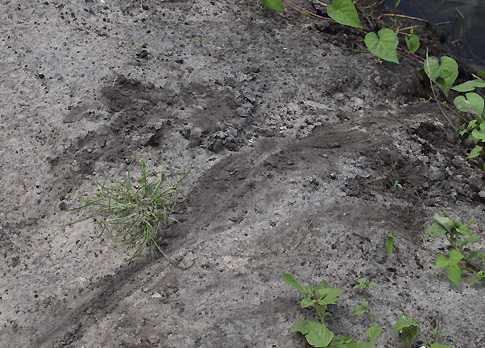 The sand was wet above the water’s edge … from the water splashing as the gator went into the channel. “See the wet sand. This is only minutes old,” said David, “the gator that did this is in the channel. Since we don’t see him in the water we will have to look thoroughly along the edges.”

Earlier we had decided the first opportunity to get a gator was Mike Ditschler (Chef Klaus). Our Chef got his bow and he and David walked down the levee, looking. We followed at a distance. Mid way up the channel David stopped. “I see a gator,” he whispered, and glassed the opposite side of the water. “It’s on,” he added. 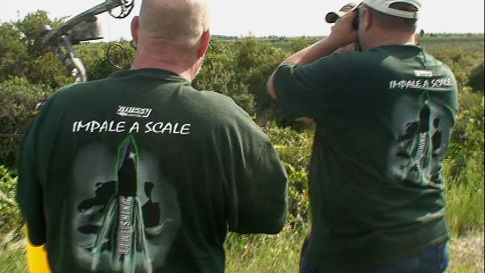 David signaled us to sneak up to them. Myself and Joe Sutton had video cameras and Fred had his digital camera, if things went well we just might have both a video and picture opportunity right here, right now.

David  pointed to where the gator was on the opposite side of the channel. It was difficult to see laying in the dark shadows. 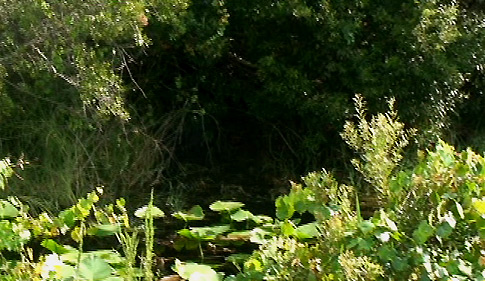 I borrowed David’s Nikon’s and saw a fat, mature alligator.  His tail caught my eye, it was blunt, it did not taper down to a narrower point.  Fred was already taking pictures or the gator.

NOTE: After this episode was over and we had time to talk about it we nicknamed this alligator No-Tail. 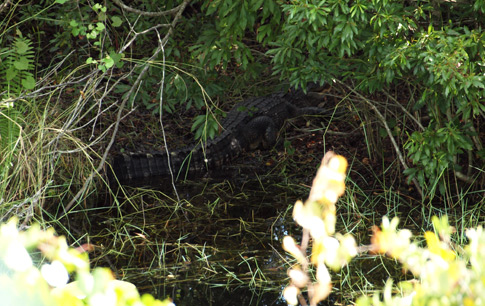 So I zoomed in more so you could see the gator No-Tail better. 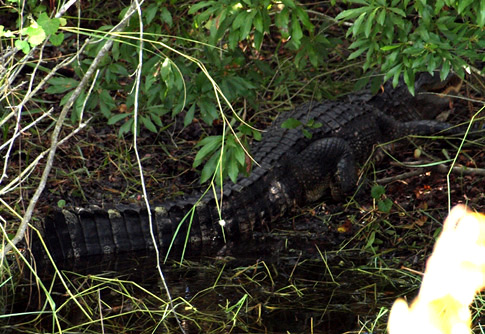 Just for grins, here is a larger picture of No-Tail. Check Him Out… 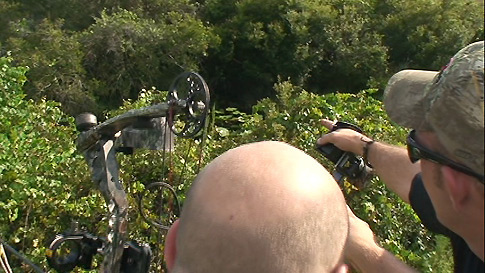 Meanwhile our video cameraman Joe Porto pointed out the gator’s position to the Chef. Then Joe got in position to video and Chef Klaus drew. Seconds later Chef took his shot. The arrow went too low and disappeared into the water.

But this hunt was far from over!  CONTINUED…

Get up to $50 back on Vanguard Sporting Optics