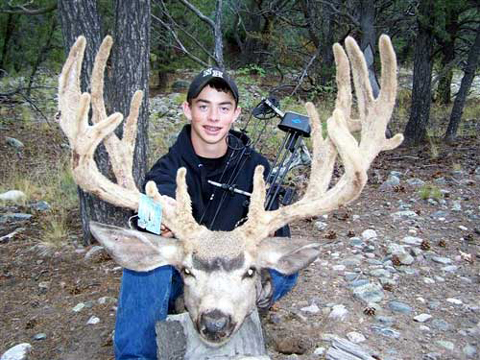 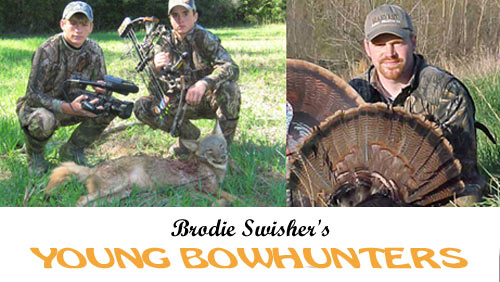 My first mule deer hunt—I could hardly wait! We were going to be hunting with family and friends in North Central Colorado. Every night after school I would take my new Razor’s Edge bow and practice, thinking about the possibility of taking a giant deer. I practiced at home shooting out of a blind just the way we were going to be hunting. My longest shot I felt comfortable with would be about 30 yards.

Finally the day came and we left. My Dad and I talked about the up-coming hunt all the way to Colorado from our home in Missouri. I’ve had the opportunity to hunt whitetails around my home area and have been successful. My Dad is an outfitter for whitetails. His hunting business is called Pawnee Ridge Outfitters and is located near Eagleville, MO.

One of the most fun things my Dad and I do each year is to host youth hunts through Kicking Bear. We’ve always had great success in taking deer with these first-time hunters. This was the first time I would have the opportunity to hunt in a different state for a giant mule deer. I was just as excited as one of the Kicking Bear kids on their first hunt!

On the first day of my hunt, while sitting in the blind, we had an absolute giant non-typical walk by with no shot opportunity. There was another great buck along with several other smaller bucks that came right in to the crab apple trees near where we had our blind set up, but after seeing the big non-typical, I had my heart set on taking that animal. My Dad agreed with me that if the non-typical was the buck of my dreams, then that was the one I should hold out for because we had plenty of time to hunt.

The second day of the hunt we sat all day and again, several bucks came through—a couple of real nice ones—but not the giant non-typical. A few of the deer came really close to our blind. I was actually holding my breath a couple times so they wouldn’t hear me breathing. We were wearing all black in the blind so the deer couldn’t see us.

On the third day of the hunt, again several deer were passing through feeding on the crab apples on the ground, when out of nowhere, two giants came in together. One of them was the non-typical. My heart was pounding hard because I knew this time he was going to be close enough for a shot. I could hear my Dad whispering to me to stay calm and wait for the right shot opportunity. It took forever for the buck to turn broadside.

After double checking my range finder, he was at 21 yards. I drew my bow and had everything I could do to keep myself calm and hold the pin behind his shoulder. Just like that, I released the arrow and the buck bolted out and at the same time my Dad was whispering loudly to me, “great shot, great shot, that was a great shot!” We were high-fiving and hugging each other.

We waited an hour before we went out to track the giant non-typical. My Dad said I must have been in shock because it was the first time he had not heard me say a word. All I could remember was that I could not wait to fine my deer. He had only gone about 80 yards and dropped over. I could not believe it when I walked up and saw that giant laying on the ground. What a dream come true! Bow hunting is one of the most fun things I’ve ever done in my whole life.