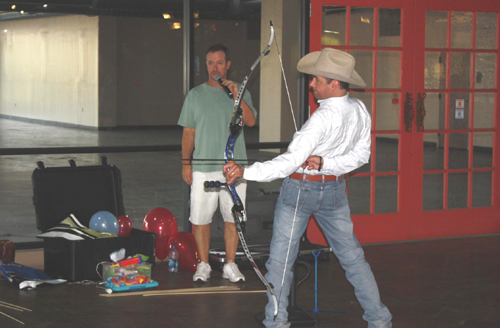 July 16-18, 2010 I was deep in the heart of Dixie for the 27th Annual World Deer Expo at the convention center in downtown Birmingham.  Show promoter Bob Coker has hosted this show for almost three decades and his hard work shows by the large number of booths at the event.   There were big crowds and lots of excitement in the air for this weekend.  If you know Bob you know he’s working on this event year round, visiting other shows, making calls, and planning.  It’s a family project and he had his wife and three daughters working too!

On Friday morning Bob and I drove over to the studio for the nationally recognized “Rick and Bubba Radio Show“.  We set up the show right outside the studio on the terrace.  I did a sit down interview with Rick and Bubba and then we did a few segments outside with my bow.  Bob had never thrown for me but did a great job.  To end the show I had Bob toss up three baby aspirin and I hit them the very first shot!  Rick and Bubba were great and we had a good time during our almost forty minutes on air with them.  Their show is #1 locally in the Birmingham market but also can be heard coast to coast on XM radio.   Here’s the video clip:

That evening I did a show for the audience and Justin tossed targets for me.  I ran into Sam Stowe and Doug Rithmire at the show, they stopped by and watched the show.  This audience was modest but we’d have big crowds Saturday and Sunday.  I ran into Joella Bates at the show who was there doing seminars, Tim & Shirley Strickland, Eddie Salter and Chris Brackett.  I had a booth on the show floor and met some new friends during my time there.  The show featured some good seminars and two seminar stages.
I did some shooting for the local Fox Tv affiliate in Birmingham.  Getting media attention is always good for a show and I was happy to do some shooting for them.

We had a huge crowd for Saturday’s performance.  The upstairs room was packed!  The audience was friendly and asked lots of good questions. I asked how many had heard the Rick and Bubba show and hands went up all over the room.  Sunday I did my final exhibition and with Andrew tossing targets I hit the three baby aspirin with three arrows the very first shot!   My Hoyt Formula RX bow is shooting GREAT.  Special thanks to Justin, Andrew and Bob–my target throwers for the weekend.

I left Birmingham knowing why they call it “Sweet Home Alabama” and hoping to get back there soon.   You can visit the show website at: http://www.birminghamdeershow.com/

Here’s a letter from show promoter Bob Coker I received via email after the show:

I just wanted to thank you for helping make this years EXPO the BIGGEST show ever. I have been trying to get on the Rick and Bubba show for a long time and finally I had an attraction that they felt worthy to interview on their show. Rick and Bubba are truly an icon in Birmingham and being on their show was a priceless marketing tool.  Frank, you truly have a talent, a great message and a tremendous way with the crowd.

Hope to see you soon, your new friend,