The Way it Was – With Dubb Wallace 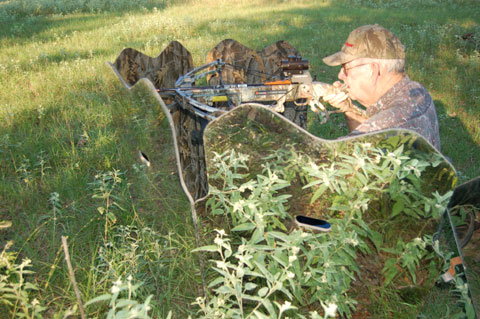 James ‘Dubb’ Wallace, at age 76, is still a very active outdoorsman. Here he’s taking aim from behind his GhostBlind at a wild hog down in Trinity County, hunting with B & B Outfitters near Groveton. Photo by Luke Clayton 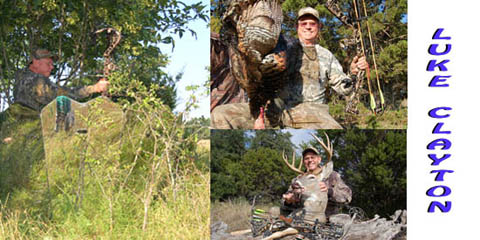 Back in the mid thirties, my buddy James ‘Dubb’ Wallace was born on a ranch in the back woods around Campwood in far west Texas, not far from the Mexican border. This country remains rough today but I can only imagine what it was like when Dubb was a boy.

For the past couple decades, Dubb and I have spent a lot of time together fishing and hunting, I’ve been privy to many hours of conversation with this veteran of the outdoors around the campfire and during slack times on fishing trips. Some of the details I can relate here, some are best left for around the campfire. You see, Dubb has seen and experienced things that are now in the past, things and times that will never come again, except when brought to life via the vivid memory of his 76 year old mind.

Dubb normally doesn’t spend a lot of time talking about his past, he’s way too busy living in the present but, probably because of my years as an outdoors journalists, I have a tendency to ‘pick his brain’! I’ve learned a lot of interesting facts from the old days with questions such, “What did you eat during the fall and winter when on those weeks on end trapping trips?”

Much of Dubb’s tales include his Dad, who I would have loved to have known. “Dad worked on the huge sheep and goat ranches that are still common in southwest Texas. In the fall, he would set up a trapping camp and I would get out of school and spend several weeks living in a make shift shelter with Dad and his trapping partner. We lived primarily off the land. We’d bring staples such as flour, salt, baking powder, coffee but we lived on a diet primarily of biscuits and wild game.” says Dubb.

Dubb can vividly recall even the minutest details of his boyhood trapping adventures in what was then a virtual wilderness. “On some of the big ranches, there were herds of goats that had never seen a man. They were wild as deer. There was no way to catch and pen them and they were left alone to fend for themselves. Deer and turkey were really easier to hunt then these wild goats but when the opportunity presented itself, we’d shoot a younger goat for the meat pot.”

When asked how food was kept fresh without refrigeration, Dubb recalled there was always a couple of big, cast iron skillets on the side of the cookfire, the type with a recessed lid that served double duty cooking meats as well as baking biscuits. “Dad was the chief camp cook. He would cube steaks and roasts from deer or wild goat, season it well, Mexican style, and let it simmer on the side of the fire. He kept this pot of very flavorful seasoned meat heated at all times and when we were hungry, whether it be for the breakfast meal or supper, we would open the pot and ladle out an big bowl. He made some of the best ‘cat head’ biscuits I’ve ever eaten. These would be baked in one of the skillets before daylight. We would grab a biscuit and coffee before heading out to check the trap line and return mid morning for a big brunch and maybe an hour’s nap before heading out to run the trap line on the opposite side of camp.”

You must remember that back in ‘the day’ in remote Texas, living on game and fish was a way of life and today’s game laws were in the far distant future. Dubb says his favorite meal was wild turkey poults that his dad would fry in sheep tallow in the cast iron skillet. “He would quarter up the turkeys, season them well, dust them with flour and fry them to a golden brown, then put the heavy lid on the skillet, layer the top with coals and let them bake until they were fall off the bone tender. If someone would open a fast food restaurant today and serve this dish, they’d become an overnight success!”

Travel was on horseback or ‘mule back’ back when Dub was growing up and he says it was miles between ranch headquarters. “When a rider showed up at any of the ranch headquarters, they could depend upon a hot meal for themselves and food and water for their horse. “We kept a house in Campwood and during the school year, we kids would usually live in town with our mother. I was about as wild as the game we hunted and trapped and always felt out of place living so close to so many people. I would day dream at school about when I could get out and head back to the wilds with my dad. When he was fortunate enough to work on a ranch closer to town, we would sometime live with him year around on the ranch. Fur trapping supplied a big portion of our income and Dad was as good as they come trapping ringtail, coon and fox.”

Fish were plentiful in the many Hill Country Rivers and streams. Dubb says when his family got ‘fish hungry’, catching supper was easy. “Most all the streams were crystal clear and many had holes 12-20 feet deep, usually around bends. You could see those big channel catfish and bass and perch hanging in the deeper holes. They had never seen a bait and were suckers for grasshoppers, earth worms or crickets. We ate a lot of fresh fish, cooked, of course in those huge cast iron skillets.”

I’ve got another day trip planned with Dubb this coming week. He still runs a bull dozer a couple days a week on a ranch down near Lake Whitney, cutting roads, plant food plots and clearing cedar. We will fish for bass and catfish on a lake on the property. We’re planning a big fish fry for the noon meal, but this time the cooking will be done on a Coleman stove and instead of sheep tallow, I’ll be using Canola oil! Times they do change!

Listen to Outdoors with Luke Clayton radio at www.catfishradio.com. Contact Luke with hunting and fishing news from your area via email through the web site.

OUTDOOR TIP OF THE WEEK– Lake Lavon, TX crappie guide Billy Kilpatrick (www.straightlineguide.com) rates crappie fishing an 11 on the ten scale. The guide says he has been catching crappie deep all summer but last week they moved into water 10-12 feet deep and are stacking up around standing timber in large school. Live minnows are working best but good jig fishermen can also do well. “We’re catching limits on every trip. The trick is to move to a another tree when the fishing slows. These fish are in transition from deep to more shallow water and they will remain at these depths until the onset of cold weather, they will move back into deeper water.” The guide says this is a seasonal pattern that works for crappie on every lake he’s fished. Contact Kilpatrick at 214-232-7847.